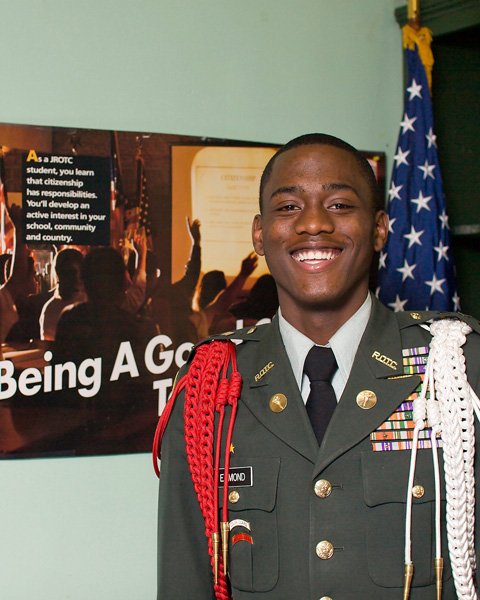 In a bustling Jim Hill High School hallway, students are yelping and shouting to one another joyfully, but one student remains unfazed by the exuberance.

"My long-term goal is to be commander-in-chief of the United States of America," Edmond says.

To many, this goal may seem overreaching for a teenager, but Edmond is no ordinary high school student. Edmond recently won the 2009 Junior Reserve Officers' Training Corps Cadet of the Year award in the Jackson Public School District.

To earn this distinction, Edmond participated in four highly competitive events. The first challenge was to complete a personal portfolio three weeks prior to the competition. Next, Edmond took a test on JROTC basic curriculum knowledge. Following the test, Edmond delivered a 5-minute oral presentation about how JROTC has prepared him for a successful life after graduation.

The final task was a grueling physical training assessment, including a 1-mile run. Following the four events, the judges tallied and averaged each individual's scores.

"I knew there would be stringent competition, but I never doubted myself. I just wanted to go out there and do my best," Edmond says. And he did the best.

As the top cadet in a field of 2,000 students from all eight JPS high schools, Edmond serves as brigade commander. On March 31, Edmond led the JPS JROTC in a series of exercises inside the Provine High School gym.

"I truly cannot imagine my life without the JROTC program. Before joining, I had low self-esteem. I never looked forward to anything in school. Since then, I have gained self-confidence," Edmond says.

JROTC has also afforded Edmond with several post-graduation opportunities. Twenty-eight colleges and universities have accepted Edmond to attend their schools. Edmond has also received an astounding $2.1 million in scholarship offers. Although it was a difficult decision, Edmond has chosen to attend the U.S. Naval Academy in Annapolis, Md., starting this fall.

"I visited the naval academy in January and enjoyed the trip. At the academy, it is all about being a union. It is not about individuality. I like their camaraderie," Edmond says.

Edmond plans to major in physics and minor in Spanish. After serving in the Navy for several years, Edmond hopes to become a Spanish professor on the collegiate level.

"Teachers solidify your success in any endeavor," Edmond says. Whether Edmond ends up in a classroom or the Oval Office, expect him to be successful.