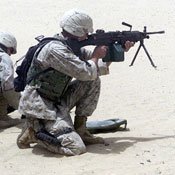 Freedom isn't free. Throughout the course of our nation's history, men and women have given the ultimate sacrifice to represent the United States in times of war. The services they have provided are invaluable, and we are forever indebted to their efforts. One way to give back is to donate household items that we typically take for granted, such as deodorant and nail clippers. Here are a few of the hundreds of charities that support our troops overseas.

http://www.give2thetroops.org
From now through August, the Give2TheTroops "family" is requesting items to donate to the troops to keep them cool in the hot desert sun. Anything from plastic water bottles and electrolyte tablets to sunglasses and popsicles can be sent. Financial donations also accepted.
Also visit: http://www.USO.org, http://www.treatanysoldier.com, http://www.treatsfortroops.com

http://www.soldiersangels.org
If you are an expert seamstress or just a casual hobbyist, you can help the sewing team by knitting or crocheting blankets, scarves and helmet liners for the troops to comfort them at night. Soldiers Angels also sends drawings, handmade walking canes and even gourmet birthday cakes among other services.

http://www.booksforsoldiers.com
Instead of giving away your used books, send them to troops overseas. During their downtime, soldiers have very limited means of entertaining themselves. Shipping books to these men and women is a great way to show your support.
Also visit: http://www.subsforsoldiers.com

http://www.cellphonesforsoldiers.com
Two teenagers, Robbie and Brittany Berquist, started this program with $21 of their own money. Since then, Cell Phones for Soldiers has raised almost $2 million and given more than 500,000 prepaid calling cards to soldiers serving overseas. The service also allows users to give calling cards to specific troops or units. Old phones are sent to ReCellular, an electronics sustainability firm, which pays for each donated phone. AT&T has pitched by opening all 1,800 of their company-owned wireless stores across the country as drop-off sites to recycle the used cell phones.

http://www.anysoldier.com
Anysoldier.com sends care packages to troops all over the world. The Web site also allows users to search for specific members of the armed forces. Know of a local soldier who you would like to support? Search for them on the site and then send whatever you'd like. The program started in 2003 when Marty and Sue Horn decided to assist their son, Sergeant Brian Horn, who was fighting in Iraq. Originally, the Web site was designed to support members of Horn's brigade. Since then, the site boasts of helping over 1.3 million troops serving overseas.

http://www.cigarsforsoldiers.com
Yep, even cigars. Cigars for Soldiers also accepts monetary donations and other necessities, but their main focus is cigars. The group's Web site features a photo gallery of several U.S. troops posing with their new gifts. The site also holds online auctions where bidders can win cigar humidors autographed by notable cigar smokers such as Ted Nugent and Rush Limbaugh, and the proceeds go to the troops. After a long day of defending our freedom, help the soldiers kick back and relax with a stogie and a smile.

http://www.heromiles.org
The program allows family members of injured troops to fly overseas to visit them for free. Soldiers can also return home for special emergencies, all thanks to generous donations. Congressman Dutch Ruppersberger of Maryland started the program after hearing complaints about how expensive it was for soldiers to see their families. Participating airlines include Delta Airlines, United Airlines and American Airlines. Donators can assist by giving their frequent-flyer miles to the program.
Also visit: http://www.miledonor.com