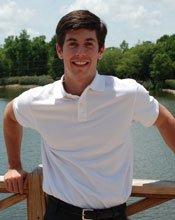 Micajah Sturdivant stands on a sun-dried deck behind the MMI Management building gazing across a small lake and laughing about the number of geese bathing in the water. "Those birds will drive you nuts," he says.

Sturdivant leaps downs from the wooden ledge and heads toward MMI's rear entrance. He is all smiles as we sweep inside the air-conditioned building. It may seem like another day of fun and games for Sturdivant, but this is just a short break from an otherwise strenuous day at work.

As director of asset management for MMI Hotel Groups, Sturdivant, 29, manages properties for the company and third parties. Although the job may sound like a bore, Sturdivant enjoys every minute of it. "I am always dreaming of what's next. It doesn't bother me to come up with 40 bad ideas before one of them actually sticks," he says.

The Delta native grew up on a cotton plantation but always had dreams of living elsewhere. After graduating from the Sally McDaniel-Barksdale Honors College at Ole Miss in 2001 with a business degree, Sturdivant moved to Memphis to work in commercial lending. In 2004, Sturdivant followed another dream. He applied to the Harvard Business School.

"I thought, 'Everybody needs a Mississippi boy sometimes.' I rolled the dice, and I guess the moons were aligned. Both my father and my grandfather were HBS graduates, so it was a very special for me," he says.

While at HBS, Sturdivant realized he didn't want Harvard to be a stepping-stone to some cushy job in New York or D.C. He knew his heart belonged in the South.

"Too many people leave the state and never come back," he says.

After he finished graduate school, Sturdivant was offered a position with MMI, a company his grandfather started with his Harvard roommate. "They told me I could either come now or wait five to 10 years and deal with the decisions that were made by the person before me. It was a great selling point," he says with a chuckle.

As a new Jackson resident, Sturdivant has already become actively involved in the community. He is a recent graduate of Leadership Greater Jackson and in 2008, Sturdivant started The Phoenix Club, a charitable organization benefiting the Boys and Girls Club. The Phoenix Club targets young Jacksonians who otherwise may feel "too" young to participate in philanthropic functions. By holding non-traditional charity events such as "Seersucker and Sombreros," young people are drawn to the Phoenix Club and the opportunity to meet other young Jacksonians who also want to help.

"For me, Jackson has been very entertaining. There is a buzz right now," he says. "I love being a part of this renaissance.