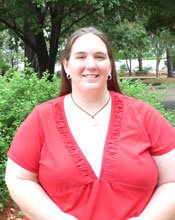 Heather Ivery, the city's homeless program coordinator, said that communities must address homelessness where it is, not expecting the homeless to come for services in other areas.

On their way to a local shelter for lunch, a steady flow of homeless people stop to greet Heather Ivery, who is sitting on a wooden bench in Smith Park. Instead of being startled, Ivery is at ease as she chitchats with her "clients" about their lives and their plans for the day. As the homeless program coordinator for the city of Jackson, this is part of Ivery's everyday work.

The 28-year-old first became interested in serving others as a young child in Raymond, where she traveled with local church groups into the city to volunteer at soup kitchens and homeless shelters.

"I just got that bug, that desire to be there. It was there that I created friends with both the staff and the clients," Ivery says.

"I majored in biblical studies because I couldn't figure out what else to do," Ivery says with a grin. But she soon found her niche.

During her freshman year, Ivery started volunteering with Stewpot Community Services where she worked with after-school programming, the senior and mentally disabled programs, and as the director of opportunity. Through a stipend from AmeriCorps, she was able to work for the non-profit organization full-time while in school.

Once Ivery completed her two-year service through AmeriCorps, Stewpot offered her a full-time position. She remained with Stewpot for 10 years until August 2008 when she found out about the job with the city.

"The position had been vacant for some time," she says. "With my experience with the homeless, I had the opportunity to hear about the different issues affecting them. I realized that by working on a city-wide level, I could impact not just an individual, but maybe the overall situation."

Ivery's goal is to implement the city's 10-year plan to end chronic homelessness. The plan includes educating citizens about issues affecting the homeless and improving social services. Her biggest challenges include finding a place for the homeless to peacefully exist, and encouraging them to empower themselves. Each Tuesday morning, Ivery hosts a weekly meeting in Smith Park to enable the homeless and homeless advocates to confront these challenges.

"A majority of the homeless do not cause problems. We want them to police themselves and to discuss their issues amongst one another," Ivery says.

One of the joys of working with the homeless is having a friend on nearly every street corner.

"I'll be walking home from work, and by the time I reach my house, I'll have 10 people walking right beside me," she says. "It's nice."