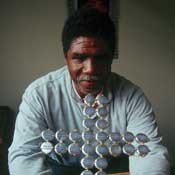 A storage closet inside a homeless day shelter is an unlikely studio for well-known Mississippi folk artist McArthur Chism. But these days Chism is just glad to have a quiet space where he can thread the bottle caps he collects with wire hangers and make crosses, birdhouses and frames.

Galleries throughout the state sell Chism's work including The Attic Gallery in Vicksburg and Cat Head in Clarksdale. Numerous publications have published stories about the 69-year-old artist, and the Mississippi Arts Commission featured his work in the "Crossroads of the Heart" exhibit that toured the state in 2001.

The Glendora, Miss., native grew up in Water Valley, but has lived in Jackson for the majority of his life. He is now partially blind and relies on his motorized wheelchair for mobility. On April 1, Chism became homeless after the rent on his apartment increased. Chism, who receives Social Security disability payments, had been struggling to pay medical bills from two surgeries he had last year and could no longer afford to pay rent.

Now, Chism spends his days making his art at Stewpot Community Services' Opportunity Center on West Amite Street until 4 p.m., when it closes. At night, he drives his wheelchair through west Jackson's pockmarked sidewalks to the Billy Brumfield House Men's Shelter or the Gateway Rescue Mission on Gallatin Street.

Whenever he has money from selling his art, he spends a night at the Sleep Inn on Gallatin Street. The battery on Chism's wheelchair must recharge every few hours and can present an additional challenge for seeking shelter.

On the night of May 5 the shelters were full, and Chism slept in his wheelchair under a bridge. It wasn't the first time.

"He's sold some pieces lately, and some of the galleries have sent him checks," says Heather Ivery, director of the Opportunity Center.

"But it's one of those things. When you become homeless, a hundred dollars isn't going to help you."

Wearing a tucked-in collared shirt and dress shoes, Chism shows few signs of distress. He works calmly on his art, which requires a steady hand and a good deal of patience. A birdhouse can take up to eight hours to make, and a cross takes about an hour. His work usually sells for $100 or less.

"It will cut you quicker than a doctor will," he says about the sharp edges of a bottle cap.

Ivery says that when Chism first came to the center he was in distress because he had no place to keep his tools or artwork. She helped transport his tools--a hammer, pliers, bottle caps and hangers--and cleared a place for him to work.

"It's definitely therapeutic for him," she says.

Ivery said she is trying to get Chism involved with HEARTworks, a program based out of Stewpot Community Services that provides opportunities for homeless men and women to sell their work. His work will also be on sale at the Arts Alive! Festival at Smith Park, May 13 and 14.

Last April, the Opportunity Center closed due to lack of funds. In November, the center reopened with funds from an anonymous donor that would keep the day shelter going for six months.

The center serves an average of 100 of the city's homeless population a day by providing a laundry and showers, along with access to phones, computers and mail. It also serves as a pickup site for day labor.

The Opportunity Center partners with the city and other local agencies to provide mental-health services, housing assistance, employment services, alcohol and drug therapy and GED classes.

Ivery says that the donation from the private source runs out at the end of May. The center has a few small grants to keep it afloat for a little longer, and is seeking a long-term source of funding.

Opportunity Center clients will host a car wash from 9 a.m. to 2 p.m. May 14, to raise funds for the shelter. Suggested donation is $5 per car.