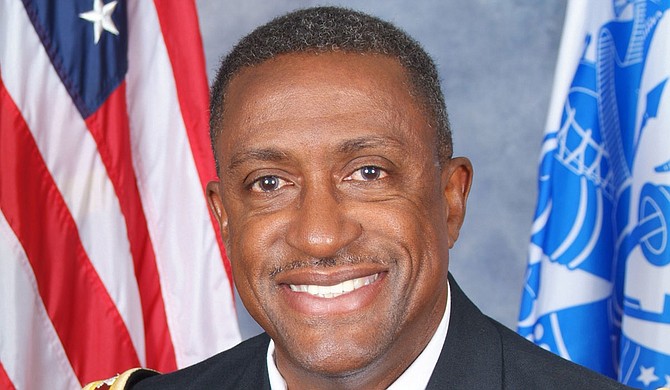 JACKSON, Miss. (AP)—Growing up in the small Mississippi town of Edwards, retired Army Col. Paul Willis had little exposure to opportunities, but while participating in the Reserve Officer Training Corps during college, he opted for a military career that took him across the nation and overseas.

Now, he’s using his knowledge and training to expose Junior Reserve Officers’ Training Corps students in Jackson Public Schools to opportunities and careers. His cadets are averaging a graduation rate nearing 100% and getting millions of dollars annually in scholarships.

Because of his work, the Clarion Ledger is recognizing Willis, director of Army Instruction with the ROTC program at JPS, as its 11th “Community Hero.”

“Back in the ’80s, I was an ROTC instructor at Chicago State University,” Willis said. “I felt the passion for working with young people. I told myself, if I ever had the opportunity to work with high school students, I was going to do it.”

After 25 years in the Army, Willis decided it was time to retire in 2004. Almost miraculously, Willis’ next opportunity came immediately when the position at JPS opened up.

'I Can See Myself in the Students'

“My wife and I had already purchased a home in the area in the year 2000,” Willis said. “We bought that property while I was stationed in Germany.

He said he had no clue about the job opportunity at JPS. “It was like divine intervention. It was perfect timing.”

Willis said the JPS JROTC program was already solid when he arrived, but he saw opportunity for growth.

“I guess the biggest part of it is I can see myself in the students,” Willis said. “I grew up in Edwards, 25 miles west of Jackson.

“I had no awareness of the opportunities that existed. Again, I could see in myself what I see in the young people. Young people, and a lot of parents, don’t know what’s out there.

“I saw opportunity to make improvements and provide greater exposure for the students. I got busy putting programs together that were needed for giving the students the exposure and positive experiences needed to develop their potential.”

In partnering with various entities, Willis has developed a number of programs. At Mississippi State University, students spend a week living on campus and work in geoscience and engineering labs. At Jackson State University they learn about chemistry. At William Carey University in Hattiesburg they explore health-related careers. He’s also put legal and aviation careers on the radar.

“We want them to see what they can be,” Willis said. “When they get positive experiences, it broadens their horizons. It inspires them to want to do more and be more; to strive to meet their potential.”

Graduation Rate Up, Absenteeism Down

Willis said the annual average of graduating cadets who are accepted into college or some other continued learning program is 95% and some years it’s 100%. According to the auditor’s report, in the 2018-2019 school year, 288 cadets graduated with a 96.8% college acceptance rate and $10.1 million in scholarships.

‘Wouldn’t have made it’ without JROTC, student says

Ramiyah Thompson, 17, a senior at Wingfield High School, is in the JROTC program and said it has shaped her career path. She plans to attend college to study biology or meteorology and is currently waiting to see what scholarships she is offered.

“If I had to go through high school without the JROTC I wouldn’t have made it,” Thompson said. “In the ninth grade they literally give you a development plan.

“They give it to you to keep you on track to be successful. It really worked. The JROTC students are the top students in the school. In GPAs, I think all of us have a 3.0. If not, they’re close.

“I got many opportunities to go to Mississippi State and work in the STEM (Science, Technology, Engineering, Math) program. They helped me understand what I can do. It’s given me opportunities other students don’t have.”

“I think one of the things I’d say about it is he’s been able to bring a very successful culture from the military...” Foote said. “You know what you’re dealing with and what’s expected. He’s brought that into the Jackson Public School system very successfully.”

Willis said the program would not be the same without dedicated and patient instructors who go above what is expected and work beyond the 8 a.m.-5 p.m. model.

“I ask a lot,” Willis said. “I know I do, but the reason I ask a lot is because our students deserve a lot. Without these instructors in these schools, there’s no way we’d be successful.”

“After 25 to 26 years in the military, he comes up with a plan with other administrators and we make it happen. When you have a good leader, we can take it from there.”