Infrastructure Funding Could Include Tax Increases 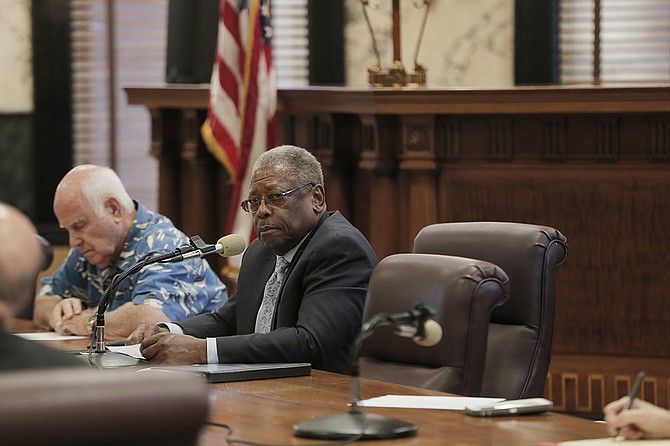 JACKSON — Mississippi senators met in Jackson last week to explore ways to raise more money for the state's deteriorating infrastructure, The move seemed to contradict their leader, Lt. Gov. Tate Reeves, and his insistence that he will not raise taxes.

The Senate Transportation Committee heard from several agency directors and engineers on how bad the state's infrastructure is, why the feds came down to close several bridges earlier this summer and how much money they could raise by increasing taxes on everything from gas to liquor.

The August meeting is a long time coming for the Senate compared to House Speaker Philip Gunn's continued persistence all year long that the two chambers work on transportation funding issues together. Gunn proposed myriad ways to raise more funds before the special session in June—all to no avail.

Sen. Willie Simmons, D-Cleveland, chairs the Senate Transportation Committee, and he asked Kathy Waterbury, with the Department of Revenue, to prepare estimates for several tax increases. Mississippi has not increased its gas tax since the 1980s, and consequently, the state's gas tax is flatter and lower than all neighboring states.

"If you raise the (gas) tax 10 cents a gallon, we collect an additional $224 million," Waterbury told senators last week at the Capitol. "We have the cheapest gas tax in the neighborhood."

Waterbury presented several proposals that showed how increasing gaming, tobacco and liquor taxes could increase revenue for roads and bridges. Waterbury said the Department of Revenue does not take a position on any of the tax-increase estimates she presented.

She said the proposals came from Simmons and other lawmakers in past years. Most of the taxes Waterbury discussed were user-based taxes, meaning the tax is directly on the consumer using a specific product.

Tax revenues are close to meeting projections so far this year, but lagging a bit. Waterbury said revenues are within a percentage point or so of where they were at this time last year.

"The sales tax is not growing like it did in the past," she said. "There are a lot of people who have lots of ideas about why—the Internet, the economy and compliance is a huge part of it."

The Legislature also passed the largest tax cut in Mississippi history in 2016, which took effect in July. Lt. Gov. Reeves had a large part in passing the tax cut, which is likely part of the reason he is opposed to increasing taxes on the other end.

Reeves was not present for the transportation meetings last week, but his Communications Director Laura Hipp said his stance on raising the gas tax has not changed.

"Since 2011, the Legislature has appropriated more than $7 billion for Mississippi roads and bridges. Lt. Gov. Reeves believes we should direct more money to maintenance and repairs, and he believes we can do so without raising the gas tax and without implementing an illegal tax on Internet sales," Hipp said in an emailed statement. "One initial step is the state must do a better job prioritizing current spending while targeting inefficiencies in what has become a large bureaucracy."

How Bad Are the Bridges?

Earlier this summer, the Federal Highway Administration closed 64 of 120 bridges they inspected in Mississippi, and Republican senators wanted to know why. County engineer Jeff Dungan told lawmakers that FHA focused on Mississippi's bridges because of our current "timber bridge crisis."

"Mississippi has more bridges with timber substructure in critical condition that are still open to traffic than any other state in the nation," Dungan said. "...There are 2,338 to my count bridges that have timber components."

Hinds County has the most timber-based bridges in the state. In FHA's initial inspection, officials looked at six bridges in Hinds and Madison counties, closing four of the six. Lawmakers still expressed concerns that federal engineers closed 64 bridges, despite county engineers thinking the bridges were fine to operate on. Not all timber-based bridges need to be completely replaced, but Dungan said it is a "sooner versus later problem."

"Later would obviously be better for everybody, but some of them are deteriorating to the point where it wouldn't be economically wise and where we shouldn't spend money (on repairs)," he said.

The bridge closures were a result of professional opinions, less based on quantified measures, but all of the timber-based bridges were at Category 2.   Bridges are ranked on a scale of 1 through 5, worst to best. A Category 2 has advanced deterioration with cracks in the concrete, State Aid Road Construction Director Carey Webb told senators last week.

Many Category 2 bridges are posted at the lowest point, meaning they have a 6,000-pound weight limit, and many only have one house on the other side of the bridge.  Webb said some of the bridges that federal workers closed are already repaired and back open—but it largely depends on county funding.

"Some counties are getting out there and doing their repairs, and some remained closed," Webb said.

Beyond bridge infrastructure woes, the state's pavement is deteriorating at a rapid pace. James Williams, chief engineer at the Mississippi Department of Transportation, told senators that the state's road woes are in part due to the state's geography.

"Mississippi is blessed with a lot of things, but what we're not blessed with is the ideal existing soils to build roads," Williams said. "Our soils and our embankments are built out of materials that a lot of states would not allow... importing materials is cost-prohibitive, so we have to design and build roads with the things we have here in Mississippi."

Using those materials has consequences, and once pavement cracks and water gets in, the cost of repair goes up. The cost of maintenance is cheaper than replacing and reconstructing roads, Williams said.

"(Some of) our system is in poor or very poor category so to fix those roads, it will cost six to 14 times the amount it would have cost us then if we'd just overlaid them," he said.

The Mississippi Department of Transportation estimates that it needs an additional $400 million a year to repair the state's roads and bridges, Director Melinda McGrath told lawmakers. The state system of roads supports 90 percent of commerce traffic, needed to support business across the state. With current funding shortages, MDOT has put all of its capacity projects on hold to make necessary repairs to roads and bridges that are deemed public safety concerns.

Sen. Hob Bryan, D-Amory said that while some Republicans appeared to be okay with a tax increase, lawmakers could instead repeal parts of the Taxpayer Pay Raise Act, which will divert millions of dollars from the state's treasury in the next 15 years. Part of the tax cut included eliminating the 3 percent income tax bracket, which Bryan said would equal about the same amount of money annually that raising the gas tax by 7 cents would.

"All we have to do is come in here next year and stop that nonsense, just freeze the 3 percent bracket (tax cut)," Bryan said.

"And the fact that we're not doing that clearly shows that what's going on is yet another attempt to have tax policies which reward the wealthy and the most fortunate ....and to make life as miserable as we possibly can for the average, working (person)."

Correction: This story has been updated to show that James Williams is the chief engineer at MDOT, and corrected to show that Melinda McGrath leads the department, not Linda. We apologize for the errors. Comment at jfp.ms/state.