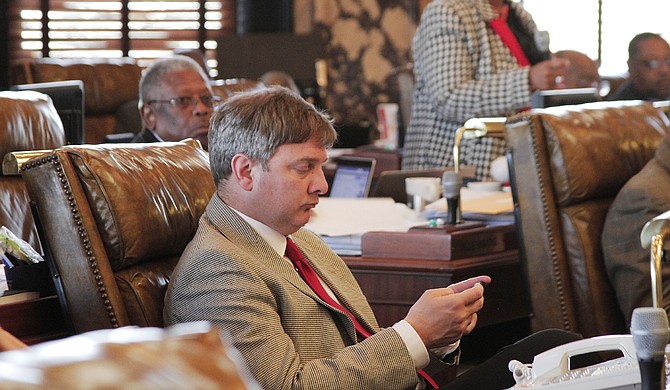 Sen. Joey Fillingane, R-Sumrall, authored the Taxpayer Pay Raise Act of 2016, which cuts three separate taxes over 15 years. The bill passed the Senate March 10 but was held on a motion to reconsider. Photo by Arielle Dreher.

JACKSON — Taxpayers could get a pay raise if the Taxpayer Pay Raise Act of 2016 becomes law, but after two hours of debate today, several senators asked, “At what cost?”

The bill, authored by Sen. Joey Fillingane, R-Sumrall, would phase in tax cuts for the 3 and 4 percent income-tax brackets (the two lowest), the corporate franchise tax and small business and self-employment taxes. Over a period of 15 years, with no growth accounted for, the state’s general fund would lose $575 million from the cut. In its first year, the bill would divert $18 million away from the state’s general fund. 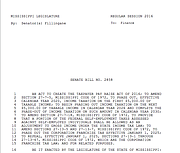 “This is an option we have, and this will give our taxpayers a pay raise—especially the franchise-tax piece of this makes Mississippi more competitive, not less competitive,” he said.

Senate Democrats disagreed, questioning the chairman of the Senate Finance Committee and speaking on the bill separately. Using Mississippi Department of Revenue data, Sen. David Blount, D-Jackson, spoke against the bill, expressing frustration that senators received no numerical data about the effects of the tax cuts. Sen. Blount handed out Department of Revenue number estimates to senators that showed the cost of each phase-out tax cut.

When the state economy’s growth is estimated at 3 percent annually, the bill would divert $896 million away from the state’s general fund, Blount said. He and other Senate Democrats decried the proposed tax cuts, especially when public education and the Mississippi Department of Human Services are in need of full funding or additional funding.

“If you vote for this, what you need to say to community colleges and social workers and everybody else who needs a pay raise is that I chose not to vote to help you,” Blount told the Senate.

Fillingane disagreed, saying that the state can and has increased funding for education and other state agencies while cutting taxes.

“We can prioritize spending; we’ve increased education funding while at the same time cutting taxes and not growing the size of government,” he said.

The suggested income tax cuts would affect about 44 percent of the population, or 600,000 taxpayers, Sen. Gray Tollison, R-Oxford, said while questioning Sen. Blount, and pointed out that the bill would affect a large portion of the state’s population.

Blount agreed but said that the bill actually benefits those who make more money. He said that a family making $30,000 annually would receive $163 a year from the tax cut, but those with higher incomes would receive more money back.

“I don’t think this is being done fairly,” Blount said. “The more you make; the more you benefit.”

Sen. Hob Bryan, D-Amory, also spoke against the bill’s affects on state agencies and the one study, conducted by Mississippi State’s College of Business, which the bill is based on.

Lt. Gov. Tate Reeves supports the bill. In a press release from his office, he said that eliminating the franchise tax alone would have grown the state’s GDP by $282 million and added 3,514 jobs within 10 years, according to a Mississippi State University study.

Sen. Bryan decried the idea that one study could be the basis for the multi-tax cut plan and presented an unsuccessful amendment that would have held the National Strategic Planning & Analysis Research Center and Mississippi State College of Business and Industry, which conducted the study, responsible for the effect that the bill would have by allowing deductions from their budget if the revenue effect is lower than their study determined.

“This plan moves Mississippi toward a flatter, fairer tax policy that allows individuals to keep more of their hard-earned dollars at home to spend and invest,” Lt. Gov. Reeves said in a statement. “As a conservative Republican, I believe Mississippi can reduce the size of government and direct funds to priorities like public schools and infrastructure while putting more money back into taxpayers’ pockets.”

The bill passed by a vote of 38-10 but was held on a motion to reconsider by Sen. Blount.

Email state reporter Arielle Dreher at [email protected] and follow her at @arielle_amara for breaking updates.