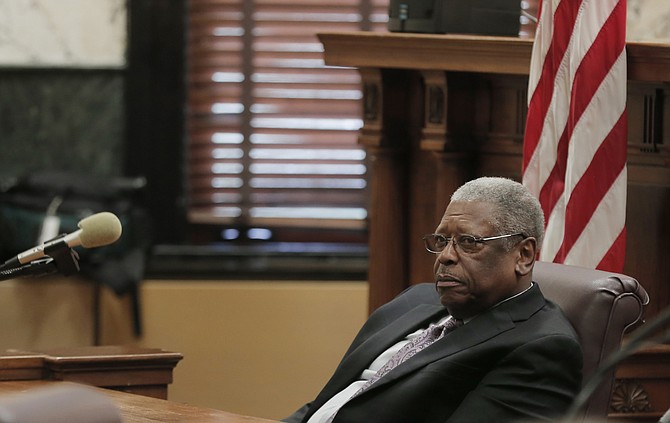 Sen. Willie Simmons, D-Cleveland, told reporters that federal officials were closing over 100 bridges in Mississippi that were previously posted as unsafe. Photo by Imani Khayyam.

JACKSON — UPDATE: This story has been updated with a response from FHA, which indicates that they inspected over 100 bridges and found that 72 should be closed partially or fully as result of federal inspections.

"Over 100 (posted) bridges have been closed." The Mississippi Senate did not take up any legislation today, but before it adjourned, Sen. Willie Simmons, D-Cleveland, stood up to give that announcement.

Federal Highway Administration officials have inspected over 100 bridges around the state this week that were "posted," meaning unable to hold the weight they were designed to hold initially, or unsafe to travel over, Simmons told reporters.

The bridges are all locally owned, meaning they are not on state highways. Simmons said federal officials coming into Mississippi to inspect and close bridges could impede future funding.

"If we don't take care of those bridges, it could affect our (federal) funding," he told reporters.

The Federal Highway Administration confirmed that they have worked with the Mississippi Office of State Aid Road Construction, the Mississippi Department of Transportation and local county engineers to re-inspect and verify the safety of 114 bridges in Mississippi rated in critical condition.

"As a result, all parties participating in the inspections agreed it was necessary to immediately repair, partly or – in some cases – fully close 72 of the critical-condition bridges to ensure the safety of the traveling public," a statement from FHA to the Jackson Free Press said.

Some lawmakers are trying to address the state's many infrastructure needs this session.

A bill that proposed collection of online sales tax from retailers not located in the state in order to divert those funds to infrastructure died when it arrived in the Senate, after Lt. Gov. Tate Reeves declared it "unconstitutional."

House Speaker Philip Gunn, R-Clinton, supports another plan to get additional funds to the state's infrastructure, which he announced Wednesday at a Mississippi Economic Council press conference. The House passed House Bill 1732 on Feb. 21, which would issue a $50-million bond to create the "2017 Municipalities and Counties Bridge Improvements Fund" to help fund bridge repairs around the state.

The Senate has not assigned the bill to a committee, but bond bills are on a different deadline schedule than general bills.

MEC commissioned a 2015 study finding that Mississippi has about 2,300 state and local bridges that are restricted from carrying the legal weight limit they were originally built to hold. That same report said an infrastructure improvement plan would also create 7,000 jobs annually.

Email state reporter Arielle Dreher at [email protected] and follow her for breaking news at @arielle_amara on Twitter.