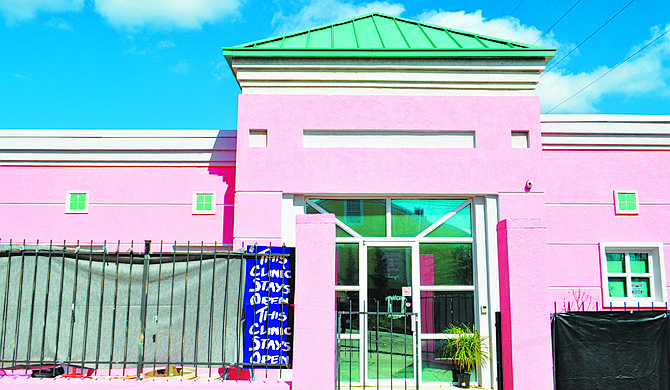 No matter what happens with the U.S. Supreme Court and the effort to close the Jackson Women’s Health Organization (pictured), groups like Planned Parenthood, whose Hattiesburg clinic does not perform abortions, plan to defend women’s access to not only abortion but every kind of reproductive care from contraception to STD and cancer screening. It’s not an easy fight in Mississippi, though. Trip Burns/File Photo

"I will work to make Mississippi the safest state in America for unborn children."

The chilling promise of the state's highest-ranking official, Gov. Phil Bryant, during his inauguration for another term rang loud and clear over the capitol steps in early January. The question, of course, is what more can Mississippi do—legally—to regulate or eliminate abortion practices in the state?

The Roe v. Wade Supreme Court decision, now 43 years old, not only made abortion legal but also made it a woman's right. The U.S. Supreme Court has not yet picked up the state's appeal of the Jackson Women's Health Organization's admitting-privileges lawsuit. The 5th U.S. Circuit Court of Appeals agreed with the clinic that closing JWHO, the only abortion provider left in the state, would infringe on a woman's right to a safe and legal abortion—guaranteed in the Roe v. Wade decision—because it would remove accessibility.

Regardless of the state's appeal of the JWHO case, the fight for reproductive health in Mississippi will continue in the Mississippi Legislature, as organizations including Planned Parenthood plan to defend women's access to not only abortion but every kind of reproductive care from contraception to STD and cancer screening. "Safe, legal abortion must remain available to women in this state," Felicia Brown-Williams, director of public policy for Planned Parenthood Southeast said.

Brown-Williams said her organization is usually on defense in legislative battles in Mississippi. Planned Parenthood only operates one clinic in the state—which does not offer abortion as a service. Instead, the Hattiesburg health clinic provides reproductive health services from cancer screenings to contraceptives.

"We spend a lot of time in the (legislative) session making sure ... services remain safe and legal," Brown-Williams said. "Not having an abortion clinic and not having access to abortion services within our state borders is unacceptable."

Planned Parenthood does not just advocate for abortion rights at the capitol, though. Brown-Williams said the organization is pushing for legislation to expand all reproductive health care access for women including maternity care and pregnancy services.

On Jan. 20, the Mississippi Department of Health announced it is closing nine of its county health department clinics due to "a very limited number of people using their services." In a press release, the department said it will cease to enroll any new maternity patients because those patients have options under the Affordable Care Act and Medicaid Managed Care.

If a woman does not have access to the Planned Parenthood clinic in Hattiesburg or the Jackson Women's Health Organization (which is expanding its reproductive-health options for women), a health department office has been a common choice. Women will call Planned Parenthood asking for services, Brown-Williams said, because the waiting lists for reproductive-health appointments at county health departments are weeks long.

"People think it's really easy to access birth control, but it's not as easy as you might think."

Meeke Addison believes that life begins at inception. A spokeswoman for the conservative American Family Association and talk-show host of one of AFA's radio shows, Addison says that Planned Parenthood purposely targeted "black and brown neighborhoods" in the placement of clinics around the U.S.

Echoing a popular argument among people who oppose both abortion and Planned Parenthood, Addison said that more than 70 percent of Planned Parenthood clinics are set up in minority neighborhoods. She bases that assertion on a study by a group called Life Dynamics—published on the site lifenews.com—on the topic.

"I think that when you say 'Black Lives Matter,' that all black lives have to matter," Addison said.

However, a Guttmacher Institute study that used the same 2010 Census data found that six in 10 abortion providers were located in neighborhoods that were majority white.

The Washington Post also analyzed the Life Dynamics study, concluding that only 110 of almost 800 Planned Parenthood locations are in areas where the African American population exceeds 25 percent of the overall population.

Mississippi has the highest percentage of African American residents in the country, but Addison said the Tupelo-based American Family Association, which supported the failed Personhood amendment in Mississippi, is not currently planning to push for any new legislation in the 2016 Mississippi legislative session.

Marcela Howell, executive director of In Her Own Voice, is on the other side of the "targeting" meme and believes that abortion opponents are wrong to co-opt a serious movement—Black Lives Matter—that highlights police brutality against black men and women, and the lack of indictments that often results.

Her organization fights for black women to have access to reproductive health care throughout the country (targeting the South), both literally and financially.

In Her Own Voice submitted an amicus brief to the U.S. Supreme Court in Whole Women's Health v. Cole—which the court did take up and will hear arguments for in March—discussing the impact on women if the court rules against the Texas women's health clinic.

"The Supreme Court gave every woman a right to abortion—what we're saying is low-income women, predominantly black women, don't have the right to access that," she said.

Howell said the cost of abortions is often too high for women who already have families and children they have to care for; she said she's heard of women selling some of their things to afford an abortion because they ultimately cannot afford or do not want another child.

In 2016, Howell is watching for more Hyde-like amendments, riders often attached to health-care legislation in Congress to bar using federal funds to pay for abortion unless the pregnancy arises from incest, rape or to save the life of the mother.

Ultimately, Howell said, it's about a woman's right to make her own decision.