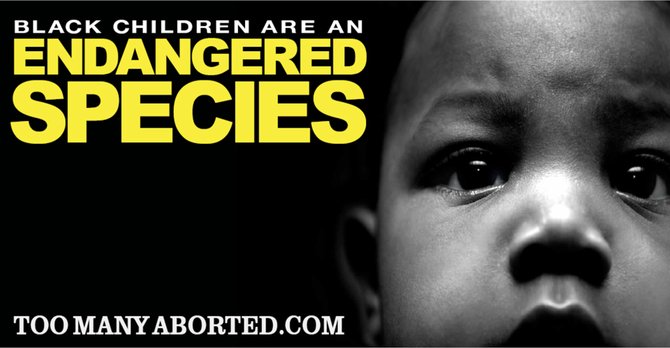 Groups such as the Ashburn, Va.-based Radiance Foundation have used ads such as this to cast abortion as akin to genocide of African American children. Others are crying foul play.

"#Abortion is the KKK's dream come true. It kills more blacks in 3 days than the KKK did ever. #ProLife #tcot"

Nick Bell, SFL president and a junior majoring in communication, said in an interview that the club is not a political group and does not advocate for Personhood.

Bell, who is white and handles the club's Twitter account, said referencing the KKK is a way to target and bring awareness to the history of Planned Parenthood, which he says wincludes ties to eugenics and race purification.

Eugenics was a movement popular with both conservatives and progressives in the early 20th century: More than 65,000 supposedly "feeble-minded" men and mostly women, of a variety of races, underwent forced sterilization in mental institutions (then called "insane asylums") across the country to keep them from reproducing and supposedly corrupting the gene pool. That included hundreds of victims in Mississippi, including at the Mississippi State Hospital at Whitfield, just outside Jackson, and the Ellisville State School (then called the Mississippi School and Colony for the Feebleminded) in nearby Jones County.

Margaret Sanger, birth-control pioneer and founder of Planned Parenthood, was at a Ku Klux Klan ally, Bell said. He insists that Sanger believed the purpose of birth control and abortion was "to eradicate the black race and the unfit in society." Sanger did, in fact, speak to a group of KKK women in 1926 as documented in her autobiography. She spoke to many groups of women about contraception during her lifetime.

While eugenics was viewed as less controversial than birth control, Sanger sought to make contraceptives available to all women, especially those who could not afford them. A primary difference between eugenics and abortion was that eugenics did not allow the victims freedom to choose whether to have a child, and abortion does allow that choice. Planned Parenthood has promoted the principle that women should have the right to make their reproductive choices since its inception.

Laurie Bertram Roberts, Mississippi state president of the National Organization of Women and a columnist for the Jackson Free Press, said the historical context of Sanger's involvement in eugenics is important in understanding her goals.

"First of all, Margaret Sanger did not work on abortion. She worked on birth control. Context is everything. I will never deny that Margaret Sanger was connected to the eugenics movement," Roberts said. "What they (abortion opponents) never bothered to say is that eugenicists also wanted to limit the birth rate of poor white people and disabled people. It wasn't just black people; it was a whole lot of people they deemed to be unfit."

The Washington Post reported that these claims that Sanger wanted to abolish black communities have no basis in fact, and while some of her writings were "inartfully written," many of her words have been taken out of context by members of the anti-abortion movement.

In a letter  written in 1939 to gather support from black ministers, Sanger wrote, "We do not want word to go out that we want to exterminate the Negro population, and the minister is the man who can straighten out that idea if it ever occurs to any of their more rebellious members."

Bell said that because white supremacy and racism are no longer acceptable in everyday society, eugenics "is no longer the front of what (Planned Parenthood) claim(s)."

Roberts points out that even churches, some of which present-day anti-abortion advocates attend, supported eugenicsc during this time. "It's a nasty fact of our history," Roberts said. "I'm not saying that's OK, but when you don't put that in context, it makes it seem like it's this big, scary scheme that she came up with all by herself, but she didn't."

Bell also said he believes Planned Parenthood has strategically placed facilities in minority neighborhoods to increase abortion in those communities.

Stephen Middleton, a professor and director of African American studies at Mississippi State, doesn't buy the claims of Bell and others, including former presidential candidate Herman Cain and Personhood Mississippi advocates, that Planned Parenthood is trying to kill off black people.

"I don't think any institution or Planned Parenthood has targeted African American women to encourage them to have abortions. It just strikes me as nonsense, actually," Middleton said.

Dr. Freda Bush, an African American doctor at East Lakeland Ob-Gyn in Flowood, said the history of Planned Parenthood proves its motives. "If you look at the origin of Planned Parenthood, it was started by Margaret Sanger who was a eugenicist. So, say no more," Bush said.

Bush said that about 80 percent of Planned Parenthood abortion facilities are within walking distance of black and Hispanic neighborhoods.

She said that if you question Planned Parenthood about targeting African Americans, "they'd deny it, and they would give you rational reasons as to why the abortion clinics are located in those communities and why they are providing this service."

"(But) the effect, or the result of the damage to the African American community, is the same," Bush said.

Bell pushes that argument by citing Census data distributed by Life Dynamics that lists the percentage of the population that is made up of African Americans in each zip code in which a Planned Parenthood is located. The Washington Post, however, reported after analyzing the data, "We count only about 110 locations (out of about 800) where the black population exceeds 25 percent of the overall population."

To further support his claim, Bell referenced "sting operations" conducted by the anti-abortion advocacy group Live Action in which a man posing as a donor called Planned Parenthoods across the nation offering donations "to abort (black) kids." During the phone calls, the man offered racist remarks and asked that his donation be used specifically on abortions within black communities. The Planned Parenthood workers accepted the donations, anyway.

The Huffington Post has reported that Live Action hoaxes are heavily edited to distort their meaning.

Bell said that because of the racism he believes Planned Parenthood was founded upon and its rumored connection to eugenics, it has "accomplished what the KKK wanted to accomplish."

"They take abortions for specific races," Bell said. "There have been countless situations like that where they've done race-based abortions, and it's logical it stems from the original founding point."

Middleton said that activists should be careful when using statistics, considering the number of abortions that may not be reported, which includes abortions in private doctor's offices by women who can afford them. Abortions, he pointed out, were performed even before the procedure was legalized.

"One can't ignore class. Even if you were to factor in the number of individuals who might obtain an abortion off the books, the numbers might say something else," Middleton said.

Paul Finkelman, the Justice Pike Hall junior visiting law professor at Paul M. Hebert Law Center at Louisiana State University, said the freedom of choice is the opposite of the KKK, which raped black women and murdered their husbands, sons, brother, uncles and cousins.

"They're attempting to illicit a response. They'll do anything to plant a piece of doubt in a woman's mind," Colon said.

On the contrary, Bush said that by using language that supports abortion and assumes unplanned pregnancies are unwanted, abortion clinics provide a landscape that hurts and manipulates women. She said the use of words like "choice," "freedom" and "rights" put abortion in a positive light.

"But life is not a choice. Once the child is conceived, that child also has rights to life. It is not the woman's body any longer. It is a child growing inside her body."

Bell said Students for Life also compares abortion to "genocide," using the logic that abortion is the systematic killing of humans of a particular age group. SFL references the holocaust for a similar statement in a tweet posted March 16: "@MSU_SFL: You are witnessing a holocaust five times greater than Hitler's."

"Their reasoning seems flawed," Middleton of MSU's African American Studies said about the tweet comparing the forced deportation and murder of Jews to women choosing whether or not to have a child.

Bell goes as far as to compare a Planned Parenthood location to a Nazi concentration camp on his personal Twitter feed. "@Chaosman92: Drove past this place in San Diego. like driving past a Nazi Concentration Camp," Bell tweeted March 10 alongside an attached photo of the California reproductive-care facility. He justified his tweet by saying that the abortions that occur at any Planned Parenthood remind him of the death toll of the Holocaust.

Roberts, who is African American, said "Abortion Is Black Genocide" is a common phrase written on signs held by protesters at JWHO, where she is a clinic escort.

She said that while the clinic sees a rotation of about 30 to 40 regular protesters, only about two or three are black.

"That's what's so insidious about all of this: that it's not coming from black people. It's not coming from the black community," Roberts said. "They (white abortion opponents) took a message of concern that honestly did come from the Black Power Movement of the '60s and '70s (and) that was legit, right? And they skewed that for their own messaging, right?

"Because they missed the analysis that black women in the movement pushed back on that and said, 'No, we fight for this right to have control over our own bodies.'"

Bell said that embryological science proves that the unborn are human, and for that reason there is no distinction between abortion and the killing of an adult human.

"They have just as much right to live as we do," Bell said.

Middleton said as a male he cannot imagine what it would be like to make those reproductive decisions, and if someone disagrees with abortion, it would be better to "talk about it in a way that doesn't target individuals as being murderers."

"That's a pretty charged term to apply to people who, for whatever reason, believe that their best choice in that moment is an abortion," Middleton said.

Using racial messages to make political statements is offensive to people of color in the South, especially because the political agenda doesn't seem to benefit the families the messages target, Colon said.

Bell said he can see the truth in Colon's statement when considering right-wing conservatives, but he doesn't associate himself with a political party or ideology.

"I believe that social welfare, if used correctly, is a great thing," Bell said. "I don't think people should rely on the government for every single need and not do anything for themselves," Bell said.

Roberts said that since Colon talked to The Huffington Post about working at JWHO and "called them (anti-abortion protesters) out for being racist," protesters have backed off from using "black genocide" and other racially driven messages.

"They just kind of were like, 'Oh. Yeah, maybe we'll shut that up," Roberts said.