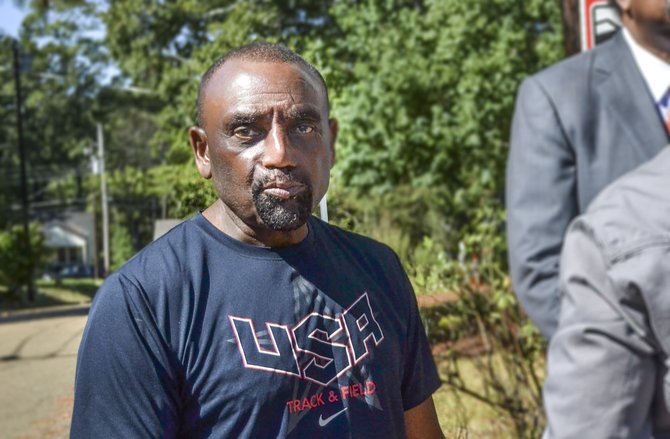 Rev. Jesse Lee Peterson, the founder of the Brotherhood Organizations of a New Destiny and a contributing commentator on Fox News, has made a number of controversial statements over the years, including that black racists and guilty white people are responsible for electing President Barack Obama.

The rate of abortion in the African American community will hasten the downfall of McDonald's, Beyonce and Jay-Z as well as the black press, said several black clergymen who spoke Wednesday at a rally at Mississippi's last abortion clinic.

Among them was the Rev. Jesse Lee Peterson, the founder of the Brotherhood Organizations of a New Destiny and a contributing commentator on Fox News. Peterson, who considers himself a friend of Fox show host Sean Hannity, has made a number of controversial statements over the years, including that black racists and guilty white people are responsible for electing President Barack Obama.

Peterson and other black preachers, who spoke at the invitation of a traveling anti-abortion organization called Operation Save America, characterized women who receive abortions as ignorant and misguided. The group is based in Texas.

Asked later about the remarks, Peterson told the Jackson Free Press that he is not a misogynist, but that "liberal godless women" are destroying the country.

"(T)hese women hate men; they hate the idea of family, of one man one wife; they hate the family structure, so we need to start dealing them because we've allowed them to get away with this since they got the right to vote," he told the JFP.

Feminists "hate men, they hate god ... they hate everything that's good," and they are the same women who support abortion, Peterson continued.

Peterson traveled to Jackson as part of a demonstration against the Jackson Women's Health Organization. At a press conference, four black male preachers said abortion is tantamount to "black genocide," but only one or two black protesters were in attendance.

The rest of the anti-abortion protesters were white and nodded at the preachers' statements. The preachers claimed that some 1,800 black babies are aborted in the U.S. every day, referring the audience back to blackgenocide.org.

This kind of rhetoric—that abortion is black genocide—is common within the anti-abortion movement, which often compares Planned Parenthood and other abortion providers to the KKK. To those against abortion, Planned Parenthood has a bad reputation due to its history, which is tied to Margaret Sanger—a pioneer for eugenics, or forced sterilization.

Pastor James Manning of Harlem used most of his 14 minutes on the pulpit to argue that multinational corporations and brands would soon collapse because of the shrinking population of black customers due to abortion.

This extends to McDonald's Corp., which he said would cease to operate in three to seven years due to their loss in black customers also as a result of abortion. Additionally, married musicians Beyonce Knowles and Shawn "Jay-Z" Carter are seeing lower record sales, he claimed, because there are fewer blacks buying their music.

Additionally, Manning said Essence Magazine is really the only African American-centered magazine left after all other newspapers and magazines that catered to black communities died out after the "demonic order," Roe v. Wade, "was set down from the high court of this land" in 1973.

"Essence is the only one that is left, and it really is perpetrating if you will, or pimping if you will, the ignorance of the women that support abortion," Manning said.

These claims appear to lack merit, however. Jay-Z and Beyonce's "On The Run Tour" has been one the highest-grossing tours in history, and each has consistently smashed music-sales records. Additionally, Ebony and Jet magazines and hundreds of black-oriented publications continue to exist in print and online.

This is just so SAD. Talk about ignorant and misguided and not for the obvious reasons. It is hypocritical of Black preachers to talk about what other people are or arent doing to solve their own problems when they don't have the courage to pool their resources to address the poverty and dire circumstances that cause many young Black mothers to carry out abortions. They are too busy building grand churches and luxuries to themselves Shameful. You certainly don't see them lined up to adopt these children. Further, if you asked them about the historical truths of the bible, they can only quote what they've been taught NOT the truth of their faith. They go right back to the sons of slave masters, FOX news, for approval.

If they really wanted to Change the dynamic, they would set their personal egos aside and embrace their true faith by educating themselves, stop judging, and work together to create a wholesome environment for children to thrive in. Instead, they are over at RACIST FOX NEWS acting as pawns for the ultra right.