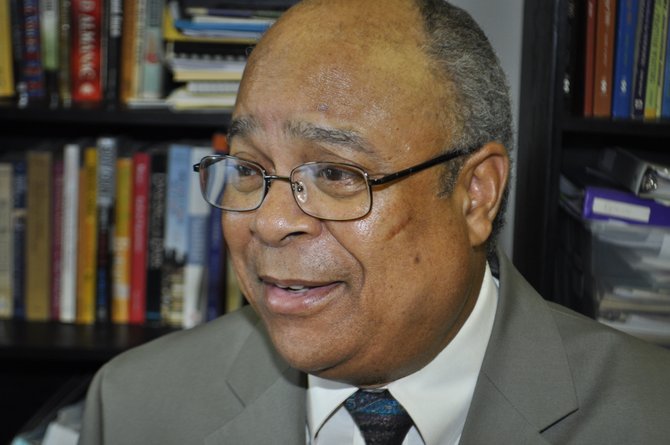 James "Lap" Baker, who recently retired from the Hinds County Public Works Department, wants to put infrastructure improvements back on track as the county's District 4 supervisor. Photo by Trip Burns

Today, some Hinds County residents will begin the process of replacing two seats on the Board of Supervisors. Voters can visit the county's website to determine if they live in either District 2 or District 4 and where they can go cast a ballot.

Why is it important? Here's why:

About a year ago, Hinds County District 5 Supervisor Kenny Stokes famously roared the phrase "yo mama" at an audience member during an open meeting. It made fun fodder for bloggers and news organizations covering the otherwise dry meetings. But among county employees and people who often do business with the state's largest county, "yo-mama-gate" marked a low point for Hinds County's already too-often dysfunctional government.

That's partly why Tuesday, Sept. 24's special primary elections are generating an unusually high level of interest as far as county board of supervisors races go. On Tuesday, voters will take the first step toward neutralizing what can only be described as the silliness that permeates the existing Hinds County board.

In District 2, the county's biggest district in terms of a land area, nine Democrats are vying to replace Supervisor Doug Anderson, who passed away last April. Anderson had been in such poor health prior to his death that he missed numerous meetings—enough meetings to be considered a non-factor on the board.

The field of candidates is solid. There's Alberta Ross Gibson, a savvy businesswoman who sees the success of her insurance agency as a barometer for the bread-and-butter issues facing Joe and Jane Hinds County. Community activist David Archie has a reputation for being brash, but his second-place finish in the 2011 supervisor's race indicates that he has a strong, loyal following. Bo Brown is well known, having served on the Jackson City Council for close to a decade, a third of that time as council president.

Gus McCoy, a newcomer to politics, is young, charismatic and enthusiastic. His experience working with young people would be a tremendous asset in addressing the problem of youth crime, which many of candidates say is the top concern of county residents.

But the challenges facing the board are immense, and residents need someone who is familiar with the nuts and bolts of county government, and who will hit the ground running.

Darrel McQuirter, the county's planning and zoning director, knows how the county works, and he has relationships with the current board members. In fact, McQuirter came within a hair of becoming the interim District 2 supervisor with support from Phil Fisher, who left the District 4 post to become mayor of Clinton, and Peggy Hobson Calhoun of District 3. Although McQuirter's nomination failed for lack of a three-vote majority in June, we believe he deserves the job.

For many of the same reasons, we endorse James "Lap" Baker in the Democratic primary for District 4. Baker, who retired from the county's public works department this year and has experience in urban planning, vowed to ensure that rural Hinds County gets the attention it deserves. It'll be an uphill fight for the Democrat in the deep Republican stronghold of District 4, but Baker's experience and knowledge of the county's ins and outs eclipse other Democratic contenders for the race. He should get a shot at the seat.

Finally, the Jackson Free Press endorses Alvin Woods in the Republican primary for District 4 supervisor. Not only is Woods the only Republican contender who agreed to answer the JFP's questions, we admire his moxie for keeping his business in south Jackson and standing up for what he believes is right. Woods seems to have a level head on his shoulders, something the Hinds County Board of Supervisors could use.

Be sure to check out JFP's interviews with all the candidates who agreed to talk with us so you can make an informed decision. Happy voting.