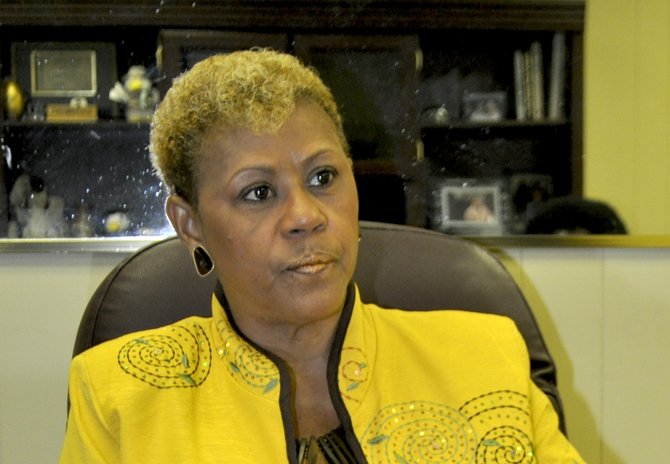 Alberta Ross Gibson is confident she can sell investors and developers on doing business in Hinds County. Photo by Trip Burns

Alberta Ross Gibson, 61, has her ear to the ground when it comes to the economy of Hinds County.

Having worked in insurance sales for three decades, she claims she can tell which way the economy is heading based on the number of policies she writes in a given month. When times are good, she might sell an average of two policies per day (a good rule of thumb is to aim to write one insurance policy per day, she says). When times are hard, agents might write fewer than 30 policies a month.

Right now, times are hard for Gibson's customers, who include contractors and other business people who frequently have to purchase pricey insurance plans before they can bid on a project or start a new venture. Gibson, who is divorced and has one daughter, believes having her finger on the pulse of the problems facing business owners makes her uniquely qualified to "sell" Hinds County to prospective developers.

Gibson has also been the chairwoman of the Farish Street Heritage Festival for the past 13 years. She believes so strongly that she is the right person for the job of District 2 Hinds County supervisor that she called off the festival this year to focus on her candidacy. She recently made her pitch to the Jackson Free Press.

You say your experience as an insurance agent provides unique insight into the county's economic problems. Could you explain?

In the property and casualty line of insurance, I meet small-business owners almost on a daily basis. We have general contractors that are required to carry general-liability insurance, workers comp or both. In a lot of cases, the contractors cannot get the job—in most cases they cannot bid on the job—until they show proof of insurance.

I'm always lenient in trying to work with them to finance their premiums. There are individuals that have been in my office that have said, "I can't get this job without having insurance, and I don't have $1,000 to pay as a down payment." So what I do there is look for other options: Can you pay half of your down payment and set the other half up on an installment?

What are some economic-development projects that you're excited about?

I have a serious concern about downtown. I am the chairperson for the (Farish Street Heritage) festival and have been for the last 13 years. That event has contributed to the tax base of Hinds County. I call it my baby because I love Farish Street. We bring the community out. We coordinate with the colleges and bring vendors. The vendors make money, and we collect taxes from the vendors. That's one of the reasons I'm interested in making some other things work on Farish Street. I have some things in mind, but I'm not ready to give everyone my plan.

Would this replace the festival this year?

No, (it's) something to add. We did not do the festival this year because of my priority of running for the District 2 supervisor seat. I could not produce the festival because the festival takes a good six months out of the year for me to solicit funds, make preparations—it consists of a lot.

What are your thoughts on the proposed Byram-Clinton Parkway?

I want to make sure, with Jackson being the capital city, that Jackson will be included. In order for Jackson to reap some benefits, it must be inclusive.

Do you see serving District 2 as being in a tug of war of priorities between the city and rural parts of the district?

It doesn't have to be because it's going to take a collaborative effort on the part of urban supervisors as well as rural and urban areas. As a board, we have to make sure that we are unified and put ourselves on the back burner.

What's the biggest issue facing the board right now, from your perspective?

Right now, I would say budget and public safety is number one. We want to make sure that the Hinds County Sheriff's Office is adequately funded so we can be proactive instead of reactive. If you're talking to me about investing in Hinds County, I want to know what your crime stats are. So if we can work with law enforcement to get a handle on our crime, that's going to give the board negotiating room to talk to investors.

What do people need to know about you? Give me the one-minute pitch.

I'm a Democrat. Even more importantly, I'm a child of the living God Jesus Christ, and I still believe in moral values.