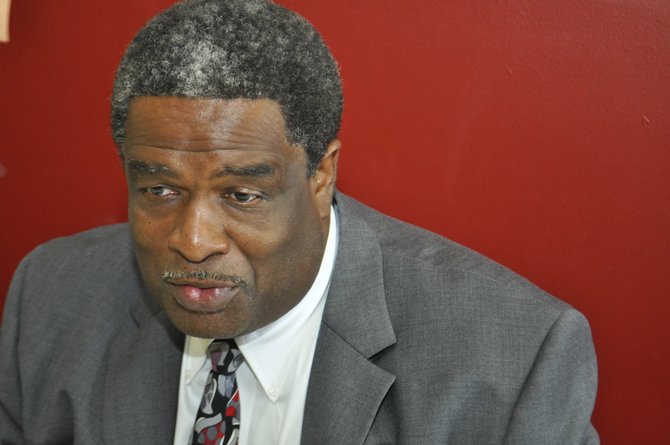 Darrel McQuirter, a Hinds County department head who took a leave of absence to run for the District 2 supervisor's seat, is putting on his job on the line because he believes he can help the county run better. Photo by Trip Burns

Darrel McQuirter, 51, has a way of describing his job as the city of Clinton's fire chief from 1998 to 2005: mission impossible. In moments of crises, the fire department had a seemingly blank check to squelch whatever emergency arose, but in times of relative calm, the bean counters at city hall pressed the department to cut costs.

In McQuirter's next mission—to be the next Hinds County supervisor for District 2—he hopes to use his experience managing tight budgets as a former emergency-operations manager and as the current director of the county's planning and zoning department (he took a leave of absence to run for office).

McQuirter and his wife, Janice, have six children and two granddaughters. He spoke with the Jackson Free Press about making Hinds County a better place for his "grandbabies."

What are people saying is top priority for the district?

One of the biggest concerns is crime. ... It is one of the most highly publicized things that you will see on TV, and it creates a feeling of insecurity sometimes. Whether you've been hit directly by a criminal element or just seeing it, (crime) makes you cautious.

The other item that comes up is the lack of new business, the deterioration of business, lack of maintenance on the roads (and) grass cutting. I hear a lot of complaints from small towns in getting assistance in the rural areas. Quite a few feel that they have been abandoned and/or neglected.

Recently the board has shifted some money between funds. Would you have supported that?

The biggest problem Hinds County has right now is that we have a diminishing tax base and an increased cost of doing business, and something has to give. Either you have to find a way to reverse your diminishing tax base or you've got to cut your expenses. The only way you're going to change your tax base is bring in more business and homes, or raise your taxes. If you don't create an environment for people to want to move to Hinds County, if you don't create an environment for businesses to want to relocate to Hinds County, then your tax base will stay the same or diminish.

Where are the growth opportunities?

Hinds County is unique. It's in the center of the state. It's at the crossroads between New Orleans and Memphis. It's between Dallas and Atlanta, and we're not taking advantage of (traffic). It comes through here, but it doesn't stop. We need to figure out a way to get things to stop here. It is also the seat of state government. I'm a supporter of the lake project to create some type of destination downtown.

What has Hinds County done so that the next development comes here? I'm not upset with Madison or Rankin County about what they're doing; I'm upset because Hinds County is not doing enough to put itself in a position so that those developments can come in and create growth for Hinds County.

Has the board missed opportunities?

Hinds County has failed to fertilize the soil. No company with 50 employees or $500 million is interested in investing someplace where they feel the chances of it working are not very good.

We can get on TV, radio and everything else and shout and say, "I'm going to bring this business here." Those are just wishful dreams. Businessmen are not going to risk money on something that's going to fail

You have an emergency-operations background. The Airwaves (emergency-communications-systems vendor) contract is a common point of friction, and we're now on our third emergency-operations-center director in about a year. What needs to happen to make that work better than it is now?

Do we need a bigger jail?

Yes, but we don't have the money to pay for a bigger jail. Even if you do, when you don't deal with (systemic social issues), you're going to have to build a bigger jail. It's not going to stop; it will continue to be an ongoing cycle. Some of the laws have become so strict on simple offenses that you have so many people locked up for a long time for some minor stuff. ...

Right now, we have an overloaded prison and jail system. We have an undermanned jail and sheriff's department, but the courts and sheriff's department eats up over half of the budget. So even if they need more money, where are you going to get it? So, deteriorating conditions (of the jail), deteriorating revenue and more expenses—inmate medical expenses are eating the budget up.

It is not my intention to dictate to the sheriff how he should run his department. It is my intention to work with not only this (Hinds County) sheriff but also the other sheriffs in the community and come up with some regional solutions. I don't know all of his plans, but I'm willing to listen to any good plan.