Tannehill: ‘You Deserve to Feel Safe’ 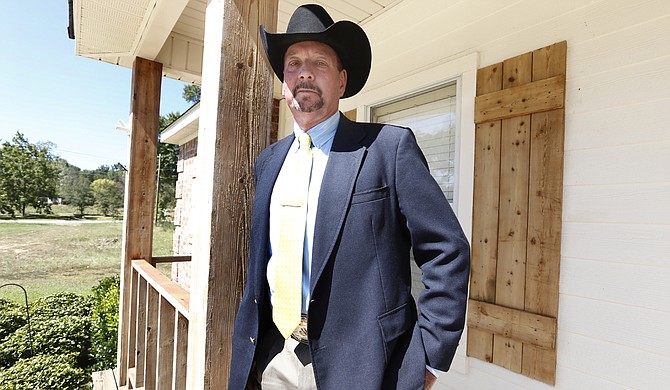 Les Tannehill, 59, said he is running as an independent for Hinds County sheriff because he didn’t see “a competent leader” among the list of candidates for the post. In November, he faces off against Victor Mason, who defeated incumbent Tyrone Lewis in the Democratic primary, fellow independent Reginald Thompson and Charlette Stewart Oswalt, a Republican who had no primary opponent. Photo by Imani Khayyam.

"I always knew coming up that I would either be a veterinarian, because of my love for animals, or a law-enforcement officer," said Les Tannehill, an independent candidate for Hinds County sheriff.

Eventually, Tannehill, 59, would combine those passions, sort of. A Terry native, Tannehill joined the Jackson Police Department in 1978 and worked there until 1991 when he became a Hinds County sheriff's deputy, which included a stint in the mounted patrol.

During that time, he lobbied his boss, then-Sheriff Malcolm McMillin, to allow mounted deputies to wear 10-gallon cowboy hats instead of the more shallow—and, therefore, less comfortable, in Tannehill's view—ranger hat that deputies wear today. Nevertheless, over the past 30 years, Tannehill thinks he developed a head for law enforcement that makes him eminently qualified to serve as the county's top lawman.

Tannehill, a private investigator and newlywed to wife of 16 months, Renee, recently talked to the Jackson Free Press about why he should be the new sheriff in town.

I don't guess the strategies of how you attack (crime) really changed that much. You've just got to have the desire to get out and solve these crimes. That's why I put in so many hours of my own time. Crime basically remains the same, (but) you get different technology to fight the crime. The bottom line—when it comes down to it—is good common street sense to be able to figure it out. No investigator has a piece of equipment or a crystal ball that's going to tell him how to solve a crime or who's committing the crime. Human intel is your best source and to get that, it means having a good relationship with the public.

Has crime itself changed?

Tell me about your proposed mentoring program.

What I've envisioned happening is (a) 18- to 20-week boot camp. During this time, we'd have to work with Hinds (Community College) to get them a GED if they don't have one. We've got people on board who I've been meeting with and talking to—people like master electricians—who come in and teach a trade and try to cooperate with businesses to come in and get through this 18- to 20-week program. (Participants will) be on probation and, once they complete that probation successfully, then they'll be able to get that felony removed from their record.

How would you identify the participants?

First of all, no violent crimes. We certainly want the victims on board with it. We want this guy to pay back any restitution. If they had prior crimes, they wouldn't be eligible. We need to try to turn the ones we can around. You won't ever be able to save everybody. I think sometimes people need second chances. I think that's why a lot of people join gangs—to have their esteem built up and be a part of something. We've got to come in and take the place of the gangs to say, 'You are worth something. You're a human being.'

How would you split resources between the city of Jackson and the county?

The sheriff's main patrols should be out in the county. Jackson has a full-functioning police department, and it's not really advantageous for the sheriff's department to take away from protection and wellness of the county. I've worked with just about all the federal task forces. I have good working relationships with other sheriffs. The way to attack crime in the city is you get all those (agencies) to pony up a man up a man or two. Everybody in Hinds County has a vested interest in what goes on. We're the home of the capital city. You put together a task force of 20 to 25 men and you start going after these warrants that are on file already and start chasing these guys until they're in jail or in another country. You don't take resources from the county and put them in the city because then people in the county suffer.

What are your thoughts on the jail situation?

It's a mess, let's face it. The thing, structurally, has been a disaster since it was built. Right now, you have a lot of issues going on, but without being in there, it's hard to know. After reading the Justice (Department) report, you've got some humanitarian problems. You've got some staffing problems. I think the key to this thing is that you've got to hire the proper staffing. When you hire people just to fill a position, then you're just increasing the problem you've already got. Then, you're going to have to properly train them then you're going to have to make sure they're properly versed on policy and procedure. Then you need to have good, seasoned supervisors to make sure his subordinates are carrying out policy and procedures.

Would you prefer a new jail, or do you think Raymond is workable?

Would I love to be able to have a new jail to walk into? Of course. Is that going to happen? Not likely. I think the building and structure can be made to where it's suitable until some changes are made. I'm not going in and asking for a luxurious jail. I'll ask for the basic things. Anybody, I don't care where you are in Hinds County, even if you're an inmate in jail, you deserve to feel safe and not like your life is going to be taken. People who live around the jail should feel safe that (prisoners are) not going to be walking out of the doors and coming out of the roof.

A lot of people think that a white sheriff candidate couldn't win majority-black Hinds County. How would you convince people you'd represent everyone?

I believe in Hinds County. I believe in the city of Jackson. I don't care about color. Most of these programs I want to set up will benefit the African American community more than anybody just because of the demographics. A black man looks at it just like the white man: We want our families to be safe. We want our kids to be safe at school and home and wherever they're at. I think people are so tired of crime—whites, blacks, everybody. They want a change; they want a difference. So I'm not running this race like I'm a white man. I'm running like I'm a man running for Hinds County.