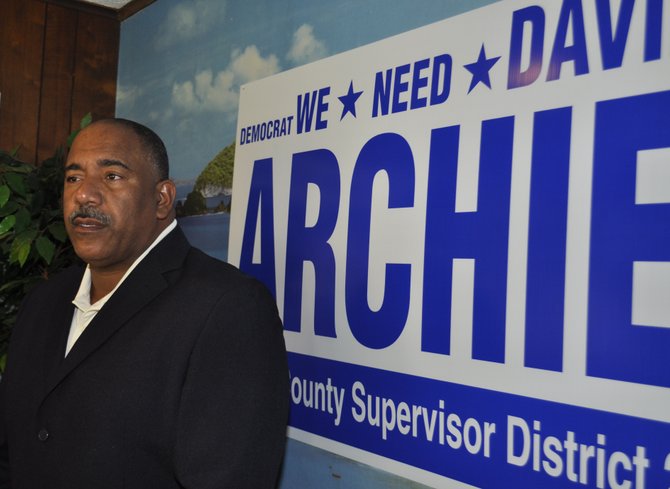 After coming up a bit short in the last countywide election, David Archie is hoping the people of District 2 give him a supervisor's job in the upcoming special election. Photo by Trip Burns

David Archie came pretty close to winning a seat on the Hinds County Board of Supervisors in 2011. That year, Archie finished second in the Democratic runoff for the District 2 seat, then held by board veteran Doug Anderson. Archie faced Anderson in a runoff, collecting 46 percent of the vote in that election. Now, he's giving it another go in the special election to fill the District 2 seat after Anderson's death earlier this year.

Archie, 49, spoke with the Jackson Free Press about why he should finish in first place this time around.

Hinds County's District 2 is large and diverse, with both rural and inner-city areas. How do you balance the needs of people in both?

Every community needs something different. Let's take, for instance, Edwards. They need a bank. I've already spoken to a couple of banks outside of Mississippi about maybe coming to Mississippi and relocating in Edwards.

Smaller banks—not real big banks. I think people have a tendency to build better relationships with smaller banks. ... The other thing that is needed in Edwards is a nice grocery store where people can shop—maybe not as big and nice as a Kroger but maybe a Save a Lot or McDade's.

They don't have a washeteria in the whole entire town and there are many young folks there that can't (afford to) buy washers and dryers ... But I think the number one concern in Edwards is the water. It's my understanding that the water is brown. I've seen the brown water. The water-treatment center needs to be replaced; the tower probably needs to be replaced. The water is so brown that some people are afraid to take baths in the water.

I've spoken with citizens, and I've told them that I would go out of my way to engage with the state legislators, and even go out and ask for federal dollars to make this happen.

Now let's move over to the town of Utica. This is a town that people have simply forgotten about. One of their main problems is that they don't have any place to shop. This is a town that we believe has been overlooked in the last five to 10 years. There are no new structures that are going up. ...

Now let's move down to Bolton. It's an area that could be a very nice area, but you don't have any shopping areas. I propose that we find a way to create a frontage road between Bolton and Edwards, where there can be two towns in Hinds County with stores where they can shop.

Obviously, the people in the district who live in the city have different needs than those in the rural areas. What are their needs?

Roads. There are monies that we can take where we are able to repave roads—not waiting on the city to get it done but using your county tax dollars to get it done. The road right in front of us, Mayes Street—let me show you what I'm talking about: You have two businesses here on Mayes Street, in the midst of the 'hood. You have a cattle company and a brick company. A big truck just drove by trying to get to the brick company, and they are paying great taxes in the city. But, right in front of their business, the road is so absolutely pathetic it's unbelievable.

Doesn't that have to do with the large trucks that are constantly going back and forth?

No. They haven't been paved in 20 years. Everything is going to wear out. Let's give (businesses) a reason to stay where we can continue to receive their tax dollars. Let's take care of the people that are already here.

The other things I hear people talk about is that we have some things to do but we don't have nice areas where we can eat, drink and shop within and around the community itself. ...

The Bel-Air subdivision—the people don't see a great increase in the value of their property. There's something wrong with that. We've got to motivate ourselves to change the environment that is around the community so we can get their property values up.

What's your assessment of the situation at Raymond Detention Center?

We need a 48- to 72-hour holding facility that is in Jackson where people are able to go to jail and bond out in Jackson, and not use all this tax money to transport them from one place to the next. They take them to jail in Jackson, then take them down (to Raymond) and book them in. It just doesn't make any sense.

They can book them (in Jackson) and give them three days to get their bond and get out of jail here, so you don't use manpower, you don't use gas going up and down the road. If you're booked in on a DUI or (for) not paying a fine, why should you have to go all the way to Raymond to go to jail?