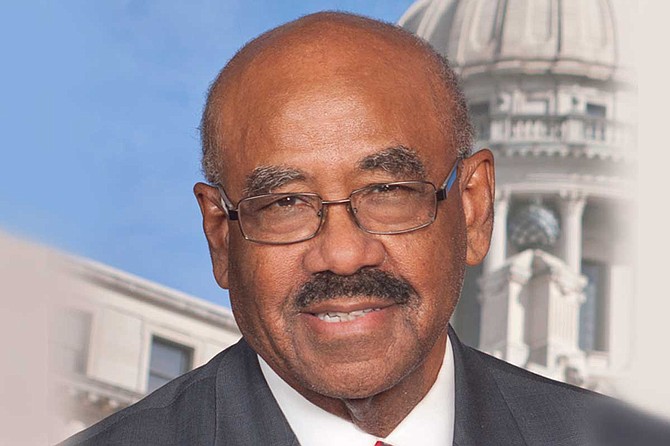 Hinds County Board of Supervisors Vice President Credell Calhoun, a former legislator, said something needs to be done to get the formerly incarcerated back to work. Photo courtesy Mississippi House of Representatives

The Hinds County Board of Supervisors on Monday committed $50,000 for what it calls Second Chance Reentry Program for the formerly incarcerated.

Board Vice President and District 3 Supervisor Credell Calhoun invited his special-projects officer, Louis Armstrong, to address the board on the need to stand up an arrangement for reintroducing former prisoners into the community and reduce recidivism, which he says is generally high.

Armstrong is a former Jackson city council member who served over a year in federal prison, after pleading guilty to taking $25,000 bribe to influence a council vote on rezoning a strip club in 1999.

Laying out the statistics, Armstrong said that while about 240 people per year go from Jackson to Mississippi Department of Corrections facilities, about 560 are released into the city every year, largely in south Jackson.

"Want to know why crimes are high in south Jackson? It is because that is where they are back to. The latest report from MDOC indicates they are coming back to three census tracts in south Jackson," he said. "80% of (crimes are by those) out there (who) have already served time. They come back to Jackson; They feel like Jackson has more resources, housing opportunities, jobs, support services than any other place. They think they can get a job, (but) employers don't want to give them a job. These are the people that need the second chance."

Armstrong said the City of Jackson had indicated an interest in the program, which it used to run. Harvey Johnson Jr., the first African American mayor of the city elected first in 1997, started the program.

He added that $50,000 is not going to be enough seed funding to start the program. "If we can get another $50,000 from the City of Jackson, then we have a chance to really start the program and become eligible for (the U.S.) Department of Justice's funding so we can begin to really serve these individuals who are coming home."

"I have spoken with the City, they are going to come up with another $50,000, and we are asking the board for $50,000 to initiate the program," Calhoun said. "We have to do something to get (these) people back into the workforce."

Calhoun then raised the motion for the board to support the program with $50,000. The motion passed with three votes and no dissension. District 5 Supervisor Bobby McGowan did not attend the meeting, and District 4 Supervisor Vern O. Gavin abstained.

Louis Armstrong, a special-projects officer for Supervisor Calhoun, notified the board on Monday that the grant is for those who earn well below the median income for Hinds County.

"The Federal Home Loans Bank makes funds available for grants to homeowners to make repairs to their homes," Armstrong said. "The program allowed for homeowners whose income is 80% or less than the area median income for Hinds County for a family of two."

He said the county’s proposed grant application will include the names of the 10 intending beneficiaries from each of the five districts and would require each supervisor to hold a public hearing to identify them. The county will make the grant application in partnership with a nonprofit, Mississippi Housing Partnership, which will administer it.

"We will be asking that each supervisor conduct a public hearing in your district, invite homeowners to come and then identify (those) who will qualify for the program for the first year," Armstrong said. "Mississippi Housing Partnership will work with those homeowners to get those grants to them so that they may make those repairs to their homes. Usually, it's going to be a roof, electrical works in older homes in and around the city of Jackson and Hinds County."

Making arrests is not enough to stem persistent gunshots in many neighborhoods in Hinds County, Sheriff Lee Vance told the board of supervisors on Monday. He suggested upgrading the law against unlawful discharge from a misdemeanor to a felony to act as a better deterrent and having landlords take more responsibility to vet renters.

District 2 Supervisor David Archie said that residents of the Queens neighborhood had threatened to leave the city if their numerous complaints of different issues affecting their quality of life remain the same. They made the comments at a July 14 neighborhood meeting with Vance in attendance.

"We had a discussion at that meeting and after the meeting, Sheriff Vance and his deputies went to work immediately in the community where the citizens for so long (had) cried out for help, hearing gun fires all night long, and can't get any help," Archie said. "We don't need to let it get out of hand. They've already been some driveby shootings and some folks dying in the communities because of that."

"I have been aware of the problems in the Queens community for quite a long time. I was 30 years in the Jackson Police Department. Queens have been a battleground," Sheriff Vance told the board on Monday. "When I was in JPD, I sent a legislative request (and I know this is a very difficult issue this time) to make firing weapons inside the city limits of Jackson a felony. I don't think it got out of the committee in the Legislature. But when we start talking about trying to make neighborhoods safer, we need to pass some laws that support that notion."

Vance believes those who fire guns in the city indiscriminately do not think there is any serious repercussion for doing so.

"They fire weapons where I live. It's not just the Queens. It's just like people believe that there is nothing to firing these high-caliber weapons inside the city of Jackson," he said, expressing the willingness to resubmit the bill making it a felony.

While saying enforcing the law is not enough, Vance advised that landlords should also take more responsibility to vet tenants. "We did that when I was the (JPD) precinct commander in Precinct 2, and that was pretty effective," he added.

Vance said many people possess firearms illegally: "We have a state where accessibility of firearms is pretty easy and discharging them inside the city of Jackson (attracts) minimal consequences."

"In (the) Byram area, they shoot all the time," Board Vice President and District 3 Supervisor Calhoun said.

Archie said the citizens of the affected communities elect officials to make them safe and mulled a summit to bring them together to solve the insecurity problem.

"We are not going to continue to allow people to terrorize our communities in this city, and just simply take the communities over, with zero respect for the elderly," he said. "It is simply time for us to use our time and authority, not to disrespect, not to ‘police profile,’ but actually to do our job in working together to help clean these communities that are crying out for help. That is our responsibility."

District 2 Supervisor David L. Archie will represent Hinds County at the memorial service for John Lewis, the civil-rights icon and decades-long member of the House of Representative, who died on Friday, age 80.

"John Lewis and other freedom riders and civil-rights workers (visited) Jackson, Mississippi on different occasions," Archie said at Monday's meeting. "I will ask this board to allow me to go to the memorial service that is going to take place in Atlanta, probably this week, or perhaps the beginning of next week."

The board granted the request.

"On CNN the other night, I saw a picture of John Lewis in Jackson, Mississippi, where he was arrested and spent (37) days in our penitentiary here because of the protest he was part of in Mississippi. I think it is fair that the capital county goes to (show) support," he said.

Freedom Riders were interracial civil-rights activists. In 1961 and later years, they rode interstate buses into the segregated states in the south of the United States to protest the non-enforcement of the Supreme Court rulings declaring segregated public buses unconstitutional.