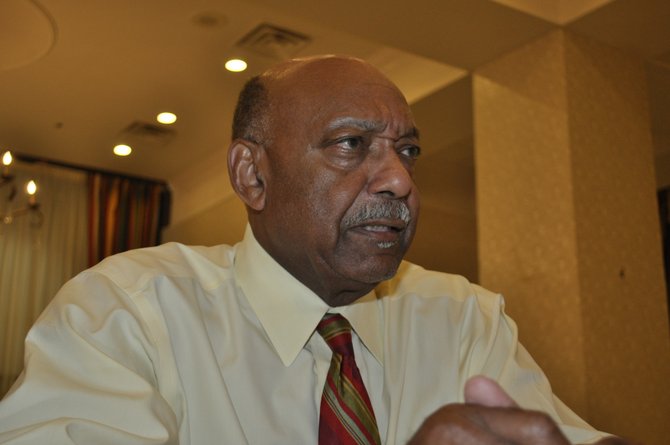 Former Jackson Councilman Bo Brown wants to be a unifier on the often-divided Hinds County Board of Supervisors as District 2's representative. Photo by Trip Burns

W.R. "Bo" Brown names his two terms on the Jackson City Council, from 1997 to 2005, as among his chief qualifications to serve as a Hinds County supervisor. During his tenure on the Jackson City Council, where he served as president three times, Brown was involved with crafting the city's $300 million budget and regularly worked with many of the same people he would serve alongside on the county board. A Jackson native who resides in the Bel Air neighborhood, Brown recently spoke with the Jackson Free Press about his candidacy.

How do you balance the needs of the inner city and rural residents of the district?

The county and city have perhaps one thing in common and that's roads and streets. And I've found that to be something that's very common between the two constituencies. ...

One of the biggest problems we have in Jackson is the streets—along with the infrastructure, water and sewer—and (in) rural areas, one of the primary concerns would be the roads. I've ridden down through that area, and there are some bad roads—like in Champion Hill and Chapel Hill.

Should the county be paving roads in the city of Jackson?

They have in the past. Yes, it's been a longtime practice. It wouldn't be anything new. ... We're seeing it more recently now than we did at one time. In fact, they have markers around the city showing that.

Where do you see the main economic-development opportunities in the district?

From the county's perspective, I see a void in new housing construction and neighborhood development and, certainly, we can try to attract more businesses to provide an economic boost. As far as the city of Jackson is concerned, you could say the same thing: Businesses are leaving, and we need to attract more businesses. We need to expand the tax base with more housing startups. And transportation infrastructure—you know, the Byram-Clinton parkway, great project. Where you have good roads and good streets, people are going to come—both housing and business.

Does it concern you that the parkway would not go through the city of Jackson?

Well, certainly the county would benefit, and that would be part of my responsibility. I don't think it's going to cost the city very much to develop that parkway. It's essentially a county project.

Recently, there was a move to divert money away from the parkway project. Were you opposed to that?

I really don't know whether or not I would be opposed to that because I don't know what particular projects that money is being diverted to. I would certainly support development of that parkway. Every parkway in this metropolitan area has attracted business and development.

Highland Colony (Parkway is) the most recent example (and) parkways in Rankin County. If we develop it, we're going to see developments develop around transportation arteries such as a parkway.

What can the board do to fix problems at the jail?

All the supervisors need to be on the same page. We need to support the sheriff and not fight the sheriff, in terms of him doing his job, and provide the necessary resources to fix the jail.

I also propose, if I'm elected, to bring the jail up to the standard so that we can attract federal dollars as a result of housing federal prisoners. We could make a lot of money from that.

You mean housing federal prisoners in the county facility?

Yes, just like Madison County does now. Probably half the inmates in that jail are federal prisoners.

What you're saying is that the board should defer to the sheriff on running the jail?

By all means, but, of course, the sheriff is not responsible with coming up with the resources to bring the jail up to proper standards. That's the job of the board.

How can the board do a better job? The sheriff says that he can't order a lightbulb without going through the county administrator's office.

It seems like to me that there is some disagreement between the county administrator and, on occasion, the board and the sheriff. As I said before, we all need to be on the same page with respect to that. The county board of supervisors oversees the county manager.

There's been a lot of turnover among department directors. What's your take on that?

Those offices serve at the will and pleasure of the board of supervisors, so from my perspective on the outside looking in, there's got to be some political jockeying—personalities and things like that. It goes back to those five members of the board of supervisors sticking together for the overall benefit of the county. That's difficult to do when you have five individuals with so much power, and everybody is guarding their turf.

You have some very strong-willed personalities on the board. Do you think that you can build consensus and relationships with those members?

I served with Supervisor (Kenneth) Stokes for two terms on the Jackson City Council including serving as president.

(Supervisor) Robert Graham served as a communications officer under my watch (as city council president), so there was a relationship there when he was with the Jackson Police Department. And of course, I've worked closely with Peggy Calhoun during my tenure as a councilman on various projects that the city and county undertook.

There's some friction between those three. Who do you align yourself with?

When I first read the title of this article, I was anxious to know how "BO" Brown could possible "align" himself with the "right". when I hear the term "Right" in the context of political articles, I think in terms of the "right" as the conservative wing (Republican) and "left" - the liberal/progressive arm of the Democratic Party.

There wasn't anything in this article that supports the political assignment of party ideology. Bo Brown was an excellent member of the City Council and was able to settle the Council after becoming president. He was able to short-circuit some of the foolishness that was common place before his election to that post.

Bo Brown is a man of character and also a man with a good heart. I have known him to be fair in his dealings with others and also a hard and dedicated worker.

There are many people in this race. I think that the last count was 19. It is my hope that Brown will make it through to VICTORY!

Justjess, the title is not "Brown: Aligning with THE Right" as in right-wing ideology. Read it again. It is "Brown: Aligning With Right," as in his final quote: "I'm going to align myself with right and what's best for the people of Hinds County."