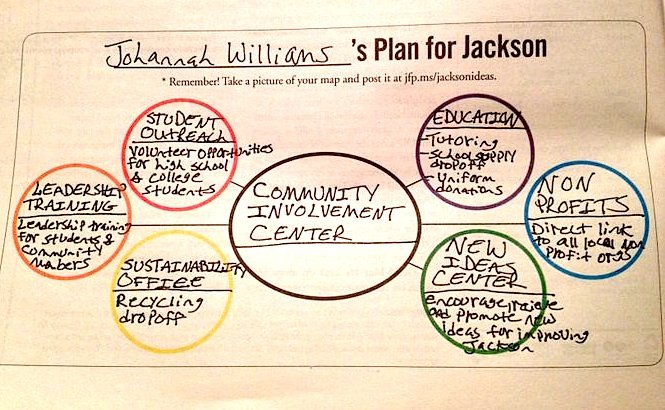 Malkie Schwartz Highlighting good ideas is one GOOD Idea that I see Jackson benefiting from! 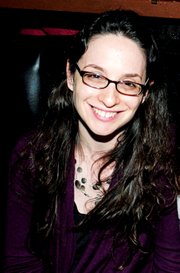 Create a training ground/school exclusively for non-profit professionals, people committed to change and emerging leaders who are interested in building careers in the non-profit sector

Create more leadership opportunities for high school and college students. Global Kids (globalkids.org) is an organization in NYC that engages young people in addressing global issues. An initiative like Global Kids will demonstrate that Jackson is one of many cities and communities around the world addressing similar issues.

Faith Doster Stauss First, we need to reduce crime. Neighborhood watch used to be a program that really brought the community together to fight crime. Never hear about it anymore.

Jackson does not have a movie theater, (but) I hear there will be one coming soon. An IMAX theater would be what every large city has.

Downtown has to be renovated and must prosper. The project downtown has failed.

Scott M. Crawford Agree with Tom Head, but add that we need a "WHATEVER IT TAKES" attitude toward fixing Jackson's problems. If that means raising taxes in an equitable way, so be it. We need to expand JATRAN to become a metro transit system, before the price of gasoline and climate change reach crisis proportions. Finally, we need to comply with the Americans with Disabilities Act. Disability will affect the vast majority of us. Accessible rights of way (streets/sidewalks/crosswalks/bike lanes) that welcome all their users.

Ashlee Theodore Something like "Bright Lights, Belhaven Nights" every weekend.

Robert Van Zandt Lower taxes, across the board. Boom!

Julie Skipper I'd love to see Jackson implement a workable, reliable system of public transportation. When you think about the fact that we're a capitol city without one, it's really tragic—especially with so many students, workers, residents and visitors. It's something that I think citizens would use if it's developed in a smart way.

Younger generations, in particular, look at things like this when choosing a city in which to live. Plus, with low-emission and electric or hybrid buses, it can become a factor in sustainable development.

I'd love to see something involving partnerships with the surrounding cities to develop a regional plan, with routes mapped to effectively maximize funding sources and use. A public-private collaboration could be used to operate vehicles for supplemental routes (e.g., downtown) to the larger municipal routes.

A comprehensive, reliable system—where people can simply know they'll be able to get from Point A to Point B on a schedule—is something we can do, smartly and creatively, and would be really big for Jackson to accomplish and be proud of.

Trip Burns My idea for Jackson would be a good, steady and reliable bus system. Not only to do buses carry people, but they can carry bikes on the front—encouraging not just commuters, but bike riders as well.

I lived in Clearwater, Fla., for a brief period and used only buses and my bike. It's a smaller city than Jackson, yet close enough to Tampa and St. Petersburg that it had a very good system. You could set your watch by it, and it was affordable, too. Clearwater is interesting because it's a city composed primarily of Scientologists, and its world headquarters are there, and the church owns most of the property. It was a "city that could be bought." It's also close to the water. What's interesting is that there is a high concentration of Scientology students and what you might call "missionaries."

My point is that a system like that was useful for many people: scientologists, tourists, and everyday workers.

Jackson has hospitals, schools and residences spread over a good portion of land. The challenge would be to make public transportation attractive and useful. If you can rely on it, you can use it.

A valid criticism would be, "Well, that's great, but there's no where to go." So maybe an expansion wouldn't be good right now, but what would be good is for our bus system to be reliable. Provide an option for people who do not drive, can't drive, or just want to hop on a bus.

Brett Hennington I would like to second the Trolley/Streetcar idea, which would hopefully mirror the Maps 3 project currently underway in OKC. (See jfp.ms/OKCtrolley)

JFP Note: The Street Car sub-committee of Vision 2022 is exploring funding opportunities for a feasibility study. The next step is to build the working group to include stakeholders/businesses in the area. A feasibility study will be commissioned to evaluate the economic impact a streetcar system can have on the city of Jackson and evaluate and identify transit corridors and transportation opportunities.

All, we want to see your seven best ideas for Jackson! Just fill out the idea mid map on page 14 of this GOOD Ideas issue (on the streets now), then post it in the comments below here (or email it to me at [email protected], and I'll post it for you). We'll pick the most innovative three maps to publish in a future issue of either the JFP or BOOM Jackson. And we'll give those three folks $25 gift cards to a local restaurant.

Let's have fun and help the city at the same time!

My idea for Jackson is a Community Involvement Center. The center would include: Student Outreach (providing volunteer opportunities for high school and college student groups), Community Leadership Training (providing leadership training for high school and college students, as well as community members), An Office of Sustainability (containing a recycling drop off location), an Education Department (offering tutoring and containing a school supply and school uniform donation drop-off center), a Non-Profits Department (providing a direct link to all local non-profit organizations and information on how to volunteer with these organizations or support them financially), and a New Ideas Center (which will encourage and support new ideas for improving the city of Jackson; and broadcast/promote those ideas while encouraging local/state support of these ideas).

https://jacksonfreepress.media.client...">My idea for Jackson is a Community Involvement Center. by johannahwilliams

Residents of Jackson need a strong "Shop Jackson Campaign". I don't think that our citizens are fully aware of the loss of tax revenue on a daily basis and the impact the loss has on operational funds.

If more people would shop in Jackson, there would be adequate funds to manage this city.

If this one "NEED" is done, my other six will be a piece of cake!

Jackson needs a bigger entertainment venue, perhaps maybe an outdoor amphitheater. The events they used to hold in front of One Jackson Place were a blast to attend!

Jackson needs grocery stores and other essentials for its downtown residents in order to entice more professionals to take up residency.

Jackson needs to focus on one major project, and just get it done! The focus is constantly shifted from Farish St., to Two Lake, to Town Creek, etc. Problem is, nothing EVER gets done.

Jackson needs term limits for its city council positions! No explantion should be required.

I like the ideas for improved transit. For that to work though, Jackson needs to make itself more transit friendly with denser, walkable development. This was called for in the city's comprehensive plan long ago, but those plans were shelved by the Melton administration.

I like the idea for a trolley on Capitol Street. The idea of trolleys running westward from downtown, just like they do here in Philly has a certain emotional resonance with me. Speaking of Philly's Green Line trolleys, they connect the city's downtown with two large universities, U Penn and Drexel. I think it might be a good idea to connect a Jackson trolley system with college campuses too, because young hip college students without cars are a big ridership base. A line connecting downtown with Jackson State would be a good idea. Even without a trolley, better transit between downtown and happening areas like Jackson State's campus, Belhaven, and Fondren is a must.

Completely agree with you, Mark. I'm thinking for starters that a trolley or streetcar running a Capitol/Amite line and a Capitol/Pascagoula line would be good. And I like the idea of extending it to Jackson's colleges and universities.

We need a first-class school system. I'm not sure of everything that has to be done to get there (although I DO have ideas!), but I do know that every person who works for JPS needs to put that at the top of their priorities or find a new job elsewhere. So says this JPS employee. I'm ready for EVERY JPS employee (not just teacherd) to be evaluated and given a pat on the back, an improvement plan, or walking papers.

Assuming the EH Ferrell water plant at the I-55 waterworks curve is eventually decommissioned, that property would make a great site for a city park of some sort. Imagine a city park (aka Riverside Park) with an amphitheater overlooking Pearl River, along with a kayak/canoe whitewater course which would be built where the low head dam is situated now. (Google dallas trinity river whitewater park for example). This could also be the central hub of a larger bike trail system for the metro area (Museum to market place trail already started). It’s centrally located, next to two popular museums, and would highlight our most underused amenity, the Pearl River.

Until adequate public education and/or alternative education options are available in Jackson proper, middle class families that can't afford the private schools but can afford to invest in their children's education other ways (where they choose to live) will continue to flee to the suburbs to provide better options for their kids' education.

And with this continuing tax base erosion (have we hit the bottom yet? I'm not sure), no matter what project, ordinance, twitter account or trolley is put together, Jackson will continue to be behind the 8 ball.

Fixing public schools is a serious challenge for cities across the country, and Jackson is no different. I'm not sure that challenge can be tackled separately from fixing problems of poverty and economic segregation, because concentrated poverty is so damaging to schools in so many ways. Concentrated poverty leads to low tax bases and chronic underfunding. It also leads to crippling discipline problems. In turn, this leads the most involved parents understandably moving their kids to magnet or private schools, further weakening the neighborhood schools. Education is in many ways a key to fighting poverty, but in a chicken-and-egg sort of dilemma I'm not sure how to provide good educations to all without first licking poverty.

Received from MIchael Reed via email:

To whom it may concerns:

Hello. I do not live in Jackson, but in Chicago IL. Nevertheless, I would like to see that Jackson MS have more places and entertainment areas such as supermarkets, movie theaters, and museums with national and international exhibits in many areas, i.e. science and history. Also, I like to see that the Jackson Zoo be improved with more species and naturalistic habitats for the animals.

You should visit my home city Chicago, IL someday.

Have fun and faith in God.

There actually is a movie theater in Jackson though it doesn't show pictures. Remember the Alamo.