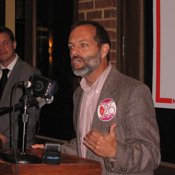 Les Riley, who proposed Initiative 26, said that despite the initiative's defeat, he will continue fighting for legal rights for unborn children, just as abolitionists worked to end slavery.

See also Grassroots Mamas: 'We Did It!'

Supporters of Initiative 26 were unprepared for defeat Tuesday evening, as a group of about a hundred gathered at AJ's on the Lake in Ridgeland after the polls closed for a "watch and pray" event. Children played in a nearby fountain while teens and adults watched election results flash on the bottom of an oversized TV projection.

As WLBT announced the initiative had been defeated, stunned onlookers sat in silence for several moments before a few spoke to contradict the results, saying it was still too early to be sure.

Voters defeated the initiative, 58 to 42 percent.

"We have talked about regulations, we've elected candidates, we've talked about the Supreme Court for 38 years, but we have not answered the fundamental question," said Les Riley, who proposed the initiative. "We began, here in Mississippi what our friends in Colorado began a couple of years ago--we began to answer that question."

Leaders of the push to pass the amendment reluctantly conceded defeat at about 10 p.m., already discussing what next steps they could take to put the amendment on the ballot again in a future election.

Now that voters have rejected the Personhood Amendment, proponents cannot put the same initiative, or one that is substantially the same, on the ballot for at least two years. In two years, Mississippians will vote on municipal offices. The next statewide election is not until 2015.

Personhood USA's leaders have vowed to take similar initiatives to other states, but the measure's defeat in the most conservative state in the nation does not bode well for its success elsewhere.

Of the 82 counties in the state, the Personhood Initiative received a majority of the vote in only 19 counties. Results from Alcorn and Wilkinson counties were not available at the time of writing. In Hinds County, the Associated Press reports that 76 percent voted against the initiative. Opponents of 26 also won the other two counties in the tri-county area, with 69 percent in Madison County and 57 percent in Rankin County voting against the measure.

The loss was not entirely unexpected, as polling released just a day before the election indicated the race was too close to call. Still, the fact that the race was even close in a state with such strong support for the pro-life movement was a surprise to many both for and against the initiative.

In the weeks leading up to the election, opponents of Initiative 26 directed their message to people who typically voted against abortion, arguing that "you can still be pro-life and against Initiative 26," and saying the measure went far past banning abortion and encroached on women's rights to birth control and in vitro fertilization.

Personhood supporters blamed the defeat on "lies by Planned Parenthood," which they said pumped out-of-state money into the race.

Personhood had its fair share of out-of-state support as well. Several representatives of the national organization Personhood USA were at the event yesterday evening. Personhood USA has supported similar initiatives in other states, though none of them have passed, and is trying to get Personhood Amendments on the ballot for future elections in other states for the 2012 election.

A youth group from Mercy Seat Christian Church in Milwaukee that had been in the area since Saturday supporting the campaign was also at the event. Jason Storms, the youth pastor at the church, placed part of the blame for the initiative's defeat on people who are against abortion, but did not vote for the measure.

"They peacefully coexist with what they believe is the murdering of human beings in the womb," he said. "That's a problem. You can't have it both ways."

Storms is frustrated by the slow, limited progress by sectors of the pro-life movement that favor an incremental approach of chipping away at abortion rights. He said personhood cuts to the fundamental question of when people should begin to receive legal protection.

A religious fervor illuminated much of the dialogue at the Yes on 26 event, as supporters of the initiative aligned themselves with the abolitionist movement and people fighting Hitler's Holocaust. Personhood supporters who see abortion as a fundamental denial of human rights view a far-reaching amendment to end abortion in all circumstances as just the thing this country needs.

Though some religious leaders opposed the initiative, many have been vocal in their support of the proposed amendment. The Mississippi Baptist Convention's Christian Action Commission released a statement saying they "mourn with heaven" over the initiative's defeat, and asking, "how much longer will God stand for this unprecedented atrocity in Mississippi and the United States?"

Despite Personhood's defeat, initiatives requiring voter identification and limiting eminent domain both passed, marking the first time Mississippians have passed a ballot initiative. Only two other initiatives have made it to a vote in this state. Both proposed term limits for legislators, and both were narrowly defeated.

Supporters of three proposed initiatives are currently collecting signatures in hopes of getting their agendas on the ballot in the 2012 election: One to prohibit any law compelling any person or employer to participate in a health care plan; one to require people, contractors or employees receiving public funds to pass drug tests and be citizens or legal residents; and one to make Colonel Reb the official mascot of the University of Mississippi.

First, let me address "lies by Planned Parenthood" : Planned Parenthood got into the whole debate quite a bit AFTER me and a few Facebook groups got going. I am NOT affiliated with Planned Parenthood and I unmasked a LOT of lies coming out of the "yes" camp. If deceit and subterfuge is the only way they can get people to vote for the atrocity they are pushing, then it is only right to shed the light of Truth on their foulness. Second, saying life begins BEFORE a woman becomes pregnant is absolute stupidity. Fertilization happens up to two weeks before only about 10 to 20% of fertilized eggs actually make it to the Uterus and implant. Third, "A religious fervor illuminated much of the dialogue" - should really be "A religious fever" because these people really pushing "two-cells floating in a fallopian tube have as much or more rights than the woman they are inside" are sick. Lastly, Pro-Life should mean that you support and care for the people who are already Living, Breathing people - not "The Unborn" (sounds like a great horror movie title!). ... and lastly lastly... Where are the progressive ballot initiatives??