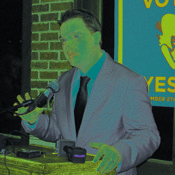 Religious fervor illuminated much of the dialogue at a Yes on 26 event just moments after voters refused to pass a constitutional amendment to declare that people with legal rights exist at the moment of fertilization. Supporters of the initiative aligned themselves with the abolitionist movement and people fighting genocide akin to the Jewish Holocaust. They took a long-term view of their defeat.

Mississippi voters rejected Initiative 26, to amend the state's constitution to define personhood as beginning at the moment of fertilization, by a wide margin. Now that this latest effort has failed, some within the anti-abortion movement are gearing up to re-introduce the initiative, while others are rethinking their strategy.

After supporters of the initiative conceded the election, Keith Mason, president of the national organization Personhood USA, which is based in Colorado, said he was disappointed with the vote, but will continue working for what he called a human-rights battle.

"(The vote is) a realization that this is a long-term fight, that it's not a quick fix," he said. "Abortion has been around, and they've been killing children for nearly 40 years, so I don't know that we could expect one vote, one initiative to take care of it. In a way, we expected it."

While Personhood USA plans to place the same constitutional amendment on the ballot in other states, its loss in Mississippi speaks to whispers within the anti-abortion movement that such an amendment might not be the best strategy for ending abortion.

Some in the anti-abortion movement favor a slow, incremental effort to put limits on abortion, such as instituting parental consent laws and waiting periods, and bans on "partial-birth" abortions, a term the National Right to Life Committee coined in 1995.

Others, including Personhood USA, look for legislation and test cases that directly challenge Roe v. Wade. While personhood supporters are looking for a Supreme Court ruling to overturn Roe, others fear that such a direct challenge could lead the court to cement or even expand abortion rights, perhaps even overturning hard-won victories at the state level.

Not 'One Size Fits All'
On the other hand, some in the pro-life movement say that amending the state constitution to affirm fetal personhood could not end abortion in Mississippi, anyway.

Kristi Hamrick, spokeswoman for the anti-abortion law and policy organization Americans United for Life, said the initiative had symbolic appeal for a lot of people, but her organization does not believe a personhood amendment to the state constitution would have changed current abortion laws. Amending the constitution would only have prohibited the state government from doing abortions, Hamrick said, which they already do not do.

Mississippi already grants a degree of personhood to fetuses, Hamrick said, through a fetal homicide law, which allows people to be prosecuted for attacking a pregnant woman and causing a miscarriage, among other things.

Many different anti-abortion activists and organizations are looking for the proper test case to overturn Roe, Hamrick said; her organization simply didn't feel that Initiative 26 would change anything.

"This is not a one-size-fits-all movement," she said. "... The Personhood people felt like this had merit, and certainly, of course, they were welcome to try that."

Movement Pride
At a Ridgeland election-night event to watch for results, Personhood supporters expressed frustration that Mississippi--generally known for its conservative, anti-abortion voting record--voted down the initiative. Still, the high-profile initiative put abortion back on the agenda in a way that the state hasn't seen in recent years.

Terri Herring, national director for the Madison-based Pro Life America Network, thanked supporters at the event for their work on the campaign.

"The pro-life movement has come together like I have not seen in 25 years, and that is because people were passionate instead of apathetic," she said. "We saw the churches do a lot, and I am proud of the pro-life movement tonight for the battle that has been fought."

Herring said that while the loss is a setback, she is encouraged that 42 percent of voters supported the initiative. In the future, she said personhood proponents will have to answer concerns about birth control and in-vitro fertilization.

"Those are the concerns that have to be answered for this to move forward," she said. "This is the interesting thing--nobody talked about abortion, nobody tried to justify abortion. ... It seems the greatest concern was in the development within the first five days after fertilization."

Les Riley, who proposed the initiative, also said the campaign had affected the state by raising awareness of abortion and persuading some women not to have abortions.

"We have talked about regulations, we've elected candidates, we've talked about the Supreme Court for 38 years, but we have not answered the fundamental question," Riley said at the event. "We began, here in Mississippi, what our friends in Colorado began a couple of years ago--we began to answer that question."

'When Life Begins'
Strategy aside, the question of "when life begins" has the potential to divide even committed anti-abortion advocates. The anti-abortion movement has typically argued that life--with all its certain inalienable rights--begins at conception, without actually defining when conception occurs. Some say conception should be defined as fertilization, when the sperm and egg join to form a zygote before implanting in the uterus. Others say conception occurs when the fertilized egg implants in the uterine wall.

A few days before the initiative went to a vote, Gov. Haley Barbour voiced concerns that the initiative's definition was too narrow. "I believe life begins at conception," he said on NBC. "Unfortunately, this Personhood Amendment doesn't say that. It says life begins at fertilization or cloning or the functional equivalent thereof."

Then Personhood supporters rushed to correct Barbour. "I want to make it simple," Dr. Shani Mack said at a press conference after Barbour's TV appearance. "Conception is to fertilization as the Republican Party is to the GOP."

Barbour said later that he voted for the initiative, saying: "I believe life begins at conception. So I think the right thing to do was vote for it," according to an Associated Press report.

Initiative 26 forced a narrow definition of conception that most Mississippi voters were unwilling to accept.

Hamrick said part of the reason AUL did not support Initiative 26 is because of how confusing constitutional amendments are. The confusion over how exactly the amendment would change existing law left it vulnerable to attack from opponents.

"It's not simple to understand. It's not easy to explain," Hamrick said. "It gets down to legal contentions and expectations."

Although Personhood USA leaders say they will continue to work to get language similar to that of Initiative 26 on other state ballots, some anti-abortion activists and legislators may revise its language in future legislation to define when certain inalienable rights begin.

The Associated Press reported after the election that Alabama state Sen. Phil Williams of Rainbow City, Ala., has prepared legislation to put a constitutional amendment to voters that is similar to Mississippi's, with one key difference: The legislation would say "persons" in Alabama include "any human being from fertilization and implantation in the womb."

A law defining the beginning of personhood at implantation, rather than fertilization, could address concerns about its impact on in-vitro fertilization and hormonal birth control that can prevent a fertilized egg from implanting. Alabama lawmakers will consider the senator's revised definition of personhood during the 2012 legislative session.

Mississippi might not be finished with the personhood debate, either.

After the vote, supporters said they planned to begin the initiative process again to put the proposed amendment before voters in a future election.

Isn't it interesting that these "Vaginal Patrolmen/women" haven't any connection to babies already born into poverty, illness, rape, incest and other cruel and inhumane circumstances ? This same group is pushing Congress to cut social/entitlement programsto include planned parent-hood programs. Their focus is on the undeveloped/unborn; however, they seem quite confortable watching children die of some of the above stated causes.

The fight for reproductive rights is far from over; it's just moved to another front, in this case, Alabama. Defining 'personhood' as being at implantation removes any threat to birth control, which was a major sticking point for many of those who would otherwise have voted Yes. How many times do we have to fight the same battle over women's reproductive rights? Please keep this issue in front of the public! Now that other states will be dealing with this on their own ground, we must stay aware and make our voices heard at the national level as well.