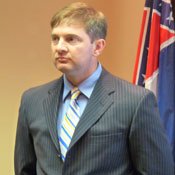 Sen. Joey Fillingane, R-Sumrall, doesn't expect his personhood bill to go anywhere, but the debate over personhood and abortion continues.

Although state Sen. Joey Fillingane, R-Sumrall, says it's unlikely the Mississippi Legislature will take up the debate over personhood this year, efforts by state lawmakers in Mississippi and elsewhere in the country are gaining steam.

Rep. Andy Gipson, R-Braxton, introduced House Concurrent Resolution 61 Monday to put personhood on the ballot again. The resolution defines "person" as applying to "all human beings from conception to natural death," and, if passed, could go before voters on the November ballot.

In response to confusion over whether last fall's failed Initiative 26 would limit access to birth control, in vitro fertilization and abortions to save the mother's life or health, Gipson's resolution says it would not affect contraceptives "or other methods of birth control that do not kill a person," in vitro fertilization, medical treatment for life-threatening physical conditions or miscarriages.

The resolution also specifies that the state could still enforce the death penalty.

It does not, however, define conception beyond saying it is "the earliest stage of development of a human being." Like another personhood resolution introduced last week, Gipson's legislation fails to specify whether "conception" means the point at which an egg is fertilized or when a fertilized egg implants in the uterine wall. Some abortion opponents, including Personhood Colorado, consider birth-control pills to be a form of abortion because they could prevent fertilized eggs from implanting, thus killing a person. The organization says the pill, Plan B and IUD birth control are not true contraceptives because they can prevent the implantation of a fertilized eggs.

"Recognizing personhood has no effect on true contraceptives that only prevent fertilization, including spermicide, natural family planning and condoms," Personhood Colorado's website says.

Gipson's resolution now heads to the House Constitution Committee. He was not immediately available for comment.

Elsewhere in the country, almost identical personhood bills passed the Oklahoma Senate and the Virginia House of Delegates earlier this month. Both laws declare that "the life of each human being begins at conception," and give unborn children the same rights, privileges and immunities available to other people.

The Virginia bill contains a key difference, however. It subjects those rights to the U.S. Constitution "and decisional interpretations thereof by the United States Supreme Court," which would make any new personhood rights unenforceable as long as Roe v. Wade guarantees a woman's right to abortion.

While it defines personhood as beginning at conception, like other personhood measures, the Virginia bill doesn't share in the tactics of Personhood USA or others who want a personhood law that challenges the Supreme Court's interpretation of the Constitution. It sounds like personhood, but unless Roe is overturned, it's essentially a useless, symbolic law.

Fillingane's resolution to put personhood back on Mississippi's ballot suffers from the same roadblock--it, too, "protects the life of every unborn child from conception to birth," but only to the extent the U.S. Constitution permits.

Oklahoma's Personhood Act, however, leaves out deference to federal law. It is more in line with what personhood supporters have been trying to pass through initiatives and referendums for several years. Personhood Mississippi President Les Riley sent out a statement praising the Senate vote.

"Just as the Oklahoma Senate has done, our state will one day offer full legal protection to every person," Riley said in the statement.

The measure passed the Oklahoma Senate 34-8. All the votes against the bill came from Democrats. Riley's statement said they expect the bill to pass the House as well.

One senator who voted against the bill, Sen. Constance Johnson from Oklahoma City, attempted to amend the Personhood Act to require rapists to help pay to raise any offspring that result from rape.

"In the spirit of shared responsibility in issues of reproduction," the amendment reads, "if a woman declares that she is pregnant non-consensually, the sperm donor shall be required to undergo a statutorily mandated vasectomy, shall be fined $25,000 and shall also be financially responsible for the offspring of such pregnancy until the age of 21."

Johnson's proposed amendment did not go to a vote.

Like many other anti-abortion attempts, all three bills declare that human life begins at conception, but fail to specify what "conception" means. This caused problems for anti-abortion advocates last year, when former Gov. Haley Barbour said he was uncertain about the Personhood Initiative because it said life began at fertilization, rather than conception.

Personhood supporters quickly dismissed Barbour's misgivings, insisting that conception and fertilization are the same thing, and Barbour later said he voted for the measure. Others, however, think of conception as when a fertilized egg implants into the uterine wall.

Fillingane has also introduced a bill that would require people performing abortions to determine whether the fetus has a heartbeat. If a fetal heartbeat is detectable, the woman would have to sign a form acknowledging that her fetus does have a heartbeat before getting an abortion. The bill includes a section outlawing abortions if a fetal heartbeat can be detected, but it also provides for sections of the bill to be set aside if they are deemed unconstitutional. The provision would presumably kick in if the Supreme Court overturns Roe v. Wade.

The bill includes exceptions if the woman's life or "a major bodily function" is so endangered that the situation requires a speedy abortion.

Although it does not specifically reference personhood, Fillingane's bill incorporates some ideas personhood supporters advanced last fall, such as the idea that pregnancy begins at fertilization and that fetuses are "unborn human individuals" from fertilization until live birth. Like many personhood measures, the bill does not allow for abortions in the case of rape; it does, however, include an exception for abortions to save the mother's life or to prevent "a serious risk of the substantial and irreversible impairment of a major bodily function."