Advocates Gear up For Personhood Battle 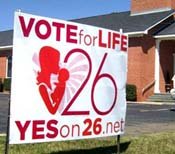 The "Yes on 26" campaign is gaining support from congregations for a ballot initiative that ask voters if the state constitution should define when human life begins.

Anti-abortion advocates celebrated a Mississippi Supreme Court ruling last week that OK'd a Nov. 8 ballot initiative asking voters whether the state Constitution should define when life begins, but the battles over the proposed amendment are far from over.

For more than a year, anti-abortion advocates and the organization Personhood Mississippi worked to obtain more than 130,000 signatures for the measure to be placed on the Nov. 8 ballot. The Personhood ballot measure would amend the Mississippi constitution to redefine "person" or "persons" to "include every human being from the moment of fertilization, cloning or the functional equivalent thereof."

Plaintiffs took their suit to Hinds County Circuit Court last year, where Judge Malcolm Harrison, appointed by Republican Gov. Haley Barbour, punted the issue to the Mississippi Supreme Court by concluding that Personhood Mississippi had collected enough signatures to place the initiative on the ballot.

On Sept. 8, the Mississippi Supreme Court ruled that it does not have the authority to determine the constitutionality of the voter initiative, yet, saying that the initiative wasn't "ripe" for review.   "Ultimately, the judiciary's power is restricted in reviewing the constitutionality of a proposal, regardless of whether that proposal is proffered by a legislator or through a voter initiative. Our law provides that this Court cannot interfere with the legislative act of the people, just as this Court cannot interfere with the attempt of the Legislature to pass a law," the court stated in its Personhood decision.

Within hours of the court's ruling, Lt. Gov. Phil Bryant held a press conference with former Arkansas Gov. Mike Huckabee who was in town for a "Yes on 26" campaign kick-off event that night.

The "Yes on 26" campaign in support of the amendment formed in June and has two full-time staff members and several volunteers. The campaign is funded through private donors and anti-abortion organizations throughout the country.

Organizations such as the ACLU and Planned Parenthood spoke out against the measure, saying it could undermine women's access to birth control, in vitro fertilization and "life-saving medical procedures."

"This measure is harmful to women and has no place on the ballot," Bear Atwood, ACLU legal director said in a statement last week.

Within a day after the ruling, a political action committee called "Mississippians for Healthy Families" set up a Facebook page to oppose the initiative. Atwood said several individuals and organizations have hired lobbyist Stan Flint to run a campaign against the amendment. The Facebook page has more than 200 members, and Mississippians for Healthy Families will soon have campaign gear available to the public. The campaign is meant to be a grass roots effort, Atwood said.

Greg Sanders, deputy director of "Yes on 26," said his organization has support from Personhood USA, Georgia Right to Life, Prolife Mississippi and Personhood Mississippi as well as churches and the American Family Association. The campaign's website lists Bryant at the co-chairman. Sanders said that some of those organizations are funding his campaign, but could not say which ones. The campaign's website has resources for churches and resource packages for supporters that include push cards, T-shirts, stickers and yard signs.

"This is very much grassroots," Sanders said. "We are using media with radio, Facebook and Twitter. We will also have billboards and at some point (will) have television ads."

Sanders said his campaign is focusing on simply defining the word "person" in the Constitution as beginning at fertilization. He said it would not prevent people from using condoms and "certain" birth-control pills. Morning-after pills would be illegal under the provision, he said.

"If we have some sincere questions, we will address that," he said. "We are not afraid in any way to look at unintended consequences."

Sanders would not say if supporters ultimately want the initiative to go to the U.S. Supreme Court to have a shot at overturning Roe vs. Wade.

Jackson attorney Rob McDuff, who filed the suit on behalf of two residents, predicted that if the measure passed, he may file another challenge.

"We will see what happens in November and then decide to see if there are any further steps to take," he said. "... One of the problems of this amendment is that it raises a lot of questions that creates confusion for people. If it does pass, it will have a very cumbersome process involved in how this effects the rights of people."

ACLU Communications Manager Shelia Byrd referred all questions about Mississippians for Healthy Families' efforts against the initiative to Flint. Representatives from Planned Parenthood and Flint were not immediately available for comment for this story.

Here's a link to more information about this initiative.

Here is a press release I just got from Missisippians for Healthy Families: Today in a disappointing move, the Mississippi Supreme Court cleared the way for a vote this November 8th on the constitutional ballot initiative # 26. This initiative, if passed, would amend the Mississippi Constitution’s Bill of Rights to include the definition of "person" so as to include every human being from the moment of fertilization, cloning, or the equivalent thereof. This would be bad for Mississippi families. This proposed constitutional amendment is an extreme attempt to deny essential health and reproductive options and services to Mississippi women and their families. It would mandate unprecedented government intrusion into our families’ medical decisions and relationships with our doctors. It would further give politicians the power to decide life and death questions that have historically been protected from government intrusion. In the coming weeks Mississippians for Healthy Families will be informing voters about this ballot initiative. Mississippi families need to know that voting yes on initiative #26 will eliminate commonly used birth control pills, eliminate clinically assisted fertility techniques such as “In Vitro Fertilization”, thereby denying children to couples who otherwise would be childless; and criminalize the termination of any pregnancy including those caused by rape and/or incest and those which pose a danger to the life of the mother. This initiative would drive up the cost of Medicaid, Medicare, health insurance and medical malpractice insurance, give legal protection to cloned embryos and end embryonic stem cell research While giving politicians the unprecedented intrusion into deeply personal medical and family decisions, this initiative would also change hundreds of laws and standards that have long been settled, including inheritance laws, end of life decisions, and standards of care for medical services. Mississippi voters need to clearly understand that NO OTHER state has passed such an extreme initiative or radical legislation to give legal status to a person from the time of conception. Mississippians for Healthy Families looks forward to a factual dialogue. We are convinced that the facts will compel Mississippi families to VOTE NO on #26.

I do wish Mississippians would Vote according to the Facts, but sadly, many don't have access to the Facts. Here is my take on #26 : http://bobbyshead.blogspot.com/2011/08/vote-no-on-26-mississippi-here-is-why.html

To be fair, the Facebook Groups "Vote no on Mississippi Amendment 26" and "Mississippians against Personhood Amendment" both started before the "official" campaign mentioned here and both are totally grass roots efforts. Many from those two groups will join the Healthy Families group, but I think they deserve more credit. http://www.facebook.com/groups/212142458816903/ and http://www.facebook.com/groups/138247762924257/