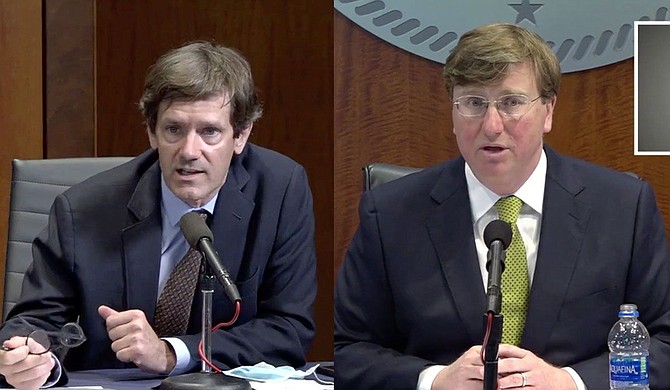 The Jackson Free Press editorial team has been hot on the trail of COVID-19 information since we started transitioning to remote reporting on March 12. But it’s often been a slog to get good and relevant information about the spread of the coronavirus that isn’t either confusing or incomplete, or what we get may combine apples and oranges.

I don’t know if this is political, incompetence or both, but it needs to end.

The confusion, of course, started about the time that Gov. Tate Reeves returned from vacation in Spain to a state exploding into a pandemic crisis with no real plans to flatten the curve here. It took bipartisan pressure, tough reporting and even an online petition to get him to finally issue an executive order to start slowing commerce. Even then, his order was a mess of confusion about what was “essential” (most everything) and what wasn’t but also exempt from social-distancing rules (department stores, shopping centers and offices).

After we reported the confusion and the fact that Reeves’ order could cause chaos in towns and counties with conflicting rules, we had to navigate a lot of finger-pointing, and even name-calling and Twitter tantrums by Reeves’ deputy and journalist friends even though our reporting was accurate. Why? Because the order was a mess of confusion and contradiction. Obfuscation on Twitter didn’t obscure that.

Then, it took weeks of media pounding the desk for race demographics before the Department of Health stopped foot-dragging and confirmed what we believed all along—the virus was disproportionately affecting people of color, especially African Americans. Was that because Reeves wanted to get his Confederate Heritage Month proclamation out of the way first?

Fast-forward to last week. State Health Officer Dr. Thomas Dobbs admitted that the Mississippi State Department of Health was releasing COVID-19 testing numbers that mix two different kinds of tests—antibody and viral—which national experts say render the combined number “uninterpretable. But, of course, combining them makes the testing number sound more impressive. Dr. Dobbs, who has impressed me in many ways as he navigates a political rat’s nest between science and politics, defended that mix at a press briefing last week.

“So, you know, we can separate them out,” Dobbs said. “That’s not a big deal. I don’t think it’s an inflation of numbers. It’s just a different mechanism of identifying an infection.” Except, it is a big deal.

Releasing the names of long-term care facilities, including nursing homes, with COVID-19 infections is also a huge deal. As of press time on May 26, 121 of them have 332 coronavirus-related deaths, more than half the state’s total. Let that sink in.

Our beloved elders are dying due to nursing-home outbreaks, and we can’t know which ones we should examine closer to see who owns them and how that compares to their facilities in other states.

Does the same operator own several? What safety procedures do they have in place? What are those owners doing to counter COVID-19 growth?

The public doesn’t know because, we’re told, it’s a privacy issue. No, it’s not. The rumor mill is in overdrive about nursing homes, so people around the state are living in fear of what they don’t know. We hear from them constantly. Media are not asking for names of the seniors or staffers with the virus. The public, including AARP, wants the names of the nursing homes. Now.

Why the secrecy? Let’s just say that nursing homes are big business in Mississippi and beyond. Some of the facilities are like local outlets of big-box retailers, and nursing-home operators and shareholders are in it for money just like other corporations.

They also don’t want to be sued. As I reported back in 2005, the 14 largest nursing-home chains had formed an alliance to help speed nursing-home consolidation in the United States. Former Mississippi Gov. Haley Barbour’s mega-lobbying firm in Washington represented them.

U.S. nursing-home chains not only rake in a lot of government money, but they lobby for tort reform and immunity against lawsuits; they give big money to candidates including our current governor; and some have even been twisted up in illegal campaign-finance schemes in the past.

Still, as common sense dictates, the threat of lawsuits can keep nursing-home corporations from cutting too many corners in service to shareholder value and profit, just like in other corporations, from mega-news chains to the ambulance industry.

Put simply: Nursing homes are huge business. Is this why the State of Mississippi won’t follow the lead of states including Georgia, North Carolina, California, Minnesota, New York and Florida, among others? To be honest, little else makes sense.

Look, I get it. Dr. Dobbs serves at the pleasure of Tate Reeves, who throughout this crisis has come across like he cares more about getting people to leave the house and spend money than he does about limiting commerce and social mixing long enough to not have a worse spike of COVID-19 later.

He often seems like the kid who can’t wait to grab the second marshmallow, an apt simile I saw a professor use on Twitter recently for people who can't sit still long enough to protect themselves and others from a pandemic.

But the job of the Mississippi State Department of Health is not to do a political dance in a country where the U.S. president threatens to move the Republican National Convention out of North Carolina if the governor doesn’t hurry on up and loosen social-distancing safety requirements—that is, put politics over safety.

Georgia got busted for putting out false graphics showing the virus slowing as the state started to reopen. And in Florida, a fired scientist has accused that state’s leaders of falsifying data for the same reasons.

We know one major thing Mississippi, Georgia and Florida have in common—a governor who lives and breathes the belief that a president who dragged his feet on and downplayed COVID-19, allowing this country to blow up into one of the worst pandemic crises in the world, can do no wrong. Watching COVID-19 play out in Mississippi, it’s really hard to believe that Tate Reeves is more concerned about seniors in nursing homes than about keeping the senior up in the White House happy.

Regardless, we need the Mississippi State Department of Health to rise above politics and transparently serve the people of Mississippi, giving us accurate information the people of this state need daily. That is their job, regardless of who is in the Governor’s Mansion or the White House.