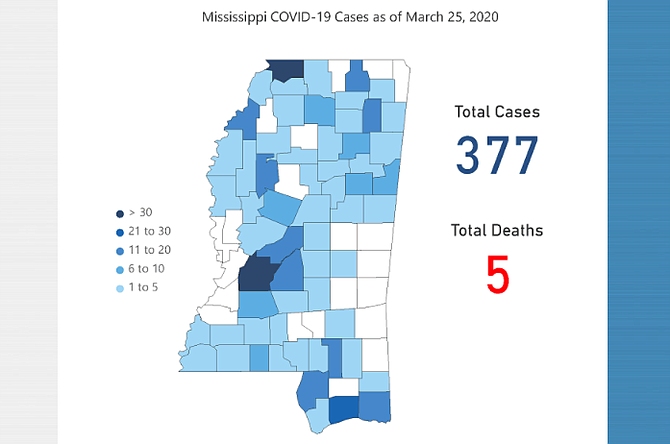 A Holmes County man in his 60s is the second person to die from the coronavirus in the state, the Mississippi State Department of Health announced this morning. Confirmed COVID-19 cases in Mississippi rose to 371 today, a 364% increase over the 80 cases reported last Friday. Photo courtesy MSDH

The following story is updated to reflect the four COVID-19 deaths the Mississippi State Department of Health reported throughout today, March 25, 2020.

MSDH announced the first death on March 19—Bay St. Louis barber Howard “Fade” Pickens, who was in his 60s.

Mississippi’s four male deaths track Internationally with COVID-19 data, with more men dying from the novel coronavirus than women. However, MSDH’s demographic figures, last updated March 24, have consistently shown more women with COVID-19 in Mississippi than men. One physician who tracks pandemic trends, who asked that his name be withheld, told the Jackson Free Press that this gender variation, among others, could mean that the infection in men at least may be undercounted in Mississippi, perhaps due to the limited testing available in Mississippi and the U.S. as a whole. Tests are only available to Mississippians with a 100.4-degree fever and severe cough or chest pain.

MSDH is also reporting age patterns among Mississippi’s cases to date. As of yesterday, its reported cases show 143 people infected over the age of 60 and 58 cases in their 50s.

Still, MSDH’s charts show many infected younger people, showing enough serious symptoms to qualify for testing in Mississippi: 64 cases in their 40s, 50 in their 30s, 55 from age 18 to 29, and six children under age 18. As of March 24, 31% were known to be hospitalized. Today’s new 57 cases are not included in those demographics, updated yesterday.

MSDH reported today that 1,945 people have been tested, not including those tested in private labs, although the confirmed cases do include them. That means that the State of Mississippi has tested .065% of Mississippi’s population, or less than one-tenth of 1%.

The lack of available testing also means that non-symptomatic Mississippians can easily be spreading the virus when they are around other people and out in public. The need to “flatten the curve” to reduce the spread and help keep the medical system from being overloaded, especially in rural areas where hospitals are crippled due to lack of Medicaid expansion, exploded in Mississippi over the weekend due to reports around the state of crowded beaches, flea markets, restaurants (even with communal dining and buffets) and auto auctions.

That led over the weekend to calls for Gov. Tate Reeves to issue a consistent executive order for all non-essential workers to “shelter at home,” much as Louisiana and other states have done to try to curb the rise in cases. But he flatly rejected that call in a nod to the business community.

In Mississippi, some mayors and other local officials have issued their own orders in the absence of a state mandate to protect people locally, preferring to take a wait-and-see approach through much of yesterday, even as the MSDH reported the most cases in one day to date, at 71.

However, Jackson Free Press reporter Nick Judin reported last night that Reeves’ order, released late in the day, instead created an exhaustive list of “essential” businesses and organizations that do not have to close, including car dealerships, “offices” and religious facilities, among many others. On Friday, MSDH had recommended that people not attend church, funerals or weddings.