Dice Rolls and Tokens and Cards, Oh My! 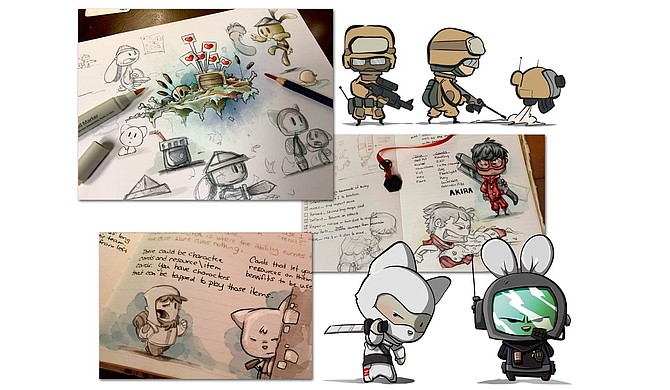 Certifiable Studios in Ridgeland produces multifaceted board games that feature original art and a variety of mechanics. Backers both local and from around the world have established an open online community so that people who are interested in the creative studio’s products can learn more. Photo courtesy Certifiable Studios

Whether your idea of a fun Saturday night entails braving an expedition through Antarctic tundra or gallivanting through a land of fantastical beasts to collect bounties with your adventuring party, Certifiable Studios, a board-game-centric art studio in the Jackson area, has you covered.

Co-owners Jesse Labbé and Rick Moore founded Certifiable Studios about five years ago after the former had developed a board game that he wanted to bring to the next level and presented it to Moore, who suggested they start a gaming studio themselves.

"I've been into games forever, and I've been an illustrator for longer," Labbé says. "I think I picked up on games because it was a way to interact with my illustrations. Most of the time, you draw something, and you're just stuck looking at it. This was a way to take the characters I was drawing to another setting where I can now control them in a gaming environment."

Marketing expert Opie Cooper joined Labbé and Moore, who also serves as the CEO of advertising agency Mad Genius, and the trio set off to work. Shortly afterward, Certifiable launched its first game, "Endangered Orphans of Condyle Cove," a whimsical survival game where players avoid being captured by the Boogeyman, and the game received more than $300,000 in backing through Kickstarter.

"('Endangered Orphans') just blew everybody away and developed the community that we have since become known for," says Brent Hearn, the company's wordsmith. "A lot of companies create great products and do a good job with their campaigns, but they don't necessarily engage to the level that we showed was possible with that campaign. And that community has just grown since then."

During the game's launch, Labbé invited Anthony Coffey, whom he had met while attending art school in Dallas, to join Certifiable Studios. The two had previously worked together on a graphic novel series titled, "Berona's War," and Coffey accepted the position and moved to the Jackson area in early 2017.

A jack-of-all-trades, Coffey serves as an illustrator, designer and sculptor. Among many other creative responsibilities, he uses the 3D printer in his office to fine-tune game-piece prototypes based on printouts from China before they are sent to the factory. Coffey and Labbé illustrate the majority of characters within Certifiable's properties.

The initial ideas for Certifiable's published games thus far have come from Labbé, who records them in his notebook and then translates them onto concept paper so that he and Coffey can world-build and develop the game's mechanics and "turn it into something much bigger and better," Labbé says.

"At the end of the day, it's a very fluid process, at least here," Coffey says. "When you are one of the few people actually coming up with the idea, illustrating the idea, designing the idea, I don't have to go to another department and ask, 'How big should these minis be?' It's literally, 'How big do you want them to be?' because you are the one creating it. So there's a little more freedom that adds a little more flexibility in the design process."

Since "Endangered Orphans of Condyle Cove," Certifiable Studios has successfully produced four more games: "Who Goes There?," "Stuffed," "D6" and "Who Goes There? 2.0." The games use combinations of dice, tokens, cards, miniatures, character sheets and other game pieces and mechanics, and people from every continent save Antarctica have purchased copies of the studio's various works.

"Who Goes There?" and "2.0" are based on John W. Campbell's novella of the same name. The science-fiction games follow the premises of the original work's plot, wherein researchers travel to Antarctica and discover an alien entity that attempts to infect the players. Players select a character and work collaboratively to escape both the frozen terrain and The Thing.

"Stuffed" is a multiplayer game featuring anthropomorphized animals that involves rolling dice to earn coins and recruit new teammates to accomplish the main mission: saving the players' souls from a wall of thorny vines.

In "Dungeons, Dudes, Dames, Danger, Dice and Dragons!," better known as "D6," participants role-play as characters who are themselves playing a fantasy role-playing game. The adventuring party works together to fight monsters and collect bounties. With 100 optional campaign scenarios listed in the rulebook, the game is designed for replayability.

Certifiable Studios' loyal following has formed both a strong online and local community. Backers created a Discord server where fans discuss the games or help budding fans learn more about the studio's products.

Pre-COVID, Certifiable would host open game nights on the first Friday of every month at their Ridgeland headquarters, which would typically pull in 40 to 50 people who gather to play games and mingle.

Labbé praised the local community, many of whom would voluntarily bring in snacks like baked goods or pizza for everyone else or welcome new participants.

"We had one girl come in by herself like, 'Is this the game night thing?' And then everybody (begins enthusiastically saying), 'We have room over here. Come over here,'" Labbé says. "Everybody just opened their arms up, and she picked a table, and that's just the kind of community we have here. Everybody is very, 'Come on, we have room for you.'"

First Friday game nights have been postponed for the time being because of the pandemic, but Certifiable looks forward to being able to host again in the future.

The studio also connects with fans through Twitch videos, wherein staff members play-test various board games, and through its YouTube channel, although video frequency has decreased due to COVID-19.

Presently, Certifiable Studios is working on "Endangered Orphans in the House of Rath," a second edition of the original game that started it all. Announced in March, "House of Rath" is the first game that Certifiable is publishing that was originally submitted as a completed game by someone outside of the studio.

"This guy brought us a packaged, boxed game. It wasn't this produced thing. He did it all by himself, but it was done. He presented it to us, we checked it out, and we moved on with it," Labbé says.

"We have people who give us ideas, but if it's too much work on our end, we don't have time for that. But if they bring it, and it's something they're proud of—they've had their friends test it and really like it—there's no reason if we like it that we're not going to do it."