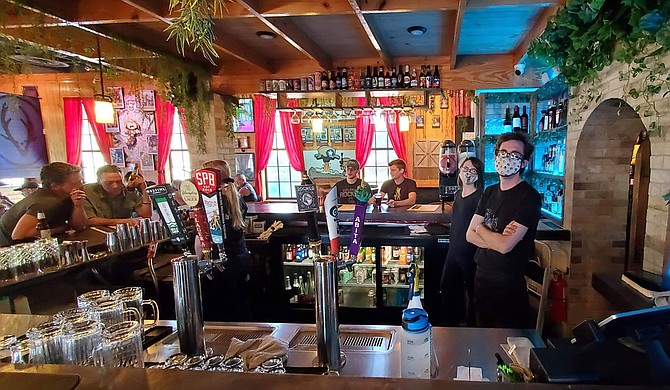 Dogmud Tavern, a Ridgeland-based gaming bar and restaurant connected to local game developer Certifiable Studios, allows guests to choose from the business’ vast collection of board or video games to play for free while they eat and drink. Walls are adorned with artwork from the aforementioned creative studios’ properties. Photo courtesy Dogmud Tavern

Since Ridgeland-based gaming bar Dogmud Tavern opened on April 1, 2021, patrons have come far and wide to immerse themselves in the experience, with some guests traveling hundreds of miles. Jesse Labbé and Rick Moore, co-founders of local creative studio and board-game developer Certifiable Studios, opened the Pear Orchard Road locale to serve as a new venue for the First Friday gaming events that Certifiable Studios used to host on the first Friday of every month at the company's headquarters.

Labbé and Moore had been toying around with the concept for a while, although the COVID-19 pandemic impeded their progress on the project. With vaccines available across the state and cases of the virus at significantly lower numbers than they were a short half-year ago, the two business partners decided that spring would be the right time to put their cards on the table, so to speak.

As a sibling-company of sorts to Certifiable Studios, Dogmud features iconic artwork from the studio's various gaming properties, including "Endangered Orphans," "Who Goes There?," "Stuffed" and "D6"—most of which Labbe designed—along every wall, in addition to other game-centric and fantasy-like adornments.

The name "Dogmud" actually stems from a running joke from Labbé's college days, when he and friends used to spend the occasional evening in a bar. Labbé, not one for stiffer drinks, would normally order what he would call "fru fru drinks with umbrellas" and become the target of playful jesting. One night, Labbé asked the bartender serving them if the establishment had any "dogmud," which he described as an earthy sort of adult beverage.

After checking around, the bartender said that they must be out. Labbé, who had invented the drink name on the spot, subsequently enjoyed a hearty laugh with his pals. Since then, "dogmud" became an inside joke, first among Labbé's friends, and later with his colleagues at Certifiable Studios, with the developer including "dogmud" as a game mechanic in a number of the company's games, in one form or another.

Now, thanks to Dogmud Tavern, "dogmud" is no longer simply a fictional beverage, as the pub serves its own custom-made brew that they have christened "Dogmud," a dark lager available on draft. Other draftable beers guests can order from the bar include Colsons, Sopro Suzy B, Abita Andygator, Yuengling and Destihl Key Lime Go. The pub offers over two dozen other beers in either cans or bottles.

True to its label as a gaming bar, Dogmud Tavern houses a plethora of board games—both ones from Certifiable Studios and other popular selects like Catan, Splendor, Ticket to Ride, Betrayal at House on the Hill and dozens more—that the bar invites visitors to request and play at its various gaming tables, which double as dining tables. A full list of Dogmud's available board games can be found in the Games tab of the business' website.

Meanwhile, another seating area features gaming consoles that allow guests to play a number of one- and two-player NES and SNES games, such as Pac-Man, Super Mario Bros. 3, Galaga, The Legend of Zelda, Donkey Kong Country, Star Fox and many other classic 8-bit and 16-bit video games. The lounging area also showcases free-to-play arcade machines with fighting games so that customers can nostalgically button-mash their way to victory.

Each Thursday from 7 p.m. to 9 p.m., Dogmud Tavern hosts Trivia Night at the Tavern. Entry costs $5 per person. Winners receive cash prizes, and drink specials are held throughout the weekly event.

Frederick Roseman, a graphic artist in the area, has trekked through Dogmud Tavern's doors a few times since the grand opening. "What I love most about the place is the atmosphere," he says. "It's a really chill environment for not just gaming but also for creativity. It is my new getaway from home when I want to just get out and create art somewhere." His favorite dish is the Bayou Dragon pizza, which is coated in a white sauce and topped with creole seasoning, a five-cheese blend, alligator sausage, caramelized onions and bell peppers.

"Most of what we serve is made in-house," Labbé says of Dogmud's menu, which contains a list of options for appetizers, salads, "mud dogs," pizzas, sandwiches, desserts and specialty cocktails—each with a similarly fun and punny name that ties back to the restaurant's theme or to a Certifiable Studio product.

Those who want to take a piece of Dogmud Tavern home with them can browse the gift shop corner, which displays various board games, plushes, apparel and other merchandise available for purchase.