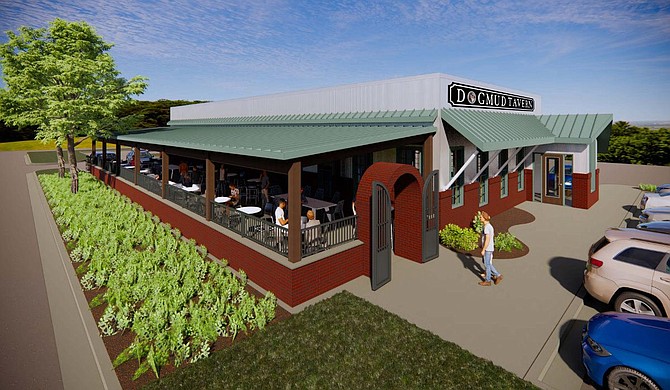 Dogmud Tavern, a Ridgeland-based gaming bar and restaurant connected to local game developer Certifiable Studios that opened on April 1, 2021, announced on Friday, Oct. 1, that it will be expanding its facilities in honor of the tavern's six-month anniversary. Photo courtesy Dogmud Tavern

Dogmud Tavern (681 S. Pear Orchard Road, Ridgeland), a Ridgeland-based gaming bar and restaurant connected to local game developer Certifiable Studios that opened on April 1, 2021, announced on Friday, Oct. 1, that it will be expanding its facilities in honor of the tavern's six-month anniversary.

The renovations will include a new 1,800-square-foot covered outdoor patio, which will go in place of an unused drive-thru window that was already in place on the building before Dogmud Tavern opened. The new addition will seat roughly 80 people. Workers broke ground for the project on Monday, Oct. 4.

"Our new patio will offer a nice lounge setting with more space for playing games, as well as a nice outdoor area for guests to enjoy lunch on a pretty day," Rick Moore, co-owner of Dogmud Tavern and Certifiable Studios, says. "It's a nice addition because there have been times where we just don't have enough space, not to mention that outdoor seating is something people who are still dealing with the pandemic will appreciate."

Dogmud Tavern offers board games from Certifiable Studios as well as popular options such as Catan, Splendor, Ticket to Ride, Betrayal at House on the Hill and more. The tavern also has gaming consoles for Pac-Man, Super Mario Bros. 3, Galaga, The Legend of Zelda, Donkey Kong Country, Star Fox and more, as well as free-to-play arcade machines and a weekly Trivia Night.

Extra Table Partners with Cathead Distillery Through Everyone Eats Program

Extra Table, a nonprofit that provides food to soup kitchens and food pantries throughout Mississippi, recently partnered with Cathead Distillery in Jackson to combat food insecurity in the state.

As part of a promotion for its new cocktail, Cathead Sparkling, the distillery put proceeds from each case of Cathead Sparkling sold in Mississippi during September toward purchasing food on behalf of Extra Table, which amounted to a $60,000 donation. Cathead Distillery and Mississippi Cathead Distributors also pledged to cover the cost of food to Extra Table’s state-wide partners for the full month of October.

Each month, Extra Table purchases nutritious, shelf stable food for roughly 60 food pantry partners throughout Mississippi. In 2021, Extra Table also launched the Everyone Eats program, which allows individuals and business partners to work with the organization to provide food for Mississippi for one month.

For more information on Extra Table and the Everyone Eats program, visit extratable.org or call 601-264-0672.

Magnolia Speech School recently announced the launch of the public phase of its Capital Campaign, which will raise funds for the construction of a new campus and facilities. A release from the school states that it is 80% of the way towards reaching its goal as of this writing, and it is now reaching out to the public to fund the last 20%.

Funds raised will support the construction of the new school and the purchase of new learning materials. When the construction is complete, MSS will move from its current location at 733 Flag Chapel Road in Jackson to 414 Bozeman Road in Madison.

MSS' new facility will integrate construction materials and educational and therapeutic technology designed to accommodate the needs of children with hearing loss and communication disorders. The facility will also include an expanded clinic for outpatient services.

The school also announced that it is partnering with Trustmark Bank, which will complete a dollar-for-dollar match up to $125,000 as part of the Capital Campaign.