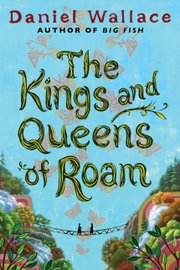 In "The Kings and Queens of Roam," author Daniel Wallace illustrates the power words have to make worlds, both in the tragic whimsy of the world his words create and in the sad, scary world one character builds for another.

Essentially, "The Kings and Queens of Roam" is about two sisters, one horribly ugly and the other impossibly beautiful--but blind--and the turns their lives take once they are orphaned. The sisters, Rachel and Helen, are inexorably tied together, both by their circumstances and by the lies Helen tells as a child, lies that take on a life of their own as the sisters mature into adults.

Wallace uses a nonlinear timeline, jumping back and forth between the sisters' story, the tale of Roam's founding and several secondary characters' backstories. The stories are told from various character perspectives.

Roam is a small, decaying town founded on greed, lies and a curse. Once a thriving settlement based around the silk factory, these days more ghosts than people inhabit it. Life is simple for the folks there, mainly because they don't have much.

The novel is strongest when it explores the most basic of desires. "I imagined a different sort of life than the one I led," one character says, "but I suppose everybody could say the same."

It is hard for anyone familiar with Wallace's most well-known work, "Big Fish" not to make comparisons between the two stories. "Big Fish" was adapted into a film starring Ewan McGregor and is in the works to become a Broadway musical this year.

Like "Big Fish," this novel straddles the line between fantasy and reality, with just hints of magic. Rather that full-on fantasy, it has the feeling of a tall tale, of stories stretched to their most embellished and extravagant points--a girl so ugly her face seems to be made up of all the stitched-together leftover parts of other faces. A man so large he is an almost-giant, and another so small his feet rest in bed two feet shorter than the feet of the woman he loves. A house with so many rooms and staircases, the family that lives in it has never gotten to see them all. A factory that churns out enough silk to cover the town in a month.

Although the book is not explicitly set in the south (it's not explicitly set anywhere), Wallace's southern roots break through in the themes he works through: the importance of family, the tradition of storytelling and the increasing isolation of a small town left behind by the country at large.

Coming in at just under 300 pages, the novel is a quick read. In fact, its biggest drawback is that it feels too quick. The narrative skims the surface, skating across the top rather than diving deep into a specific moment or scene. Even the emotional climax of the book feels over in a blink.

In the end, the story is about human nature, about indulging in our darkest desires and, ultimately, about how people respond to the circumstances life hands them. The line that sticks with me, after turning the final page, comes from a character who falls in love with one of the sisters: "That's what life is, isn't it? Making a world all your own inside the one that was given you, together with someone else?"