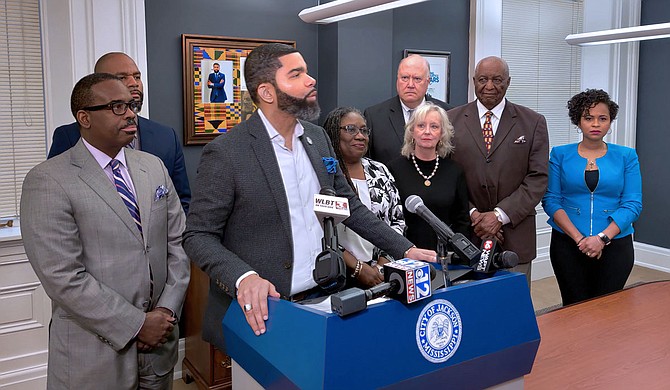 The City of Jackson has reached a $89.8 million settlement with Siemens, Inc., Mayor Chokwe A. Lumumba announced during a press conference on Feb. 19, 2020. Photo by Nick Judin

The City of Jackson has reached a $89.8 million settlement with Siemens Inc., Mayor Chokwe A. Lumumba announced yesterday. The settlement comes approximately eight months after the City filed a lawsuit against the multinational corporation and local subcontractors for $225 million in damages stemming from their botched work on Jackson's water-sewer infrastructure and billing system.

Lumumba framed his announcement by reminding those watching that he ran for mayor on an anti-corruption platform, a point that he has reiterated repeatedly, including at his State of the City address last fall.

"In May 2017, I stood before you as I campaigned to become your mayor and I told you that we would build an administration that would be centered on ending corruption and determined to fight against contracts that do not serve the people," he said during the Feb. 19 press conference at City Hall.

"I committed to you that I would sue Siemens for the harm they caused our city and the community-at-large. Promise made, promise kept," the mayor said before revealing that the City had reached a $89,800,627 settlement with Siemens—the full amount of the January 2013 Siemens contract that outgoing Mayor Harvey Johnson Jr. had signed on Dec. 28, 2012.

"I am pleased to announce that we have recovered every penny that was taken from our community by the Siemens Corporation," Lumumba added, before addressing the role of local minority contractors in Jackson's ongoing water-sewer crisis.

"Siemens and its subcontractors manipulated the minority contracting rules to inflate the cost of the system from approximately $45 million to (nearly) $90 million. This was done through reselling meters in order to inflate their cost so that middlemen could line their pockets," he said.

In 2013, the City of Jackson entered into a $90-million contract with Siemens to upgrade Jackson's sewer lines and water treatment plants and to install a new automated water-sewer billing system. Court records show that, in the months leading up to the contract, Siemens had promised the City of Jackson that the deal would result in $120 million in guaranteed savings for the city. The corporation went so far as to state that the savings generated by the new water-sewer repairs and billing system alone would end up paying for the $90 million project.

"In its pitch to the City, Siemens repeatedly invoked the guaranteed structure of an energy performance contract," the City's lawsuit against Siemens, filed in June 2019, reads. "When it came time to execute an agreement, Siemens effectuated a 'bait-and-switch' that fell short of a true performance contract."

Instead of generating revenue or savings for the City, the work Siemens promised resulted in problems that have thrown Jackson's water-sewer system into a state of crisis and the City further into debt.

Not long after Siemens and its subcontractors installed the new billing system, residents reported not receiving any bills, sometimes for months or years. Those who did receive water bills reported inaccurate—and unusually high—amounts, often leaving them unpaid.

Last fall, Jackson Public Works Director Bob Miller stated at a press conference that the City sought to recover approximately $50 million from unpaid water bills alone, owing to "tens of thousands" of delinquent accounts. The unpaid bills have depleted the City's enterprise fund and forced the city to dip into its general fund to continue making repairs on Jackson's deteriorating water-sewer system. The City has also had to take out loans to make vital water-sewer repairs, such as the $7-million dollar emergency loan that city council approved in October.

"We've heard someone state in recent weeks that he simply didn't see the point of this lawsuit," Lumumba said. "Additionally, one of the Siemens subcontractors remarked, 'It's a sad day in our City when we have a fake African American mayor who clearly does not understand the history and the struggles of black businesses in our city.' Let me be clear, this lawsuit was never about suing black businesses, it was about suing bad businesses."

The mayor went on to discuss the havoc that the Siemens deal wreaked on Jacksonians, who have had to make difficult financial choices. Some residents have had their water cut off because of delinquent accounts. Residents filed a separate lawsuit against the City of Jackson last June, days after the City sued Siemens. That case is still pending.

"While we are pleased with this settlement, it does not represent the end, but rather, the end of the beginning. We must now use these funds to repair the damage that has been inflicted on our community," said the mayor, emphasizing the need to repair the City's "broken meter and billing system."

It is unclear how the City will spend the $89.8 million recovered through the settlement, but the mayor said that his administration would seek residents' input.

"We look forward in the coming weeks to hosting community discussions on how we use this money," he said.

In a Facebook post this morning, Ward 2 Councilman Melvin Priester Jr. wrote that approximately $30 million, or one-third, of the settlement funds would go towards attorneys' fees, thus leaving the City $60 million.

Court records show that the Mississippi-based firm Winston J. Thompson III & Associates, together with the firm Lightfoot, Franklin & White, which has offices in Alabama and Texas, had filed the original lawsuit on behalf of the City of Jackson. Thompson previously served as an assistant district attorney under then-District Attorney Robert Shuler Smith.

In a phone interview this morning, Priester praised Mayor Lumumba for putting together what he called "the absolute perfect team to try this case."

"I was very impressed," Priester said, highlighting in particular the legal team's speed as well as the sophisticated techniques it used to try what he called "a very complex case."

Priester added that the 33% contingency fee is very common. "While it's a very large amount of money that these attorneys are being paid, I do think it is justified based on the caliber of attorneys we retained, the speed at which they were able to get a resolution, and the techniques they used to bring this case to a resolution," he said.

On Feb. 19, Clarion-Ledger reporter Justin Vicory tweeted that a representative from Siemens had stated that the settlement “is not yet finalized.”

"Siemens disagrees strongly with the Mayor’s characterization of the company and contract. Among other shortcomings, this one-sided view failed to acknowledge broader water and sewer system issues…,” the company stated to the Clarion Ledger. Siemens then sent this same statement to a request for an interview with the Jackson Free Press after this story originally went to press. The spokesperson declined an interview "because the settlement is not yet finalized, Siemens cannot comment further."

This story will be updated when the City of Jackson responds to Siemens' claim.

"From our perspective, we've reached a settlement," Priester said. "It is my understanding that everything is in final order," he said, adding that while there might be "small technicalities" that need to be addressed, that the City has reached an agreement with Siemens.