How to Spend Siemens Settlement Creates Ruckus Between Mayor, Council 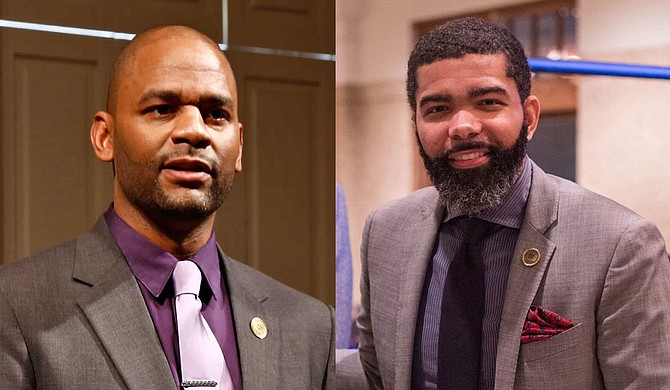 Ward 4 Councilman De’Keither Stamps (left) successfully proposed a transfer of Siemens settlement funds for use on the Highway 80 corridor, but Mayor Chokwe A. Lumumba (right) is not pleased. Photos by Imani Khayyam/File photo and City of Jackson.

How the City of Jackson will spend the $89.8 million recovered in the Siemens settlement has generated a ruckus between the mayor and the Jackson City Council.

In February, Mayor Chokwe Antar Lumumba announced the settlement with Siemens, resulting from the City’s lawsuit filed against the corporation and several local subcontractors, seeking damages for botched work on Jackson's water-sewer infrastructure and billing system.

Stamps said the earmarked money would help transform Jackson’s Highway 80 corridor, which would, in turn, create jobs and curb crime.

"When we received money from the Siemens funds, we talked about this as one of those funds depleted to balance things out over the last few years. What we are asking is to restore those funds,” Stamps said, referring to the City’s Grand Gulf Nuclear Station fund.

"This just segregates the money," he added, "so that we can start having a conversation with some agencies to work this out. We are going to make a case to increase the revenue from that area (Highway 80) and for the City of Jackson as a whole.”

The council passed the proposal by a razor-thin margin of 4-to-3, with Ward 2 Councilman Melvin V. Priester Jr., Ward 5 Councilman Charles H. Tillman, and Council President Virgi Lindsay of Ward 7 voting against it.

While the vote was taking place, Lumumba was behind City Hall addressing the media on the City’s phase-one reopening due to COVID-19 pandemic.

After learning that Stamps’ proposal had passed, the mayor promptly responded to the press on the matter, expressing deep displeasure and anger. He vigorously objected to the move and did not rule out using his veto power against it, saying it would unbalance the budget, leaving the City in the crosshairs of state law.

Inside the meeting, Stamps, however, said the proposal merely sets aside the money, not spends it right away, and does not imperil the City’s financial standing.

"If I were asking for $1.6 million to put into the police department, people would vote for it,” Stamps said before the vote. “I am only asking for money to put into an area to create some economic development to decrease crime through things that improve the economy so we can pay our bills.

The mayor, nevertheless, in his remarks to the press, declared that the decision was "premature" and "problematic." He blamed the four councilmen who voted for the revision: Ward 1 Councilman Ashby Foote, Ward 3 Councilman Kenneth Stokes, Ward 6 Councilman Aaron Banks and Stamps.

"From day one,” Lumumba said, “it has been Councilmen Banks, Stamps and Stokes and now Councilman Foote, who is supposed to be a conservative, utilizing the money without regard to how it could affect our budget."

The mayor said the fund transfer could lead to problems with the bonds insurers as the City must have a certain amount in reserve status.

Lumumba said the council should have tabled the vote until the next week, telling the press, "We owe the citizens transparency; we owe them honesty."

"While $1.6 million does not seem like a lot, it puts the whole thing out of balance,” Lumumba told the press. “And now we have lied to the constituents because we told them that we would allow them to voice their concerns on this. And the administration has looked to put the money on a separate account, and we have not touched any of it because we want to be true to our words that we will be true to our constituencies."

For several minutes at the council meeting, Chief Administrative Officer Robert Blaine articulated the administration’s position to no avail, while the mayor held the COVID-19 press conference. Afterward, Blaine joined the mayor to address the press, kicking against the action of the four councilmen and reiterating that the administration wanted a delay on the vote.

Blaine told journalists that the administration would like to present its plans to fix the water system and plans for bonds security to ensure that the money can be leveraged for the future. He posited that the City must use the money from the Siemens settlement to ensure its long-term financial stability and that any attempt to preempt those plans is premature and puts Jackson at risk.

Email story tips to city/county reporter Kayode Crown at [email protected]. Follow him on Twitter at @kayodecrown. Read the history of the Siemens controversy and lawsuit at jacksonfreepress.com/siemens.