Judge Disqualifies Attorneys In Water Lawsuit Against City of Jackson 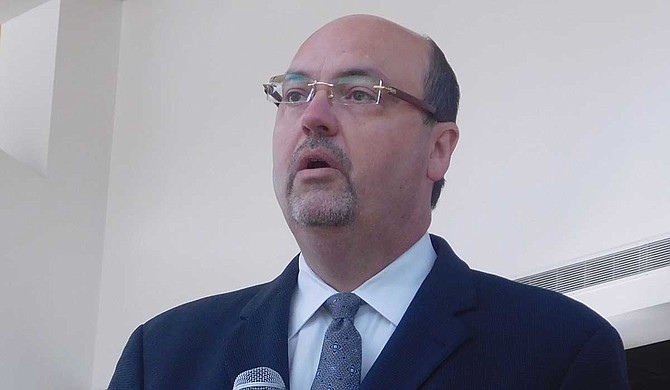 A Hinds County Chancery Court judge removed Pieter Teeuwissen, pictured, and co-counsel from a lawsuit suing the City of Jackson for cutting off water services to six residents billed upwards of $1,000 after not receiving water bills for long periods. Photo by Josh Wright

The City of Jackson, a defendant in a lawsuit over how it is handling the current water-billing crisis, sent out two press statements Wednesday night announcing a victory for its defense in the legal action.

Hinds County Chancery Court Judge Tiffany Grove has disqualified former city attorney Pieter Teeuwissen, one of the lawyers who filed the lawsuit on behalf of six Jackson residents in June. Grove explained that Teeuwissen was involved in the negotiations and enforcement of the controversial performance contracting agreement with Siemens Inc. that cost the City $90 million and is at the heart of multiple legal disputes. The City has also sued Siemens and several local subcontractors who financially benefited from the contract.

The agreement Teeuwissen worked on "is the core of both the current litigation as well as a pending lawsuit in the Circuit Court of Hinds County filed by the City against Siemens Industry," Grove wrote. 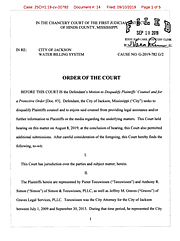 Teeuwissen, Judge Grove wrote, was city attorney between July 1, 2009, and Sept. 30, 2013. "During that time period, he represented the City in virtually all aspects of the Performance Contracting Agreement between the City and Siemens Industry; specifically, he negotiated two amendments to the Agreement and provided legal support in ensuring enforcement of the Agreement," she stated in the Sept. 10 order.

To avoid "the appearance of impropriety" under the Mississippi Rules of Professional Conduct for legal representation, Grove also disqualified Teeuwissen's law partner Anthony R. Simon, who was co-bond counsel, and Jeffrey M. Graves of Graves Legal Services, ordering them to not talk to the media about the case.

The lawsuit can continue without the three lawyers, Grove wrote. "In addition, the Court finds that Plaintiffs will not be significantly prejudiced by the disqualification of current counsel," the judge wrote.

Teeuwissen and co-counsel filed the lawsuit against the City of Jackson on June 18, 2019, charging that the City administration knew that the water-sewer billing system had failed and was not creating accurate bills but without alerting account holders. The six plaintiffs have water ranging from $1,000 to $34,000. The City cut off services to some of them who could not pay the high bills, which came after long periods of no billing due to the faulty system. Others were making payments to catch up. Most had appealed and were awaiting responses from the City of Jackson.

"(The legal system) does provide an opportunity to resolve differences to achieve some measure of justice," Teeuwissen said at a public forum on June 28. "That, ladies and gentleman, is why we filed a lawsuit on behalf of account holders with respect to the water system and the billing situation."

Customer Lawsuit Against City of Jackson

The Siemens contract to overhaul the water system—which drew approval from several mayoral administrations and multiple Jackson City Council members including the current mayor's father—is an open wound for both the City administration and Jackson residents. Siemens officially completed the agreement last year, with it and several minority subcontractors drawing hefty payments despite the continuing headaches to Jackson residents left behind.

The City sued Siemens and subcontractors in early June due to the loss of revenue from water customers, which has hurt its ability to pay the $7-million annual bond payments meant to finance the contract, Mayor Chokwe A. Lumumba said then. The mayor referred to the project as a "bait-and-switch" scenario that burned both the municipal government and residents of Jackson.

"This administration is committed to eliminating corruption and incompetence in public contracting," Lumumba said at the June 11 press conference. "We believe that the citizens of Jackson are innocent and deserve compensation for the wrongs done."

The two press statements announcing Judge Grove's order removing the attorney came from the City's social media coordinator and graphic designer, Deanna Gentry. The first statement erroneously referred to both Teeuwissen and Groves as "former city attorneys," which she corrected in a followup release at 8:39 p.m.

Aliyah Veal contributed to this story. Send City news tips to [email protected] Read more about the Siemens and water-billing controversy at jacksonfreepress.com/water.