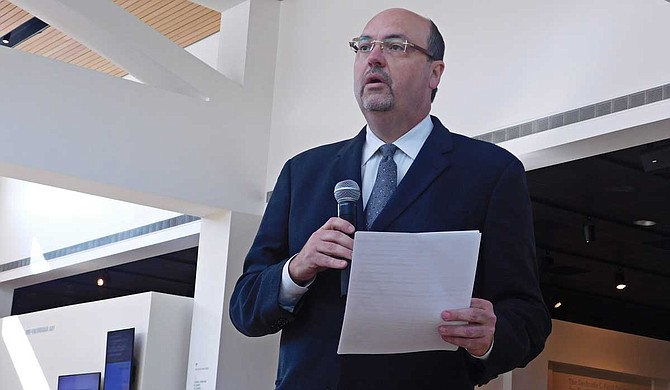 Attorney Pieter Teeuwissen discusses a citizens’ lawsuit against the City of Jackson over water billing at Refill Cafe’s Friday Forum on June 28. Photo by Josh Wright

"I sat outside the steps of city hall. I didn't even want to be there. I felt it was going to be a bad deal, and I knew they were going to task me with making sure it was legal," he told the audience.

Teeuwissen said it has been five years and nine months since he was the city attorney. He was in that position when Mayor Harvey Johnson Jr. signed the $90-million contract with Siemens Inc. in 2013 to improve the municipal water and sewer system. But the attorney was no longer working for the City of Jackson when it came time to implement the details of the agreement, he said.

"I wonder in hindsight, had there been someone who could have coordinated it, would we be here today talking about it?" Teeuwissen said Friday.

Teeuwissen and Anthony R. Simon are representing six city residents in a lawsuit filed against the City of Jackson in chancery court on June 18. The lawsuit alleges that in June 2018, the City knew the water-billing system was not giving accurate bills and that the water system had failed, but it did not tell account holders. The plaintiffs in the case have water bills that range from $1,000 to $34,000.

Customer Lawsuit Against City of Jackson

"(The legal system) does provide an opportunity to resolve differences to achieve some measure of justice," Teeuwissen said at the forum. "That, ladies and gentleman, is why we filed a lawsuit on behalf of account holders with respect to the water system and the billing situation."

Siemens officially completed the project last year, but along the way, residents have faced inconsistent and expensive water bills as a result of system failures. In turn, the loss of revenue from water customers has hindered the City's ability to pay the $7-million annual bond payments it used to finance the contract, Mayor Chokwe A. Lumumba said at a June 11 press conference.

On June 11, Mayor Chokwe A. Lumumba announced the City of Jackson was suing Siemens and a list of subcontractors over the $90-million contract, some of whom Siemens paid to install new water meters throughout Jackson and modernize the water-billing system. Lumumba referred to the project as a "bait-and-switch" scheme that has put the City in debt and burdened residents with high water bills.

"This administration is committed to eliminating corruption and incompetence in public contracting," Lumumba said at the press conference. "We believe that the citizens of Jackson are innocent and deserve compensation for the wrongs done."

Teeuwissen said the lawsuit is not about trying to make money off the City, harm it, embarrass anyone or attempt to justify the nonpayment of legitimate bills or tampering with water meters.

"I have no reason to question the current administration's efforts to fix the system, but I've represented the government now for 15 years. I got enough sense to know that the task facing the City of Jackson is a long (one) complete with pitfalls and unexpected challenges," he said.

The former city attorney emphasized that he and his partner, Anthony R. Simon, are asking the chancery court, which is a court of equity, for three things: a moratorium; an accounting for each resident so they can have proof of what they actually owe; and a neutral third party to review any challenges an account holder makes. He said the City can appoint an attorney or retired judge to listen to and resolve account-holder complaints, including deciding to adjust their bills.

"Our thought process is that's a win-win. It's a win for the account holders because they have a neutral third party in the documentation as to why their bill is what their bill is," Teeuwissen told the audience Friday. "It's a win for the city in that it restores confidence with the public that they're trying to figure out how to solve this problem."

'Send the Damn Bill to Siemens'

Teeuwissen said some account holders believe they do not get a fair say, and they also think someone is trying to extort money from them. He suggests that the entity that has benefitted the most should now foot the bill for what account holders owe.

"Send the damn bill to Siemens. They didn't ensure that the installation of this system and this product met the contract, and they should have to pay the bill," he said.

After Lumumba announced the City's lawsuit against Siemens, the company responded by email sent to the Jackson Free Press: "Siemens' work on the project has been validated by an independent, third-party review performed by West Monroe Partners, who was hired by the city of Jackson and performed its work under the city's direction. Siemens has gone above and beyond its contractual obligations to help address the city's well-known challenges, which are complex. While Siemens has not yet reviewed the complaint, it is disappointed the city has taken this action and will respond through the appropriate legal channels."

The Jackson Free Press reached out to Siemens to respond to Teeuwissen's statement, but did not hear back by press time.

On June 25, Lumumba responded to the water-customer lawsuit in a written statement, asserting that the City has maintained a process for addressing billing issues since the failed Siemens contract. He also called out Simon and Teeuwissen for their role in the Siemens contract.

"He (Teeuwissen) was a direct participant in the purchase of the system that he now claims has harmed his clients. His partner was also involved in the City's purchase of the Siemens contract, serving as counsel on the bond that was issued to pay Siemens $90 million for their work," he said.

Lumumba called their conduct "highly problematic," saying it will be challenged on all fronts. "The City intends to address all legal issues in court rather than in the media and the political arena, but it is important to me that the citizens understand that last week's lawsuit is unfounded."

Teeuwissen addressed this alleged conflict of interest at the forum.

A representative from Lumumba's office said he has no further comment on the matter.

Teeuwissen said he and his partner met with the current city attorney last week and told them he was willing to discuss anything he recalls from when the contract was signed.

"We think, my partner and I, the Siemens litigation is the appropriate strategy by the city," he said. "We want to support that. We hope what we do will help them make their case."