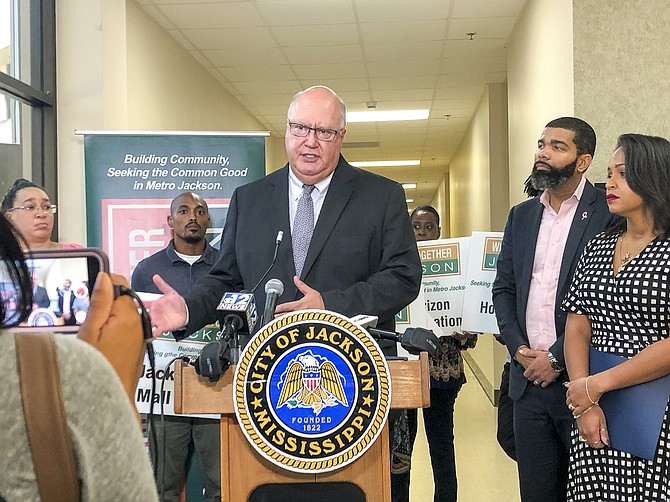 The City of Jackson unveiled a payment plan for residents with delinquent water bills Wednesday, part of its attempt to collect nearly $50 million in delinquent accounts. Bills went unpaid after a $90-million dollar contract with Siemens Inc. to replace Jackson’s water-billing system, signed in 2013, went awry. The system left many customers not billed or billed inaccurately for water and sewer for many months.

Residents who want to avoid water shut-off must enroll in one of the three payment-plan options, Mayor Chokwe A. Lumumba and Jackson Public Works Director Bob Miller explained after they announced the plan at the Water Sewer Business Administration in Jackson.

The terms and conditions of the payment plan depend on whether one rents or owns the property associated with the delinquent account as well as the assessed value of that property. The only available option to renters is to pay $75 per month of their backed-up bills until the debt is paid in full. Homeowners whose property is assessed at $130,000 or less are also required to pay $75, but owners whose homes are valued at more than $130,000 will be required to pay a quarter of their total debt—not to exceed $500—as well as monthly payments ranging anywhere from $75 to $150.

Residents with delinquent accounts who do not enroll in a plan to repay their debt will have their water shut off and be ineligible for service restoration until the debt balance is paid in full.

It is unclear so far whether additional fees or interest rates are associated with the payment plans, but residents do still need to pay their current bill along with the monthly payment-plan amount to be eligible for the plan, city officials said.

“Our effort is to create the most compassionate process that we can,” Lumumba said after unveiling the new plan, adding that the “new options that are now available to the customers is not a replacement of the customer bill of rights; it is a supplement of rights.”

In 2018, the mayor signed an executive order delaying water shut-off for Jacksonians with medical conditions who required access to water for a period of 60 days. Under the terms and conditions of the revised payment plan, those with medical problems have a one-year grace period before the City can shut off their water.

“We’ve also spoken about the necessity of enacting the full measure of our collection abilities so that the City of Jackson can avoid a much more dire and tragic circumstance of potential receivership of our water-sewer system,” the mayor said, emphasizing the administration’s attempt to balance citizens’ concerns with the City’s debt obligations.

During a Sept. 27 special meeting, the Jackson City Council rejected a $7-million emergency loan to help fund repairs to the City’s water-sewer system, after Ward 6 Councilman Aaron Banks voted against it. City council reconvened during its regular meeting this Tuesday, however, and voted to pass the emergency loan.

Public Works Director Miller told reporters that the City devised the payment plan with low-income residents in mind. “Folks on fixed income, folks on low-income consideration, all of them were factored in. What we also needed to do was make sure that we had a plan that was easy to explain and easy to be understood,” he said.

Miller also said that the City is less concerned about getting money quickly from “tens of thousands” of delinquent accounts than it is about ensuring that debt repayment can “be accomplished without causing undue hardship for citizens given all of the other considerations and financial responsibilities that they have.”

The mayor compared the water-sewer billing system to a “plane (that) from the very moment that it took off the ground was in disarray.” The City’s objective, he said, “is to fix the plane while we fly it at the same time.”

Lumumba also noted that state law prevents the City from forgiving debt. “In many ways, it would be a lot easier if the City of Jackson were able to clear a lot of that debt because receiving 50 percent of something is a lot better than receiving a hundred percent of nothing,” he said.

“I will repeat it: the City of Jackson got an absolutely raw deal when it comes to the Siemens contract. Not only did we pay three times as much as cities two times our size, for a water system, we got a water system that has so many issues with it that it would take a whole other press conference to speak to,” the Mayor said, adding that the City looks forward to its day in court. 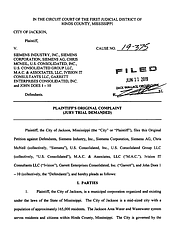 Last June, the City of Jackson announced a $225-million lawsuit against Siemens, as well as against local contractors and subcontractors, over contracted work it says was not done, or done poorly. Siemens has long maintained that it fulfilled its part of the contract it signed with the City of Jackson.

Payments customers make toward delinquent accounts will go into the City’s enterprise fund, which is used to finance repairs and maintenance of vital infrastructure, such as roads, as well as pay for its debt service.

Miller said customers do not have to disclose any reason for their failure to make payments, and that all that is required to sign up for a payment plan is an address and proof of home ownership or rental.

“We will work with you to make sure you have an affordable payment plan,” Miller said, but he warned that “if there is no engagement, that’s what turns into a turn-off.”

The City of Jackson worked with Working Together Jackson to devise a plan that helps both the residents and the needs of Jackson, a statement from that organization says. “As a result of our collaborative efforts with the Public Works Department, there are now multiple payment options available where before there was only one,” the organization said. “But more importantly, there are objective criteria so if you act in good faith you will not leave without being presented options to pay your bill in a way that works for both you and the City.”

Residents can sign up for a payment plan by visiting the Water Sewer Business Administration or calling 601-960-2000. Miller also encouraged people with concerns about inaccurate water bills and repayment difficulties to reach out.

UPDATE: An earlier version of this article stated that city council had rejected a $7-million loan to help fix the city's water-sewer system. Although they did reject the loan on Sept. 27, the council reconvened on Oct. 1 for its regular meeting and voted to pass the loan. The story has been updated to reflect this.