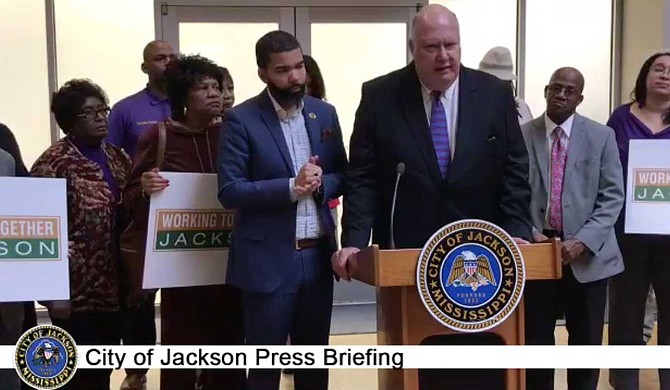 JACKSON — The City of Jackson's customer-focused process of offering payment plans to beleaguered Siemens Inc. customers since April has not yielded revenue at a quick enough rate to fill the massive $10 million to $20 million deficit due to kinks in the billing system.

As a remedy, the public works department began shutting off water to some delinquent customers in November, when the City sent warning letters to 782 households. Of those, the City remotely disconnected 44 percent of them, and by the end of last month, only 1 percent of customers had paid in full, and 17 percent are on payment plans.

These initial shutoffs led to just $178,581.54 in collections in November—less than 1 percent of the millions of dollars the City needs to stay afloat. Public Works Director Bob Miller said the people in this first wave of shutoffs did not make payments in 2017 or 2018.

"There's a lot of different things going on that might be a reason to be behind, that would represent a meaningful, significant and acceptable reason to be behind," Miller said at a municipal sales-tax meeting on Dec. 12. "Not making a payment in two years—I can't cover that one."

In a rough estimate, he found 20,000 customers in some form of delinquency of the 57,400 total Siemens customers. Back in the spring, Miller announced that around 23,000 customers had been "stranded in the system," meaning they did not get bills at all or the bills they received had been grossly incorrect. Miller said the City billed 21,600 people from May through October, but not every single one of those accounts has been delinquent—some have paid in full or are making incremental payments.

However, the system still is not totally smoothed out. Miller said that, in the process, more accounts have been stranded.

The public works director added that the City will dramatically ramp up disconnection efforts after the holidays, aiming for 200 disconnections a day over 100 business days to ultimately "touch every delinquent customer in five months," he said.

"Everyone gets delinquent at some point; they put a bill aside," Miller told the Jackson Free Press in an interview. "The most stringent part of our credit-collections practices focuses on the folks who have not made any payment at all."

Keeping with the pattern of the Lumumba administration's self-described "compassionate" approach to resolving the Siemens issue, the City of Jackson will host a two-day customer-service event for those with billing issues due to the notoriously haphazard Siemens system currently under repair.

Mayor Chokwe Antar Lumumba invites those who believe they have inaccurate bills or may not be able to afford their bills to go down to the media room in the Jackson Medical Mall (350 W. Woodrow Wilson Ave.) from 1 p.m. to 5 p.m. today, Dec. 14, or from 10 a.m. to 2 p.m. on Dec. 15. There, they will be able to engage with trained Working Together Jackson representatives, who will serve as a liaison to the City to settle customer accounts, correct errors, answer questions and offer payment options to residents.

Miller said he is excited about this experiment with Working Together Jackson, a coalition of community organizations in the Jackson area. Although he does not expect it to go perfectly, Miller does anticipate moving toward the ultimate goal: engaging customers to make sure they have water and the City has revenue.

The efforts at the Medical Mall this weekend represent the first satellite station for water billing assistance. The City will set up 10 more around Jackson through the end of March to quite literally meet customers where they are.

This effort follows the the City's water-and-sewer customer "Bill of Rights," which Lumumba signed in September. The document promises timely and accurate bills to customers, and promises that the City will correct errors. The administration also promises to refer struggling customers to programs that may be able to assist them in paying water and sewer bills.

Customers will have the right to appeal the City's written notice of a pending disconnection to the Office of the City Attorney. If customers lose that appeal, they may appeal again to the city council.

At the press conference, Mayor Lumumba did not want to harp on the rate of shutoffs, because he wants this process to encourage Jacksonians, he said.

"(It is) a process that allows them to rectify their bills .... [S]ometimes when we're facing a difficult challenge, we sometimes put our head in the sand," Lumumba said. "Neither one of us can afford to do that."