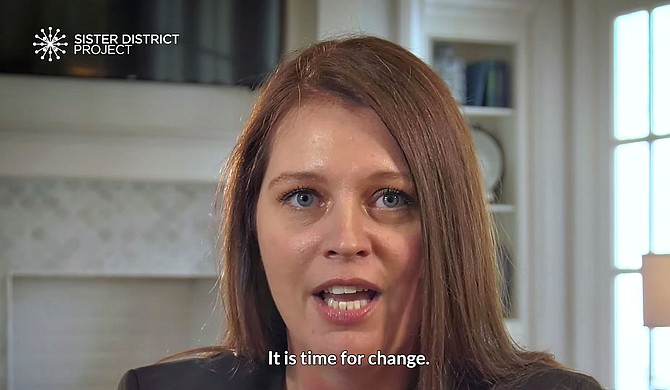 "This was a Trump district. Hillary got 44% in House District 64. This was not a traditionally blue district," Sister District co-founder and Political Director Gaby Goldstein told the Jackson Free Press on Tuesday.

Sister District, a non-profit group that focuses on helping Democrats win in state legislatures, also has an affiliated PAC in Mississippi that, as of Oct. 29, had raised $5,732.51 and spent $5,457.13.

Yates, who had never planned to run for office until Democratic leaders began urging her to enter the race about two weeks before the March filing deadline, told the Jackson Free Press that Sister District helped her with the technical "in the weeds stuff that I wouldn't have been able to handle on my own"—like field organizing, identifying likely supporters and tracking doorknocking. Their support, she said, was "huge."

Sister District also helped Yates by sending text messages to voters and knocking on doors, with Brandon Turner, the organization's head of campaigns, knocking on doors in Jackson through election night.

"Really, I think the key part of our grass-roots support for Shanda was strategic advice," Goldstein said. "We helped put together a campaign early on. ... I think Shanda's win is a tremendous bright spot for us. We believe no district is out of reach, and no state is out of reach. It's just a matter of providing inspiring candidates with resources they need."

'Dems Should Be Running Everywhere'

In 2015, Democrats did not even field a candidate to challenge Denny, the House Republican floor leader. Goldstein said she thinks there were probably other districts similar to House District 64 that Democrats should have challenged this year, too.

"I think there were other districts that had similar profiles, I would have to take a look at a tracker and get back to you on that. ... I think Democrats should have run in '15, and Dems should be running everywhere."

She stressed that Sister District's aim is to provide help where it's wanted, and that "folks in Mississippi are better placed to talk about the challenges with the state party and the infrastructure that exists or needs some bolstering."

Goldstein said Sister District began as a recognition that "Democrats have really overlooked state legislatures as a venue of power across the country for many decades, and Republicans have not."

She said focusing on winning state legislative races, like in House District 64, is vital for Democrats—especially as Republicans consolidate control of the federal courts, including the U.S. Supreme Court, with Trump appointees.

The federal courts have long blocked or overturned efforts by politicians in conservative and southern states to curtail the rights of women, people of color and LGBT people. With Trump appointees like Brett Kavanaugh and Neil Gorsuch, though, that guarantee no longer exists. Kavanaugh replaced Justice Anthony Kennedy, a swing justice who often joined Republicans in conservative opinions, but repeatedly sided with liberals on issues like abortion and LGBT rights.

'Testing the Limits of Roe'

After the Mississippi Legislature passed a six-week abortion ban earlier this year, one of its sponsors, Sen. Joey Fillingane, R-Sumrall, told the Jackson Free Press that he and other conservative lawmakers hope it will trigger a "test case" at the U.S. Supreme Court that could result in the overturn of Roe v. Wade—the 1973 ruling that declared women have the right to make decisions about whether or not to have an abortion.

"With a fifth conservative taking the seat of Justice Kennedy, who was considered a moderate on the court, I think a lot of people thought, finally, we have five conservative justices, and so now would be a good time to start testing the limits of Roe," Fillingane said.

The changes on the court mean state offices matter a lot, Goldstein said, though she did not mention abortion cases.

"In many areas of policy, the federal government is not going to come in on a white horse," Goldstein said. "It's really going to be up to state power and building Democratic power to secure those rights in the states."

Goldstein and her co-founders, Rita Bosworth, Lyzz Schwegler and Lala Wu launched Sister District 10 days after the 2016 election. They now have about 45,000 volunteers across the country, she said. This year, Sister District also helped Democrats challenge Republicans in Louisiana, Pennsylvania and Virginia.

'It Can Happen in Mississippi'

In Virginia, seven Sister District-backed candidates won, helping flip that state's House of Delegates and Senate from Republican control to Democratic control. When Virginia last held elections for its general assembly, in 2017, 14 Sister District-backed candidates won, including Danica Roem, the first openly transgender person to ever win a seat in any U.S. statehouse.

Since Mississippi's last state legislative races happened in 2015, this is the first year the group put resources into the state. Two other candidates they backed, Brandon Rue in House District 102 and Aisha Sanders in House District 96, lost their races. Rue lost to incumbent Republican Missy McGee, while Sanders lost to conservative independent incumbent Angela Cockerham. Still, Sister District plans to come back when legislative seats are up again in 2023.

"Shanda is an inspiring candidate who was willing to put in the work and run a great race. And her win shows that we can and should be investing in districts that may not at first blush look like a Democrat could succeed," Goldstein said.

"And it can happen in Mississippi. It can happen anywhere where Democrats are willing to field great candidates and, really importantly, provide support. It's not enough to encourage someone to run. We have to step up and help them out. Provide money, field support, and strategic advice so they can actually do what they need to do to help voters."