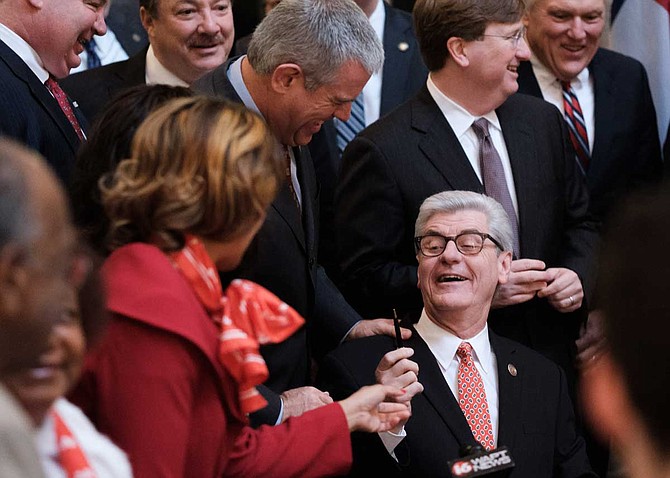 Surrounded by proud lawmakers, Mississippi Gov. Phil Bryant holds up a pen he used to sign the Mississippi Broadband Enabling Act in the State Capitol rotunda on Jan. 30, 2019. Photo by Ashton Pittman.

JACKSON — Mississippi Gov. Phil Bryant signed the Mississippi Broadband Enabling Act into law Wednesday morning surrounded by a bipartisan group of beaming legislators. The new law seeks to address the lack of access to high-speed broadband internet that plagues Mississippians in many rural parts of the state.

It allows the state's 25 electric cooperatives to offer rural broadband internet to their customers. Those cooperatives, all under the umbrella of the Electric Cooperatives of Mississippi organization, serve about 1.8 million Mississippians.

Just before signing the bill, also known as House Bill 366, Bryant praised it as "an example of what we can do when we work together."

Lawmakers passed the bill unanimously in the Senate last week, after passing with just three nay votes in the House of Representatives. Speaker Philip Gunn crafted the legislation with the help of proponents.

Under the law, cooperatives are not required to offer broadband and can establish or allow a separate broadband provider to use their systems to provide service. The cooperatives can invest or use loans to cover the startup costs necessary to provide broadband, but cannot use electric sales revenue to subsidize it.

The law also prohibits electric cooperatives from requiring customers to purchase high-speed internet, and cooperatives are not allowed to disconnect electric service for customers who lapse on paying their internet bills.

In an editorial for the Columbian Progress last week, Rep. Ken Morgan, R-Morgantown, wrote that he knows "rural broadband is a long-term project."

"I hope that the truly rural areas are the ones that benefit from this legislation—not simply the high-density suburban areas that classify as 'rural' but could already attract a provider to invest in that market," wrote the lawmaker, whose district includes rural parts of Marion and Lamar counties where broadband access is limited.

It could still be years before rural Mississippians see the benefit from the bill. The law appropriates no state funds for broadband infrastructure projects, but most electric cooperatives in the state are already applying for federal funds to begin broadband projects.

The U.S. Department of Agriculture launched a program in December to offer $600 million in loans and grants to rural areas for investment in broadband infrastructure. The state's rural electric cooperatives, as well as existing internet service providers and cities and towns are all eligible to apply.

"High-speed internet e-Connectivity is a necessity, not an amenity, vital for quality of life and economic opportunity, so we hope that today rural communities kick off their rural broadband project planning," Agriculture Secretary Sonny Perdue said said in a Dec. 13 statement. "Under the leadership of President Trump, USDA has worked to understand the true needs of rural communities facing this challenge so we can be strong partners to create high-speed, reliable broadband e-Connectivity."

The funds are for projects aimed at serving fewer than 20,000 people who live in areas either with no broadband service or with services that have download speeds slower than 10 megabits per second and slower than 1 mbps for uploads. Projects created with the USDA funds are required to implement speeds of at least 25 mbps download and 3 mbps upload.

A 2018 study by BroadbandNow.com found that Mississippi ranks No. 49 in a list of states with the best internet coverage, ahead of only Montana. Broadband is unavailable to about 30 percent of the state.

Mississippi's internet speeds were among the slowest in the country, with an average of just 25.2 mbps. In Louisiana, the average is 35.1 mbps and 33.7 mbps for Alabama.