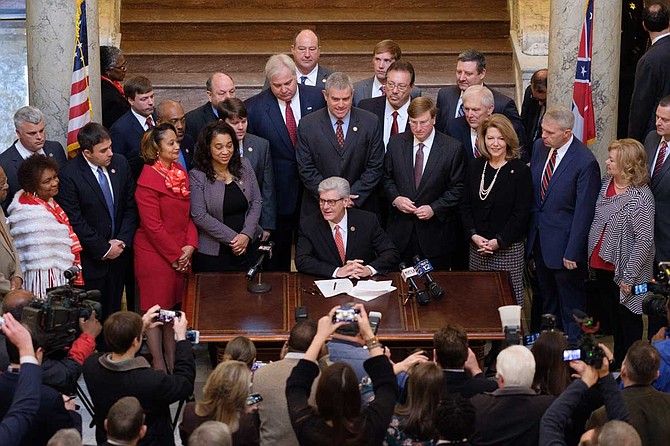 JACKSON — Dozens of beaming legislators stood around Gov. Phil Bryant in the Mississippi Capitol rotunda. With a stroke of his pen on Jan. 30, he signed into law the first major piece of legislation of the 2019 legislative session: the Mississippi Broadband Enabling Act, which is designed to expand high-speed internet access to rural parts of the state.

The act allows the state's 25 electric cooperatives to offer rural broadband internet to their customers. Those cooperatives, all under the umbrella of the Electric Cooperatives of Mississippi organization, serve about 1.8 million Mississippians.

In an editorial for the Columbian Progress ahead of the bill's passage, Rep. Ken Morgan, R-Morgantown, wrote that "rural broadband is a long-term project."

"I hope that the truly rural areas are the ones that benefit from this legislation—not simply the high-density suburban areas that classify as 'rural' but could already attract a provider to invest in that market," wrote the lawmaker, whose district includes rural parts of Marion and Lamar counties where broadband access is limited.

It could still be years before rural Mississippians see the benefit from the bill. The law appropriates no funds for broadband infrastructure projects, but most electric  cooperatives in the state are already applying for federal funds to begin projects.

The U.S. Department of Agriculture launched a program in December to offer $600 million in loans and grants to rural areas for investment in broadband infrastructure. The state's rural electric cooperatives, as well as existing internet service providers and cities and towns are all eligible to apply.

The funds are for projects aimed at serving fewer than 20,000 people who live in areas either with no broadband service or with services that have download speeds slower than 10 megabits per second and slower than 1 mbps for uploads. Projects created with the USDA funds are required to implement speeds of at least 25 mbps download and 3 mbps upload.

A 2018 study by BroadbandNow.com found that Mississippi ranks No. 49 in a list of states with the best internet coverage, ahead of only Montana. Broadband is unavailable to about 30 percent of the state. Mississippi's internet speeds were among the slowest in the country, with an average of just 25.2 mbps. In Louisiana, the average is 35.1 mbps and 33.7 mbps for Alabama.

On Jan. 31, legislators in the  Mississippi House Education Committee advanced to the House floor a bill designed to help prepare schools for the worst: the possibility of gun violence.

It would require school districts to devise and conduct active-shooter drills within the first two months of each semester. All school-district employees would be required to attend civilian response and active-shooter training. Every two years, school employees would also attend training courses in mental health.

House Bill 1283 would also "expand student access to mental health resources" and develop ties between school districts and community-health facilities for referrals, school-personnel training, and behavioral-health screenings for students at risk for harm or showing signs of mental or emotional distress.

Under the proposed act, the Mississippi Analysis and Information Center, which is housed in the Mississippi Office of Homeland Security, "shall employ three regional analysts dedicated to analyzing and resolving potential threats identified by the agency's statewide social media intelligence platform and the dissemination of school safety information."

Though she supports the mental-health reforms the bill would bring, Lori Gregory, a Jackson-based public-education advocate, told the Jackson Free Press on Monday that she is concerned about the social-media component of the bill.  "I'm worried about monitoring students social-media accounts because if you aren't culturally and generationally fluent in those kids' social media languages, you may assign value to a post that has no real threat or meaning," she said. "So I think one has to be especially careful there."

On Jan. 22, the House passed House Bill 571, which clarifies Mississippi's sex-trafficking laws to make it clear that no one under age 18 can be charged with prostitution. The bill would provide additional emotional and mental support to help victims of child sex exploitation. The bill now goes to the Senate for consideration.

In a Jan. 24 letter to House Speaker Philip Gunn, who spearheaded the bill, and Lt. Gov. Tate Reeves, Bryant praised the bill. "Human trafficking is one of the fastest growing criminal industries in the world, and it affects every country and state in the world," Bryant wrote.   "Mississippi is no exception. Speaker Gunn's bill is exemplary and takes needed measures to strengthen Mississippi laws in order to better protect children who have been subjected to this heinous crime."

One bill, House Bill 1176, targets transgender school children. It provides "protection from suspension or termination" for teachers who refuse "to refer to students" by their gender identity "if different from biological assignment at birth." The bill is the first of its kind in the country.

"Letting teachers or other public school staff call transgender students by the incorrect names or pronouns isn't a matter of freedom or public debate," the ACLU of Mississippi tweeted on Feb. 4. "This bill is government-authorized bullying of vulnerable young people. NO HB1176!"

Transgender teens are already some of the most vulnerable in the country. Last year, a study from the American Academy of Pediatrics found 50.8 percent of female to male teens reported having attempted suicide, 29.9 percent of male to female teens, and 41.8 percent of those who did not identify exclusively with either gender.

Senators on Tuesday advanced Senate Bill 2116, which would "prohibit an abortion of an unborn human individual with a detectable fetal heartbeat except when a medical emergency necessitates." Per the American Pregnancy Association, fetal heartbeats may be detectable around six weeks gestation.

"SB 2116 would essentially act as a de facto ban on abortion. Many, if not most, people don't know they are pregnant at 6 weeks," Planned Parenthood Southeast Director Felicia Brown Williams tweeted Tuesday. "The Mississippi Legislature knows this is unconstitutional, and simply does not care. This is an insult to Mississippians and to this country."

Last year, lawmakers passed a law banning abortion after 15 weeks, even though the state's only abortion clinic does not perform abortions after 14 weeks. A federal judge struck that bill down.

"Again and again, we've been told that we should pass legislation, and again and again, it's been found unconstitutional," Sen. David Blount, D-Jackson, complained to committee members during debate on the fetal heartbeat bill.

Nancy Loome, executive director of the Parents’ Campaign, cited a “lack of accountability” for the ESA program in a Feb. 2 tweet. “Yet voucher lobbyists want more state funding?” she wrote.

At the Capitol on Jan. 30, members of the Mississippi Immigrants Rights Alliance called on legislators to pass legislation aimed at making life easier for immigrants—documented and undocumented.

House Bill 403 would make it easier for immigrants to obtain a driver's license by revising those requirements and creating a certificate for driving. MIRA representatives met with lawmakers to push them to support that bill, as well as others designed to help immigrants obtain and keep employment in the state.

Lawmakers discussed several criminal-justice reform bills. House Bill 1352 would steer criminal courts away from acting as the venue where the mentally ill are adjudicated. It would also cut back on drivers' license suspensions.

Senate Bill 2927, The Second Chances, Back to Work Act, though, would do even more to help people avoid being tagged as criminals for life. It would cut probation or parole supervisory times from five years to just two; nix extended sentences for three-strike offenses for those who combined sentence total more than ten years; and first and second felony drug possession charges would be downgraded to misdemeanors.

Like the House bill, it, too, would seek to steer the mentally ill away from criminal-court proceedings.

Two other bills, House Bill 949 and House Bill 1081, would reform the use of bail money. "Those who can afford bail walk free, while those who cannot languish in jail pending trial even when they do not pose any danger or risk of flight," wrote Tiffany M. Graves on Twitter on Feb. 4.

"It's time to end the money bail system in Mississippi."