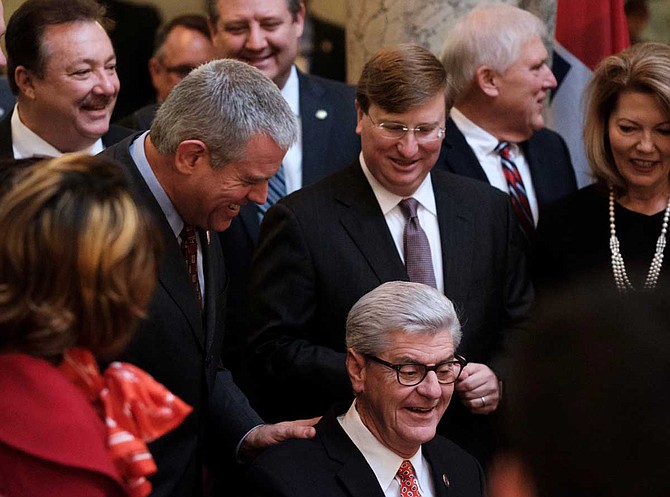 JACKSON — When Mississippi House Speaker Philip Gunn began looking at ways to solve the lack of high-speed broadband access that plagues much of rural Mississippi last summer, he turned to utility companies to understand the problem. A big issue for any utility company, broadband or not, he learned, is the cost of running new lines to rural areas.

"An employee told me he was assigned a task by a boss one day to figure out how much it was going to cost to provide service to six houses down the road," the Republican House leader recalled at the Stennis Institute luncheon in Jackson on Monday.

Solving the problem was not easy, he said, because it pitted the state-funded electrical cooperatives against cable and telephone companies.

"I decided I cannot figure this out, so I got everyone in the room," he said Monday.

With Gunn's support, the Legislature passed and Gov. Phil Bryant signed a law in January that aims to solve the problem.

The Mississippi Broadband Enabling Act permits Mississippi's 25 electric cooperatives, also known as ECMs, to offer high-speed service to their rural customers—many of whom currently lack access to broadband internet. An electric cooperative is a nonprofit utility business voluntarily owned by the people to whom it provides service. Examples of such businesses in Mississippi include the Yazoo Valley Electric Power Association and the Northcentral Electric Power Association. It could be years before rural Mississippians see the benefits, though.

"This bill was passed early in the session, we passed it the first week, the Senate passed it the next week, the Governor signed it and promised everybody they would have broadband by Monday morning—which we both know was not going to happen," Gunn said on Monday.

Mississippi currently "ranks 49th in the United States of America when it comes to connectivity to the Internet and the outside world," Brandon Presley, the chairman of the Mississippi Public Service Commission and the MPS commissioner for the Northern District, told the Jackson Free Press on Jan. 30. However, Mississippi actually ranks 46th in this category.

Presley, a Democrat, has worked with a variety of internet service providers in the past to address this issue, encouraging entities such as CSpire and AT&T to invest in rural communities that need better connectivity.

Prior to the passage of the law, Presley arranged an $11-million partnership between CSpire and Entergy to build a fiber infrastructure that will span more than 300 miles into rural communities across the state, providing broadband to about 30,000 Mississippians.

While crafting the legislation, Gunn and other legislative leaders worked with the cooperatives and utility companies involved to address their concerns. Private for-profit companies feared that the cooperatives, which are state subsidized nonprofits, would gain an unfair advantage. They were also concerned that cooperatives, who own telephone poles in the areas where they provide service, might charge exorbitant fees to use them—and there are about 14 poles per mile.

Gunn said they tried to address those concerns but may have fallen short.

The law allows the cooperatives to partner with broadband companies like Comcast or CSpire to provide service. It bars them from charging non-affiliated companies higher fees to use their telephone poles, though.

That may explain why lawmakers were so determined to do something; however, major concerns related to the cost, legality and timeframe of the law's implementation persist. Although the law passed with unanimous support in the Senate, there was dissent in the House. The legislation passed 115-3 in the House, with three vacancies and one absence. The three Representatives who voted "nay" include Dana Criswell, R-Pascagoula, Joel Bomgar, R-Madison, and Ashley Henley, R-Desoto.

On Feb. 1, Criswell told the Jackson Free Press that he did not make his decision out of a lack of care for the people who don't have broadband, but rather after observing what he considers the law's faults.

"There was a couple of things I thought just were not quite right with the bill," he said. "One, it is an extremely expensive proposition to get into this broadband, and of all of the co-ops, there was only two who even say they're going to explore this possibility," he said, referring to the possibility of expansion into rural areas. "... We're talking hundreds of millions of dollars for a co-op (electric cooperative) to get into the broadband business."

"It's not solving the problem. ... I listened to the co-ops and came to some of the hearings. They were not sure how they were going to handle this. They were not quite ready for this."

One of the two co-ops Criswell mentioned include the North Central Cooperative in Olive Branch, Miss., which he states primarily provides service in urban areas and could afford to provide similar service in more rural areas. The primary responsibility of the co-ops is the simple task of providing electricity to support rural areas, which the government has allowed them to do since the 1930s.

However, Criswell said he fears that if they suddenly move into the broadband business, "they're going to come back to the state in a few years, and they're going to say, 'That was a failure,'" and end up in debt.

The conservative Mississippi Center for Public Policy released a statement in January expressing its concern that federal subsidies and taxpayer dollars could eventually be required to bail out some cooperatives if they go into the broadband business and fail.

That is nonsense, Presley told the JFP. It "demonstrates a complete lack of knowledge of what a rural electric cooperative is" because they are not under the jurisdiction of a government entity.

"That criticism is foundationally false," he said.

The funds needed to build infrastructure in rural communities is entirely up to the discretion of a particular electric cooperative, as the consumers who pay for their services support the co-ops.

On Feb. 1, Henley told the Jackson Free Press that she thinks it could be a decade before rural Mississippians can high-speed broadband access under the law. Much of that will depend on relationships the cooperatives develop with for-profit affiliates, and on their ability to procure federal grant funds.

The law appropriates no state funds for broadband infrastructure projects, but most electric cooperatives in the state are already applying for federal funds to begin projects. The U.S. Department of Agriculture launched a program in December to offer $600 million in loans and grants to rural areas for investment in broadband infrastructure. The state's rural electric cooperatives, as well as existing internet service providers and cities and towns are all eligible to apply.

In 2011, Mississippi became the 44th state to prohibit the abuse of eminent domain. Voters passed the amendment with a sweeping 73 percent majority, clearly indicating support for the protection of privately owned property in Mississippi. However, things such as roads, bridges, levee and drainage facilities, airports, utilities and other public assets were exempt from these prohibitions.

The law does not force cooperatives to provide broadband service, nor does it require consumers to purchase high-speed internet.

On Monday, Gunn said one of the biggest concerns he heard from utility customers was that their utility costs could rise. But under the law, cooperatives cannot charge electric customers a higher fee to raise revenue to support broadband projects, nor can they require customers to pay for broadband service.

"We made sure that was protected against," Gunn said Monday.

The law also does not force cooperatives to provide broadband service.

James Bell is an intern reporter for the JFP and a sophomore at Millsaps College. He aspires to become a political reporter after graduation. Ashton Pittman and Amber Helsel contributed to this story.