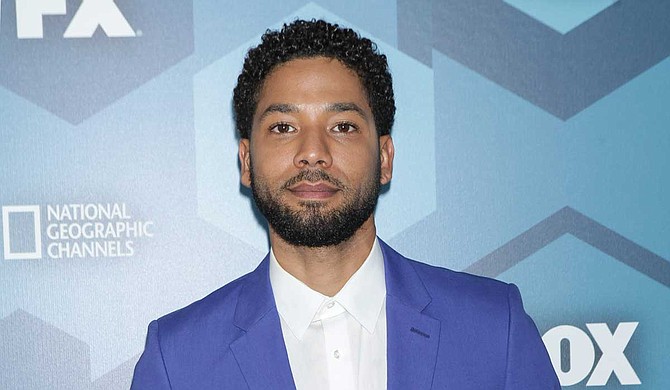 JACKSON — Mississippi celebrities are speaking out after a racist, homophobic attack on "Empire" actor Jussie Smollett that Chicago police describe as a "possible hate crime."

Smollett told investigators he was leaving a Chicago Subway at 2 a.m. Tuesday when two white suspects, wearing ski masks, shouted racist and homophobic slurs at him. They then hit him in the face, poured a "chemical substance" on him and wrapped a rope around his neck, the police report reads.

The alleged assailants, Smollett told police, shouted, "This is MAGA country!" at one point. "MAGA" is a reference to President Trump's slogan, "Make America Great Again." Trump Tower Chicago is just blocks away from the site of the alleged attack.

The actor said the assailants fled, at which point he went to a nearby hospital. In a statement Tuesday, police said they were "currently working to gather video, identify potential witnesses and establish an investigative timeline."

"This is sickening," former N'Sync star Lance Bass, a Clinton, Miss., native, wrote on Facebook as the news broke Tuesday.

"I think it's safe to assume it's a hate crime," N'Sync member and Clinton, Miss. native Lance Bass wrote after Jussie Smollet's attack.

"And I love that they have to use 'possible,'" Bass added, in a comment on his own post. "The MAGA men were heard saying 'aren't you that f-ggot n-gger on Empire?' Yea. I thinks it's safe to assume it's a hate crime."

Several years ago, Lance Bass' mother wrote a letter to her Southern Baptist church about being the mother of a gay son. That letter went viral. In 2014, Bass also campaigned against SB 2681, one of Mississippi's "religious freedom" laws that enshrined a right for businesses in the state to discriminate against LGBT people.

"Jesus," she wrote in one tweet, adding in another: "I love you @JussieSmollett."

Thomas, a black woman, wrote The New York Times best-seller "The Hate U Give," a story about racism and police brutality. She also retweeted another user, who wrote that the attack on Smollett shows why people don't find "1993 style homophobic jokes funny anymore." That tweet specifically called out Kevin Hart, who lost his Oscars hosting gig after old anti-gay jokes surfaced.

Blossom Chrishelle Brown, a transgender actress and producer from Greenwood, Miss., also weighed in. "Sending out thoughts and prayers to the amazing Jussie Smollett as he was a victim of a hate crime as he was attacked by two homophobic individuals," Brown wrote.

Brown appeared in the first season of "I Am Cait," the now-cancelled 2015 show about Caitlyn Jenner.

Hate crimes also increased from 2015 to 2016, and spiked in the month after Trump's election.

NAACP President Derrick Johnson, who previously served as president of the organization's Mississippi branch, wrote that the rise in hate crimes is "directly linked" to Trump.

"The recent racist and homophobic attack on acclaimed actor and activist Jussie Smollett is troubling," Johnson wrote. "The rise in hate crimes is directly linked to President Donald J. Trump's racist and xenophobic rhetoric. It is dangerous for any society to allow a tone of divisiveness and hatred to dominate the political discourse.

"As this rhetoric continues to bleed into our everyday lives, dangerous behavior will continue to place many law-abiding individuals at risk. We pray for a full physical and mental recovery for Jussie Smollett and many unnamed victims of this forum of hate based terrorism."

"The vicious attack on actor Jussie Smollett was an attempted modern-day lynching," Booker tweeted. "I'm glad he's safe. To those in Congress who don't feel the urgency to pass our Anti-Lynching bill designating lynching as a federal hate crime - I urge you to pay attention."

Booker, a likely 2020 candidate for president, visited Mississippi last July and November to support Mississippi Democrat Mike Espy's bid for U.S. Senate. Espy lost the race to incumbent Republican Sen. Cindy Hyde-Smith, whose campaign struggled after she made a joke about "public hangings"—in the state that historically had the most lynchings of black men after the Civil War.

To those in Congress who don't feel the urgency to pass our Anti-Lynching bill designating lynching as a federal hate crime– I urge you to pay attention. https://t.co/EwXFxl5f2m

Congress has attempted to pass anti-lynching legislation more than 200 times over many decades. Several times, anti-lynching bills passed the House, only for southern senators to block them.

This time, though, the Senate finally made history and passed an anti-lynching bill. "It is my true honor to be with you on the floor of the United States Senate," Harris, now a presidential candidate, told Hyde-Smith who presided over the vote.

"The ayes do have it," Hyde-Smith said later, and the body unanimously passed the bill.

U.S. House a Holdout on Anti-Lynching Bill, So Far

This time, though, it was the House that did not reciprocate. The government shut down two days later on Dec. 22, and the House—still under the leadership of former Republican House Speaker Paul Ryan—did not take the bill up before the new Congress was sworn in earlier this month.

The bill the Senate passed last year would have covered not only race, but "offenses involving actual or perceived religion, national origin, gender, sexual orientation, gender identity or disability."

The evangelical Liberty Counsel, though, which has influence in the Republican Party, is demanding that protections for LGBT people be stripped from future versions of the bill.

"The old saying is once that camel gets the nose in the tent, you can't stop them from coming the rest of the way in," conservative Liberty Counsel chairman Mat Staver told Christian news outlet OneNewsNow earlier this month. "And this would be the first time that you would have in federal law mentioning gender identity and sexual orientation as part of this anti-lynching bill."

"So far they've been unsuccessful over the many years in the past," Staver continued, referring to legislators' attempts to pass LGBT non-discrimination laws—like the failed Employment Non-Discrimination Act—in the past. "But this is a way to slip it in under a so-called anti-lynching bill, and to then to sort of circle the wagon and then go for the (jugular) at some time in the future."

Transgender Hate Crimes on the Rise

Transgender activists tracked the deaths of at least 55 transgender people in the United States caused by violence in 2017 and 2018, including two black trans women in Mississippi. Mesha Caldwell was found shot to death near Canton, Miss., in January 2017, and Diamond Stevens shot to death in Meridian, Miss., this June. Both cases were ruled homicides but remain unsolved.

In 2017, former Navy sailor Dwanya Hickerson pled guilty to the second-degree murder and robbery of transgender nurse Dee Whigham of Hattiesburg, Miss., whom Hickerson admitted to stabbing 190 times in a St. Martin, Miss., hotel room in July 2016. As part of a plea deal, Hickerson was sentenced to 35 years for Whigham's murder, followed by eight years for robbery.

Hickerson told police he was on a date with Whigham and had just had sex with her when she revealed she was transgender. He said he "lost it."

While Mississippi is known for having the most lynchings of any state in the 85 years from 1882 to 1968, it is also the home of the first two African Americans to serve in the U.S. Senate in history: Hiram Revels became the first in 1870, and Blanche K. Bruce the second in 1875. But no African American has been elected to statewide office since Reconstruction ended.