Mississippi May Mandate Ten Commandments and Pledges to State, U.S. Flags in Schools 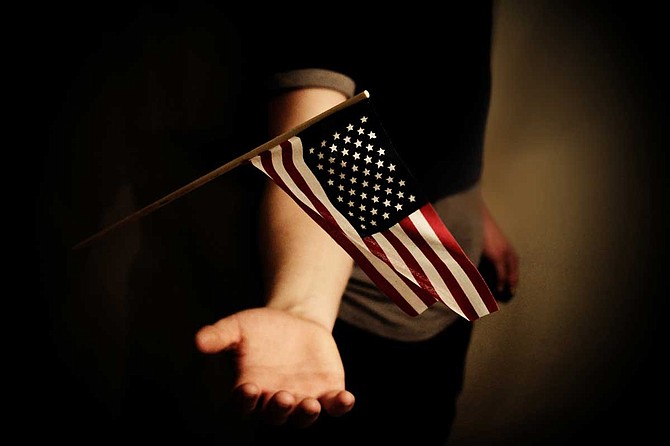 JACKSON — Mississippi law would require schoolchildren to recite the Pledge of Allegiance and see the Ten Commandments be displayed on public-school walls under new bills in the Legislature this session, requirements that may violate the Establishment Clause of the First Amendment. One would also require Mississippi teachers to teach Mississippi's pledge glorifying the state flag, which contains the Confederate battle emblem in its canton.

State Rep. Credell Calhoun, D-Jackson, introduced House Bill 427, which would amend the Mississippi Constitution to mandate that public-school teachers and principals must display the Ten Commandments. It would require that school officials display the religious laws "on an appropriately framed background with minimum dimensions" of 11x14 inches in all classrooms, auditoriums, and cafeterias, alongside the motto, "In God We Trust."

Students would have to recite all 10 commandments within the first hour of class each morning. Any teacher or student who objects to reciting it would be excused "without penalty" from reciting the pledge.

Calhoun is a Missionary Baptist who sits on the House Education Committee. He introduced a similar bill last year, but it died in committee.

In 1980, the U.S. Supreme Court found that a Kentucky state law requiring public schools post the Ten Commandments in classrooms violated the Constitution's Establishment Clause and "served no secular purpose." Calhoun's bill goes further than that law by also requiring teachers to lead students in reciting it.

While Calhoun's bill does not suggest a fine for non-compliance, another a bill authored by State Rep. William Shirley, R-Quitman, would impose a fine.

Shirley's bill, House Bill 172, would impose $1,500 fines on schools for instances in which they do not require teachers to have their classrooms recite the Pledge of Allegiance within the first hour of class.

Like Calhoun's bill, Shirley's bill allows for students who object to excuse themselves from reciting the pledge.

'No Official, High or Petty, Can Prescribe What Shall Be Orthodox'

In 1946, the U.S. Supreme Court ruled that students cannot be forced to recite the pledge, after a West Virginia school expelled some students who were Jehovah's Witnesses for refusing to pledge due to religious objections.

In that opinion, the nation's highest court wrote that "no official, high or petty, can prescribe what shall be orthodox in politics, nationalism, religion, or other matters of opinion or force citizens to confess by word or act their faith therein."

Such laws, it found, violate the First Amendment's free speech and religious freedom rights, as well as the Fourteenth Amendment's Due Process clause.

Shirley's Pledge of Allegiance bill would require that fines for non-compliant schools be paid "by the local school district, from funds other than federal funds, Mississippi Adequate Education Program funds, or any other state funds" within 30 days.

'I Salute the Flag of Mississippi'

The bill also makes it mandatory for teachers to teach students the pledge of the state of Mississippi, which reads: "I salute the flag of Mississippi and the sovereign state for which it stands with pride in her history and achievements and with confidence in her future under the guidance of Almighty God."

Shirley lists his faith as Baptist on his official legislative biography.

Both bills now go to the Education Committee, where Calhoun is a chairman with no date set for potential votes.

Lawsuits and legal controversies surrounding the pledge and the Ten Commandments in public buildings have been common in recent decades, as evangelical Christians sought to extend their influence in government.

In 2003, the Alabama Court of the Judiciary removed then- Alabama Supreme Court Chief Justice Roy Moore from his position after he refused a federal court order to a remove a statue of the Commandments in a state court building.

Voters sent Moore back to the state's Supreme Court in 2012, but the Court of the Judiciary suspended him in 2016 for refusing to uphold the Supreme Court's order on same-sex marriage. He resigned in 2017 to run for the U.S. Senate Jeff Sessions vacated after President Trump nominated him for attorney general.

Moore became the Republican nominee, but lost his bid to Democrat Doug Jones after multiple women came forward alleging he committed sexually predatory behavior when they were minors.