A Bridge Too Far: ‘No’ to Medicaid Expansion | Jackson Free Press | Jackson, MS

A Bridge Too Far: ‘No’ to Medicaid Expansion 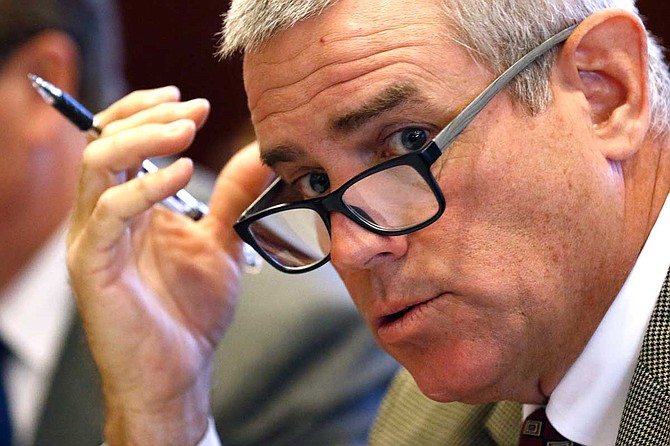 JACKSON — Half a century ago this year, a fist-fight broke out on the floor of the Mississippi House of Representatives. Fed up with formal debate, Rep. Jerry Wilburn of Mantachie and Rep. Rab Sanderson of Waynesboro cast aside Robert's Rules of Order and traded blows. Their quarrel moved from the House Chamber to the House cloakroom, and finally to the House cloakroom floor.

When others finally broke the fight up, Wilburn was bleeding near one eye, and Sanderson had knots on his head.

It was early October 1969, and legislators had been contending with two controversial bills. One of the bills sought to implement tax credits to aid private segregation academies that sprang up after courts ordered the desegregation of public schools; the other approved a state Medicaid program and accepted federal funds. Wilburn and Sanderson were fighting over the details of the latter bill.

With the threat of losing millions in federal funding, the Legislature ultimately passed the Medicaid bill that year, and more than 200,000 residents gained coverage. Mississippi was the next-to-last state to implement the program.

As the 2019 legislative session heats up, state legislators are again tussling over the Medicaid program and whether or not to accept federal funds that could expand coverage to as many as 300,000 Mississippians. Conservative Sen. Chris McDaniel, R-Ellisville, and conservative Rep. Robert Foster, R-Hernando, who is running for governor, quarrelled over the topic last week, albeit via a more modern medium.

"It's impossible to be a leader if all you ever do is oppose everything and never offer real solutions to our problems," Foster shot back that same day.

Accepting the expansion would not only cover more, mostly working Mississippians, but it would help save rural hospitals that have struggled to stay solvent since Gov. Phil Bryant rejected expansion in 2013.

Reports surfaced in December indicating some Republicans, including Bryant, were looking at ways to finally expand. Expanding Medicaid now could take away a talking point from Democratic candidate for governor Jim Hood, the current attorney general and a supporter of expansion. Political observers expect he will face Lt. Gov. Tate Reeves, the likely Republican nominee for governor, in November's election.

In sharing his contemporary concerns about "Obamacare," McDaniel has also raised the spectre of socialism. For Reeves, whose role as head of the Mississippi Senate means he sets the policy agenda, Medicaid expansion appears to be a bridge too far.

And so, Reeves made the biggest news of the first two weeks of the legislative session when he made clear last week that he has no intention of joining other Republicans, like Foster and Secretary of State Delbert Hosemann, in considering expansion.

With that statement, the chances of Mississippi joining the 37 other states who have expanded Medicaid, like Louisiana, this year narrowed. Despite some hopes, Bryant did not bring up the topic in his final State of the State address last Tuesday.   For now, Medicaid expansion looks like it will be an election issue in 2019—not a legislative one.

While legislators introduced hundreds of bills, little activity took place on the floor of either chamber during the first two weeks of the legislative session.   Aside from resolutions, the House passed just one bill.

Representatives voted 115-3 for HB 366, known as the Mississippi Broadband Enabling Act. It would allow Mississippi's 26 not-for-profit electric cooperatives to offer high-speed, broadband internet to their combined 1.8 million electrical customers across the state.

State Public Service Commission Chairman Brandon Presley backs the measure, which could help rural Mississippians whose internet options remain limited to dialup and satellite internet. But the conservative Mississippi Center for Public Policy warned that the bill, authored by Republican House Speaker Philip Gunn, could result in high costs for customers getting broadband through EPAs.

"It seems inevitable that this plan will open the door for a ratepayer and state taxpayer bailout," the Center's Brett Kittredge wrote at mspolicy.org.

That bill now goes to the Senate.

In his State of the State Address, Bryant urged lawmakers to pass legislation to raise pay for teachers and to implement foster-care reforms. Those bills will likely come up for a vote later this session.

While leaders have not scheduled votes, lawmakers did introduce a heft of other bills this session. One implements fines on public schools that do not recite the Pledge of Allegiance in the first hour, while another requires recitation of the Ten Commandments.