What Mississippi's Lawmakers Are Proposing for Education 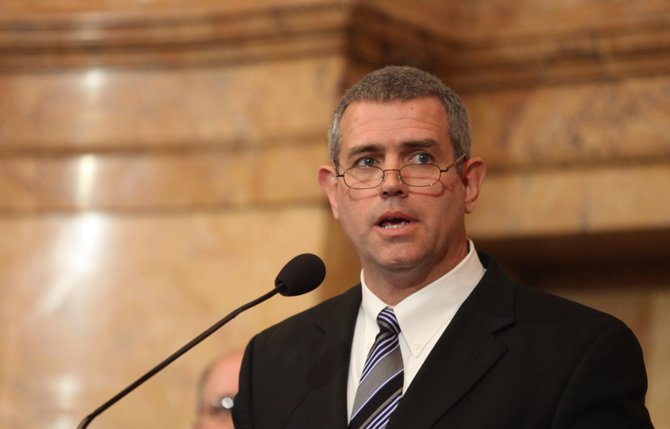 Lawmakers like Speaker Philip Gunn have proposed more than 200 education laws for the 2014 session, in what is poised to be the second consecutive legislative session with a heavy focus on schools. Photo by Amile Wilson

JACKSON, Miss.—Lawmakers in Mississippi have proposed more than 200 education laws for the 2014 session, in what is poised to be the second consecutive legislative session with a heavy focus on schools.

As expected, many of the bills touch on the most contentious national and statewide issues in education, like grade-level standards, teacher pay and school funding.

Some issues, like raising teacher salaries, already have signs of bipartisan support from both lawmakers and community members. Others, like mandatory homework and kindergarten attendance, do not necessarily align with previously expressed priorities of lawmakers, and are less likely to make it out of committee.

The proposals come at a time when Mississippi students have shown stagnant growth on national standardized tests. A recent report from Education Week ranked Mississippi's student achievement at the bottom of all states and the District of Columbia, lower than the previous year. The state has underfunded its schools by more than $1 billion over the past six years, and has one of the lowest average teacher salaries in the country.

In her short tenure in Mississippi, new state superintendent Carey Wright has emphasized a need to focus on funding preschool and improving literacy instruction. Prekindergarten and literacy coaches were two of the reforms passed during last year's session, but limited funding has led to a stunted roll out of both programs.

This year, there are several bills that would provide teacher pay supplements or raises. One proposal would raise the starting teacher salary for Mississippi teachers with a Bachelor's degree from less than $31,000 to $37,000.

Lawmakers have also proposed revisions to the state's school funding formula to determine funding based on student enrollment, or "membership." The Mississippi Adequate Education Plan (MAEP) has only been fully funded twice since 1997. The formula currently calculates funding based on average daily attendance, which some say is inadequate because districts hire teachers and buy supplies based on the number of students enrolled, or the "average daily membership."

The debate over new Common Core State Standards, which Mississippi adopted in 2010 to replace its relatively weak previous standards, could also continue during the session. At least two bills call for the state to declare a moratorium on the standards, which are already widely taught in classrooms across Mississippi. A separate bill implores the state to pull out of an 18-state consortium that designed the new, computer-based Common Core-aligned assessments, set to debut in 2015. Instead, it proposes that the state replace current high school subject area tests and the upcoming Common Core-aligned assessment with the ACT test.

Several pieces of legislation could bring big changes to the amount of time students spend in school. House education committee chair John Moore proposed to shorten the school year from the national average of 180 days, to 175 days. Other lawmakers are seeking to change the compulsory attendance age from 17 to 18, make kindergarten attendance mandatory, and increase the penalty for parents whose children accumulate absences. Under a new proposal, each day that a child has an unexcused absence could count as a separate criminal violation for the parent or guardian.

Also included in the proposed legislation are several bills that seem to counter recent education concerns in the state. Some critics of reforms like Common Core worry that teachers are losing autonomy in their classrooms. But a few proposed bills could potentially impact that autonomy, by requiring such things as mandatory daily homework, or a required curriculum for certain topics.

Here's a look at topics of additional proposed legislation:

• Prekindergarten and charter schools: Several bills revisit some of the biggest reforms passed last year. One House bill would establish a state lottery system, with 18 percent of monthly proceeds devoted to a state prekindergarten program. A Senate bill would allow the new Charter School Authorizer Board to approve charter schools for special education students, without the approval of local school boards. (Nationwide, charter schools tend to enroll fewer special education students than other public schools.)

• A new statewide school district: One Senate bill and a separate House bill seek to establish an "Achievement School District," which would consist of various state schools that have been rated as failing for three consecutive years. The district would be managed by the state's Department of Education, and is similar in theory to Tennessee's Achievement School District, which is made up of the state's bottom five percent of schools.

• Mandatory curriculum: One bill would require school districts to teach "home economics" and "family dynamics" to seventh, eighth, and ninth graders. (Topics of instruction include financial management, abstinence, and early child development.) Several bills would mandate instruction in cursive writing, while another seeks to add at least a half-hour of instruction within a school's United States Government class to address voter registration and the voting process.

• School board experience: On a similar note, a Senate bill would require school board members have at least two years of postsecondary education from an accredited college or university. (According to census data, more than 50 percent of Mississippi residents have no more than a high school diploma and would be ineligible. Another 22 percent have "some college but no degree.")

• The pledge of allegiance: One bill by Representative Mark Formby seeks to withhold state funds from school districts that fail to "properly display the national and state flags or lead students in the pledge of allegiance." A recent report by the Center for Education Innovation found that in districts across the state, a lack of state funding has already forced schools to eliminate teaching positions, raise class sizes, and cut teacher aides.

This story was produced by The Hechinger Report, a nonprofit, nonpartisan education-news outlet affiliated with Teachers College, Columbia University.