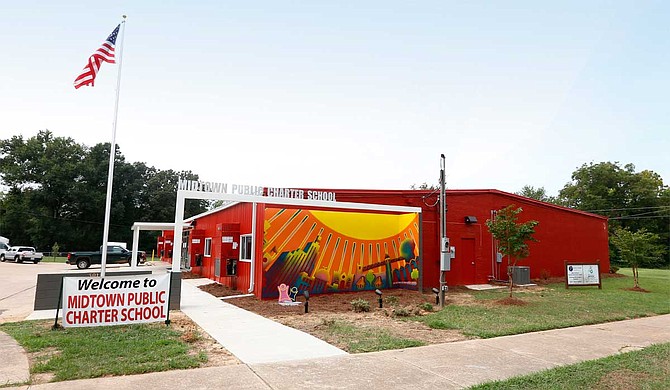 Midtown Public Charter School in Jackson increased its academic performance from an F to a D since 2018, a PEER committee report found. Photo by Imani Khayyam

The Dec. 10 PEER report found that performance grew from an F to a D at Midtown Public Charter School; from a C to a B at Reimagine Prep; and from a D to a C at Smilow Prep.

Earlier this year, Jackson City Councilman Melvin Priester, an early skeptic of the charter school program, told the Jackson Free Press that he was "surprisingly pleased" by the performance of the Mississippi Charter School Authorizer Board, or MCSAB. When Mississippi first approved charters in 2013, he feared the state would be too lax, and allow operators to open too many charters too quickly.

"I think (MCSAB has) veered more towards caution in allowing new charter schools than opening the floodgates," Priester told the Jackson Free Press in September. "When it first happened, I was really concerned it would just be 'let's let anybody who wants a school have a school,'" he said.

"What you do have readily available is the test score data, which shows that, as a whole, students are showing more proficiency in various subjects, particularly math," he said. "So we haven't had sort of the New Orleans model occur where it's just 'let's open the floodgates completely, have every charter operator that wants to come in come.' And I also think there's not been as much interest in the Mississippi charter market as the charter advocates initially believed."

New Orleans converted all of its public schools to charter schools several years ago. The Louisiana city's charter school program is currently under scrutiny, after a report last month revealed that 35 out of 72, or nearly half, of its charter schools got D or failing grades this past year.

Five charter schools operated in Mississippi during the 2018 to 2019 school year, including four in Jackson and one in Clarksdale. Those schools served 1,505 Mississippi students. Altogether, the State spent $8 million on the schools, which also received $9 million in federal and local funds. The PEER reported criticized the MCSAB for failing to require charter schools to report financial information in the same format as public school districts, making it difficult to draw comparisons.

While Priester told the Jackson Free Press earlier this year that he was impressed with the charter board's performance, the new PEER report criticized the board for not opening additional high-quality charters more quickly.

The board has not done enough to meet the objectives of a $15 million federal grant Mississippi received in 2017, the report claims. When MCSAB applied for the grant, the report says, it presented three objectives: "Increase the number of new, high-quality charter schools launching in Mississippi by at least 375 percent (from 4 to 19) over the next five years to create 15,000 new high-quality charter school seats;

"Support all charter schools in earning an 'A' or 'B' letter grade on Mississippi's statewide accountability system or significantly (improve) by advancing two letter grades from their rating by their fourth year of operation; Advance MCSAB's standing as a national leader in authorizing quality."

While the board said in the grant application that it aimed to increase its charter schools from four to 19 by the end of the five-year grant, the board has only approved five new schools since, bringing the total to nine. That includes one school it approved this year.

In its grant, the MCSAB estimated that the 19 projected schools would serve at least 15,000 school children by 2022. The nine schools approved so far amount to just 3,100 seats, though, meaning the board will need to open schools with 11,900 more seats in the next three years to meet its goals.

While he is impressed so far, Priester said he is taking a wait-and-see approach before making a definitive judgment. Right now, he said, the charter pool is so small that he does not think that the amount of funding they are pulling from Jackson Public Schools is "too noticeable."

"It may have been the goal to have a very tight charter market. I don't think it is," he told the Jackson Free Press. "Right now we have a very narrow (set of) pretty high quality charters right now. But it's also very new. Let's give it a few years and see where we are. I think it's commendable that we have had, by and large, successful charter operators."