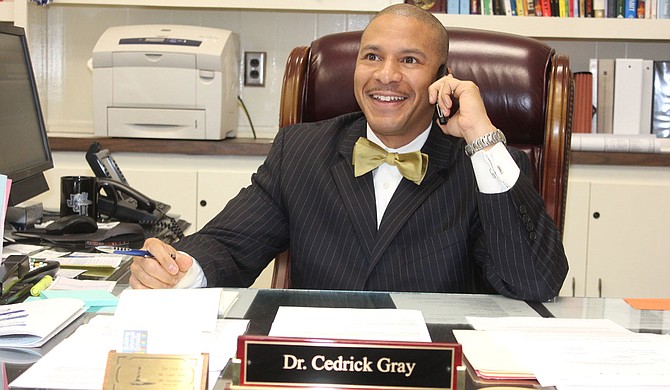 Gray, who has been with JPS since 2012, doesn't profess to be a financial wiz. Rather, he has implemented a rigid system of goals and strategies to help his administration make tough budget decisions.

Acronym aficionado Dr. Gray calls this a system of three "wildly important goals," or WIGs, which are to increase academic performance, raise average daily attendance of students and staff, and recruit and retain employees, including faculty.

"'How does it connect to one of the three wildly important goals?'" Grays said he asks his staff when they want to make a big purchase. "'If it doesn't, then don't bring it to me.'"

As a result, JPS is boasting improvement in several areas. Last week, the Jackson Public Schools Board of Trustees granted a one-year contract extension to Gray, citing high academic performance and progress in a number of other areas, including the number of F-rated schools in the state's largest urban district that fell to eight from 17. The number of discipline incidents also dropped by 1,000 between last school year and the current year.

In a February report, AdvancED, an accrediting organization also gave JPS high marks for improving transportation, IT systems and surveying its parents. JPS Board

The Cost of Unfunded Mandates

Forcing schools to walk a budgetary tightrope, and do more with less, itself comes with a price tag attached.

For example, Gray said JPS has implemented "creative scheduling" for teachers to pow-wow about everything from test scores and grades to discipline—long gone are the days of teachers goofing off in the faculty lounge. Also, to prepare students for the so-called 3rd grade reading-gate test, which takes place this week, JPS had to devote some of its staff to test prep because the Legislature failed to provide money to hire enough literacy coaches, Gray said.

"It's not only a money issue, but a human-resource issue," Gray said, pointing out hidden costs of advertising, recruiting and training staff associated with unfunded legislative mandates such as the 3rd grade gate, which requires students to show proficiency before going to 4th grade.

In shortchanging public schools the bare minimum amount they need to operate, the Mississippi Legislature essentially just passed a tax increase on citizens. In the most recent round of budget negotiations, lawmakers boosted MAEP funding by $110 million compared to last year, but full funding remained short by more than $200 million.

The Parents' Campaign, a Jackson-based education-advocacy group, analyzed what it calls the shortchanging of public schools in a report published April 9. Its information shows that JPS, the state's second largest school district by enrollment, should have received $142.4 million by state law but ended up with $11.6 million less for a total state appropriation of $130.7 million.

Since the last time MAEP received full funding, in the 2007-2008 academic year, the Legislature has shorted JPS $98.6 million behind only DeSoto County School District, the state's largest.

The amount of JPS underfunding equals $67.05 per Jackson resident. The per capita burden on the citizens of Clinton, one of the wealthier districts, is even higher than in JPS. Clinton School District's $1.9 million MAEP shortfall works out to $75.34 per resident.

All together, Mississippi schools have received $1.7 billion less than full MAEP funding since 2008. When the Legislature shorts schools, local taxpayers feel the pinch. Each year, JPS crafts its budget and presents it to the Jackson City Council, which sets the millage—local property tax—rate to cover the district's request.

City Council Vice President Melvin Priester Jr., who chairs the council's Budget Committee, says if JPS received more money from the state, the district wouldn't need as much from the city.

"When the state chooses not to adequately fund education, local municipalities have to fill the gap. Taxes in Jackson are higher in Jackson than surrounding communities, and JPS is a huge driver of that," Priester said.

Priester, who represents Ward 2, points out that starting next fall JPS will also have to contend with the state's first two charter schools, Reimagine Prep in south Jackson and Midtown Public Charter.

Charter schools are privately run by nonprofits, but use public tax funds for operating expenses. Those schools, the fruit of years of legislative and philosophical wrangling, will also have to make do with less than their MAEP requests.

The Legislature authorized the creation of charter schools in 2013 after a number of unsuccessful attempts and ideological battles between Democrats, who generally oppose forming new charter schools without fully funding MAEP, and Republicans who widely consider the existing public-school system to be a failure.

These philosophical battles can end in policy overhauls. In the most recent legislative standards, some conservative lawmakers wanted to dismantle the Common Core education standards, which they believe is a federal government takeover of education. That effort failed, but an appetite exists in some political circles to revisit the issue next session.

If Common Core goes away, Dr. Gray said JPS and every other school district will again have to shift—and that will come at a cost.

"The biggest thing that boggles my mind is how do you keep up when the standards keep changing?" Gray asked.