ICE Raids 'Fire From Our Hellish Past,' Rights Leader Says in Canton 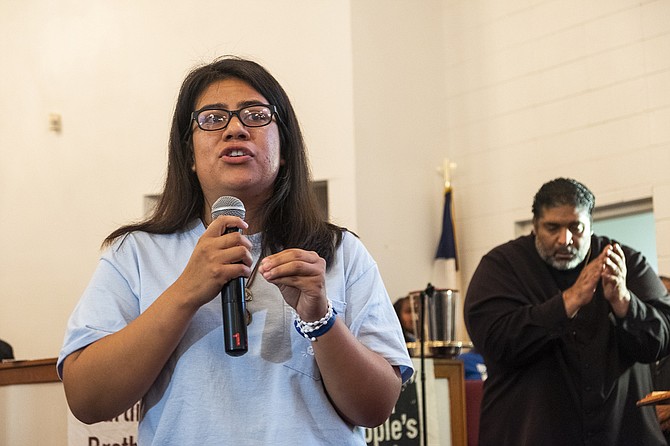 CANTON, Miss.—Daisey Martinez fought back tears as she told an audience at a Mississippi church, including Rev. William Barber of the Poor People's Campaign, about her mother Maria, an undocumented immigrant from El Salvador who could be forced to leave the country and not allowed to return.

"My mom has been here over 25 years, and she still doesn't have permanent residency. ... Twice, I didn't know if I was going to see her again," Martinez, a citizen born in the U.S., said.

Martinez's mother was an undocumented 16-year-old when she first entered the country while fleeing conditions the Salvadoran Civil War created. She was given a court date, but could not get there. She eventually returned to El Salvador to care for her own mother. The second time she came into the U.S., to be reunited with her children, she was arrested at the border but released. Martinez, who is now over 21 years old, is co-sponsoring her mother's immigration paperwork.

A community organizer who has spent the last month supporting Latino families whom the ICE raids in Mississippi affected, Martinez delivered her testimony alongside other community members during a mass meeting at the Liberty Missionary Baptist Church in Canton, Miss., on Thursday evening.

Canton was one of six locations in Mississippi where, on Aug. 7, ICE conducted the largest single-state, one-day series of immigration raids in American history, resulting in the arrest and detainment of nearly 700 people. Other raids were in or near Carthage, Sebastopol, Morton, Bay Springs and Pelahatchie.

Rev. Barber, who leads the Poor People's Campaign alongside Liz Theoharis, delivered a robust sermon urging attendees to consider the raids in the context of America's long history of racist policies.

"Racism toward people of color" and "violence against progressive white people that dare to stand up" is not just about Donald Trump being president, Barber said.

"It may be Trump-exacerbated, but it's not Trump-created," Barber added. "... Let's stop saying Trump. Let's say Trump and his enablers, because if (U.S. Senate Majority Leader Mitch) McConnell and your two U.S. senators, Cindy Hyde-Smith and Roger Wicker ... would join with the people in the House, they could stop Trump."

In their campaigns for U.S. Senate last year, both Wicker and Hyde-Smith touted a statistic on fivethirtyeight.com, which showed they voted Trump's way on major legislation an overwhelming majority of the time. Trump traveled to Mississippi twice to campaign for Hyde-Smith in 2018. At every campaign stop, the senator told supporters she voted with Trump 100% of the time, and promoted their relationship with a blown-up image of the two of them on the side of her campaign bus.

"We haven't dealt with the lies of yesterday," Barber said, referring to the recent raids as a continuation of a tradition of exclusionary policies, such as the 1882 Chinese Exclusion Act and Japanese internment camps during World War II. "What they are doing is calling the fire from our hellish past. ... What they have done is blown on the fire, blown on the coals and given oxygen to the smoldering fire of racism, and now it is bursting into flames."

Racism is not simply about hurtful words, he said, but about policies.

"This is systemic policy—violence and racism promoted by the president, but enabled by the U.S. senators here, the government here, and anybody who is not standing up to it. And it is a violation of our moral responsibility to members of the human family," Barber told the Jackson Free Press.

To enact change, Barber called for a mass voter-registration movement and a series of actions in Jackson and other cities.