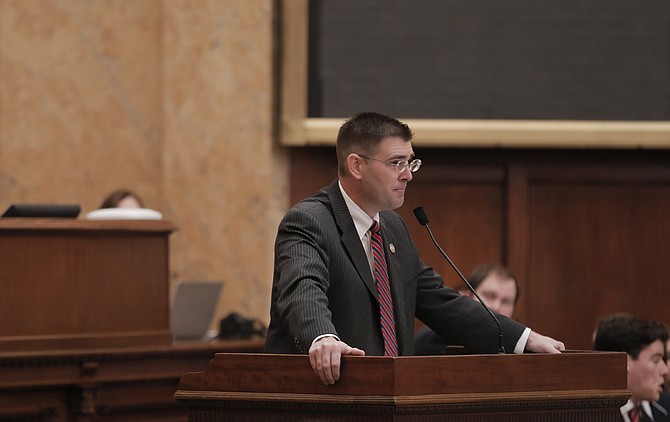 Rep. Andy Gipson, R-Braxton, asked the Mississippi House to send the re-entry bill to the governor's desk, which it did on Wednesday, March 14. Photo by Imani Khayyam.

JACKSON — If Gov. Phil Bryant signs House Bill 387 into law, Mississippians will not automatically go to prison or jail if they do not pay fines or court fees. The legislation designates a defendant at or below 125 percent of the federal poverty guidelines as poor in the legislation, and judges must take that into consideration when assessing fines and fees.

A judge "shall make an individualized assessment of his or her ability to pay based on the totality of the circumstances including, but not limited to, the defendant's disposable income, financial obligations and liquid assets," the bill says.

Rep. Andy Gipson, R-Braxton, took the measure up on Wednesday and asked the House of Representatives to concur with the Senate's changes. The House voted to send the measure to the governor's desk. HB 387 also allows inmates who are not habitual offenders or convicted of sex or violent crimes, or drug trafficking to be eligible for parole after serving 25 percent of their sentence.

A group of clergy came to the capitol last week to vocalize their support for the measure, as well as John Koufos, a former felon who is now the national director of reentry initiatives for the Right on Crime organization, a conservative group supported by the Koch family.

"We must continue to reduce our reliance on incarceration," Rev. C.J. Rhodes said in a press release.

The legislation contains elements that show that legislators intend to continue studying how the State can evaluate and monitor its justice system. HB 387 directs the Joint Legislative Committee on Performance Evaluation and Expenditure Review to conduct a detailed census of juvenile detention centers, county and municipal jails, including offenders' race, gender, offenses and length of sentence. The bill also creates the Mississippi Sentencing Disparity Task Force to look at the disparities in how judges sentence individuals for certain crimes throughout the state.

Gov. Bryant vetoed this measure last year after objecting to some language that could have made certain habitual offenders parole-eligible after serving 25 percent of their sentence. Lawmakers removed that language from the bill this session.