Lumumba 'Eager' for New Zoo Management Company to Take Over 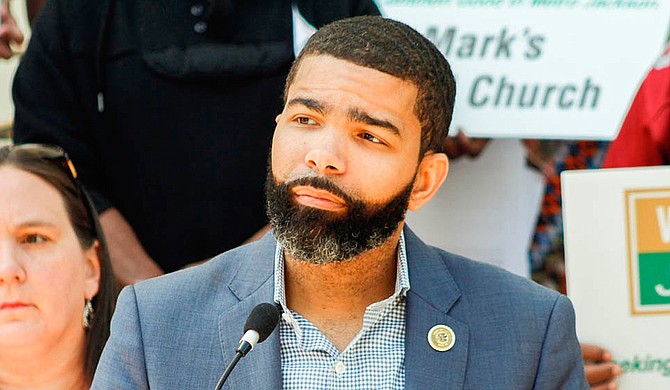 At an Aug. 13 press conference dedicated to the Jackson Zoo, Mayor Chokwe Antar Lumumba spoke about plans to bring in a new management company to run the facility. He is pictured here at an April 2018 press conference about the zoo. Photo by Stephen Wilson.

JACKSON — Mayor Chokwe Antar Lumumba hinted that the Jackson Zoological Society's time as the managing entity of the Jackson Zoo could be coming to a close. The Aug. 13 press conference dedicated to the zoo marked the first time the mayor spoke publicly on the issue since Beth Poff resigned as executive director. She stepped down after it emerged that she had misused state-issued bond funds to meet payroll in past years.

The mayor began his remarks with a message of gratitude for Poff's service and quickly pivoted to his vision for the zoo. "At this time we are eager to bring on the new management so that we can push the Jackson Zoo in a new, positive area of growth," he said.

The City will continue to work with the Jackson Zoological Society as local officials move to bring in a new management team on a very short timeline, the mayor said. He anticipates releasing the request for proposals to solicit a new management entity over the zoo this week, pending legal review.

Mayor Lumumba would not directly answer reporters' questions as to whether or not the Jackson Zoological Society, which has operated the zoo since 1985, will be among consideration as the future operator.

"I will say the operation of the zoo will be considered by an RFP process, and whoever submits response to the RFP will be under consideration," Mayor Lumumba said. "And once we have a thorough evaluation that looks at the best-value-added analysis to the City of Jackson, we will determine who wins that bid."

The mayor has been at odds with the leadership since Poff announced the zoo would begin efforts to relocate to LeFleur's Bluff State Park near Flowood. He said he believes the conversation around moving the zoo has contributed to a decline in visitation of late, although a move of such magnitude would take nearly half a decade to complete, Poff previously estimated.

At the press conference, the mayor talked about his desire to develop west Jackson as the zoo also undergoes change. He said he is still working with Mississippi Home Corporation to secure a blight-elimination grant for the area around it—something he has been discussing since at least October 2017. Other areas in the city have received such grants, which require a blight-elimination partner to commit to helping with the work.

As the Jackson Free Press previously reported, MHC's Blight Elimination Program became available to Mississippi cities in May 2017, offering $20 million in grants that cities have to spend by 2020 or the funds go back to the treasury. Cities can apply for $500,000 at a time and up to $4 million total.

"We want to see a Jackson that is thriving on all ends. We don't want to see an island of wealth surrounded by a sea of poverty," the mayor said. "So as we see a downtown that is developing day by day, as we see some areas that have traditionally had a greater amount of development take place in recent years, we have to make certain that we do not leave in the wake of all that development areas that have been forgotten and left by the wayside."

Councilman Charles Tillman of Ward 5, which includes the Jackson Zoo, stressed that he wants it to be for all people.

No Fear of Beer?

The mayor said no decisions have been made on Jackson Chief Administrative Officer Robert Blaine's suggestion that the City might have to shutter the zoo to the public to save money during the transition period, even though the facility is nearly out of operational money.

The mayor, who is a strong backer of the zoo staying where it is and not moving to the edge of the city near the suburbs, urged that west Jackson cannot shoulder all the blame for the zoo's decline. Lumumba seized the moment on Aug. 13 to expound on the issues he believes contributed to its demise: mismanagement of funds, a decline in marketing and the dwindling animal collection.

"To simply put forward the notion that the zoo must move in order to succeed is a reductive analysis, for the zoo has not left its location in more than 100 years," he said.

The mayor continued, his voice growing louder and his comments more humorous, as he felt the room filled with his staff and media chuckling. His point: If people come to west Jackson when the zoo has special events such as Ice Cream Safari and Zoo Blues, how could it be more dangerous on a regular basis?

The mayor feels there is something larger we are failing to analyze and observe.

"We have to make certain that we are diligent and that we are well-versed in our data, and make certain we fully understand all the dynamics that contribute to the loss, decline in participation, or loss and decline in visitation of our zoo," the mayor said.