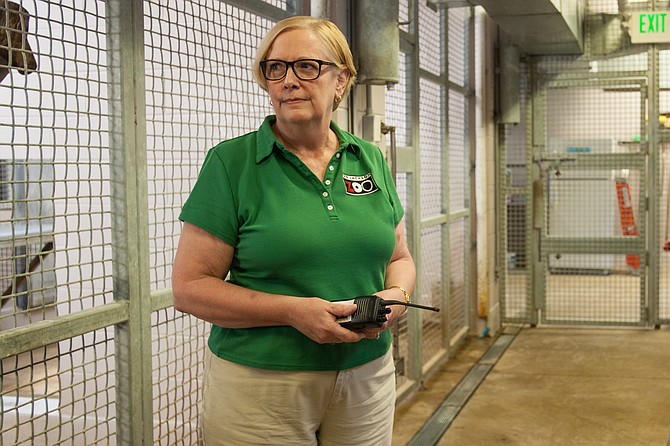 Beth Poff, the executive director of the Jackson Zoo, wants to see visible action behind fixing up the neighborhood around the zoo. Photo courtesy Stephen Wilson

JACKSON — The parking lot at the Jackson Zoo on West Capitol Street is one of the rare smooth road surfaces in the city. It is a relief from the roadway in, which is so damaged that an entire orange traffic barrel sits in a pothole. But, as soon as you get up to the ticket counter, the cracks start to show again.

One of the first exhibits on the left-hand side when walking into the zoo is closed for repair. Deep in the zoo within the water creatures exhibit, murky green water fills the beaver's swimming area.

Paul Griffin Jones III (who goes by Trey), the director of development at the Jackson Zoo, apologizes to a visiting family for the water's color before showing them how to spot the beavers by pressing their faces close to the glass to get a peek at them in the corner. He knows the zoo would need $20,000 to repair the beaver tank, but in the moment, he tries to create the best experience possible for the family from Kosciusko, Miss.

If the Jackson Zoo were a species, it would be considered "threatened" on the extinction scale.

"An animal could be threatened by poaching, environment, separation of territories or something," Poff says during a recent Jackson Free Press visit. "I think right now our (threat) is location."

Like many of the threatened animals it houses, the zoo's future potential is unclear, as it is tied up in the status of the deteriorating neighborhood of west Jackson that surrounds it.

But, with a new mayor, who ran on the promise of pumping hope back into the city his father once led, the zoo leadership is betting on revitalization both within their gates and outside them.

In 2015, 53 percent of zoo visitors were from counties outside the Jackson metro area or from out-of-state, a 2016 economic impact study found. Only about 100,000 visitors have made the trek into west Jackson to visit the zoo this year so far. Ten years ago, the zoo had almost 200,000 guests annually. But since then, even with bringing in penguins, tigers and a splash pad, attendance declines.

You can learn a lot about public perception of the zoo by visiting TripAdvisor.

"If you do attempt this adventure, I would highly recommend carrying a concealed weapon," wrote user "ry b" in a one-star TripAdvisor review of the zoo from three weeks ago.

"I also think the zoo needs to move to a brand new location in Jackson, Ms," wrote "mstwilight" of Florence, Miss., in a 3-star review from March. "A lot of people do not want to go in that area, so the zoo isn't visited as much."

With more than 200 reviews, and an average rating of 3 out of 5, not all of the reviews are totally negative, although even many glowing reviews mention the surroundings.

"The neighborhood the zoo is in has no effect on what's inside the zoo," Tish H. wrote in a five-star review from May.

"Very nice place to visit considering its location," Michael B. from Murfreesboro, Tenn. wrote in a five-star review last month.   Negative feedback about the zoo's location is keeping investors away. Poff and her team have been hoping to lure donors to help the zoo, so they developed a four-phase master plan through interactive planning workshops led by consulting firm Schultz & Williams. But, they keep getting blocked by west Jackson's reputation.

"The consultants came back at the end of November 2016 and said 'you can't raise any money,'" Poff says. The consultants apparently told her people who can write checks are in two camps: those who are waiting for the neighborhood to bounce back, and those who want the zoo somewhere else in Jackson. The rumor mill says donors would like to see it on the site of the old Smith-Wills stadium on Lakeland Drive on the eastern edge of Jackson.

The leadership at the zoo has resorted to pouring dwindling money into the facility. Over the last 15 years, Poff estimates that $12.5 million has gone into improvements throughout the zoo—though that dollar amount is not obviously reflected in its current state.

"If we were a business and had been doing that kind of investment, you would expect things to spring up around it," Poff says. "But again, it hasn't helped any."

Jones, the development director, doesn't want the zoo to become "another story of how Mississippi can't have nice things." But he is also sensitive to the fact that it is not his job to become an urban planner "responsible for the eventual redevelopment of an entire part of the city."

Poff says 42 percent of her $2.1-million budget is a city grant; about one-third comes from admissions and earned revenue; and the rest is from fundraising. Most of the zoo's revenue goes toward behind-the-scene safety features and homes for the animals. Poff says the care of the non-public spaces, more than the fancy exhibits, shows how much the staff cares.

Financially, it would cost nearly $100 million to implement all four phases of the zoo's master plan. Poff estimates that moving across Jackson would cost nearly the same. But, as Jones says, "technically, officially and truthfully," the zoo's only strategy is the master plan it developed for the current locale. Neither zoo leadership nor Mayor Chokwe Antar Lumumba want to see the zoo uproot from west Jackson.

"I think that the discussion of moving the zoo does not consider the likely astronomical costs of doing so," Mayor Lumumba tells the Jackson Free Press, "nor is it considerate of the increased void, or the void, that we would then create in the city. And it's bad planning."

Mayor Lumumba believes that both his administration and the zoo have reached a "meeting of the minds" through multiple meetings this year. One such matter that they might come to agree upon is opening the zoo's board meetings.

The city has expressed concerns in the past about the zoo's closed board meetings, especially considering the fact that it receives city funding and the mayor appoints board members too the zoo that are then approved by City Council. However, Poff says that the zoo's status as a nonprofit does not require them to host public meetings, although she is not fundamentally opposed to the idea per se.

"We don't have to have open meetings; I can't think of another nonprofit that does," Poff says. "Not that we're for or against it, but we just had never thought about it. We're going to talk about that.

Mayor Lumumba is aware of Poff's willingness to open board meetings, and he believes it is a resolvable concern.

If only the money problems were as easy. Every party involved is just as eager to see change as they are affected by the city's limited resources that make the city incapable of "putting in all the money that is necessary or all the money that we would like to for the zoo," Lumumba says.

In order to uplift west Jackson, Mayor Lumumba says he has developed partnerships with artists to create murals and moveable art throughout the streets around the zoo. The City of Jackson is preparing to apply for the first round of a blight elimination grant from Mississippi Home Corporation.

Poff has been looking forward to blight elimination for years, with particular anticipation building since 2013.

An architectural firm, Duvall Decker, released a community-inspired master plan and guidebook for the restoration of west Jackson in 2013. The developmental plan for reviving west Jackson indicates homelessness, vacant and overgrown lots, dilapidated and abandoned houses, and education as major concerns for the area's residents, and offers solutions to rectify those problem areas. Architect Roy Decker says this master plan is "not a top-down" initiative, but rather a community-based tool "empowering the residents and stakeholders to use it to better their world."

Poff then created a $100-million master plan for the zoo based on the impending revitalization of the west Jackson community that she believed would result from the master plan. But little has happened on the revitalization front to date. Now she vests her hopes in the mayor.

As Poff zips through the grounds on a golf cart, in her green polo, khaki pants, slip-on sneakers and with her walkie talkie in hand, she points out improvements made in the 12 years she has been there. Now, she's hoping to see evidence of change before it's too late.

"We just want to see visible action," Poff says. "And that can be the mayor and his cabinet; that can be active people that have been waiting for something to happen around here.

CORRECTION: In the interview for this story, Mayor Lumumba said the City of Jackson had received a blight elimination grant from Mississippi Home Corporation. The City later corrected this statement after publication to say it is still preparing for the first round of the application process. The change is reflected in the above story.